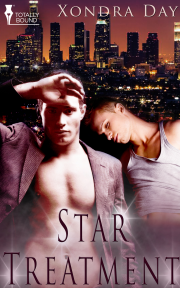 Superstar, Mark Hunter never expected his life to change within a matter of days when compromising pictures surface of him on a celebrity gossip blog in the arms of another man.

Mark Hunter, action movie star and closeted gay man is thrown into a tailspin after a night of casual sex with a cute guy named Frankie turns into something much more. Especially when photos appear on the internet, showing Mark kissing another man. Will he come out the other end with his career intact, and will Frankie reveal his secret before Mark has to find out the hard way?

Mark Hunter sat in Rav Stanton’s office and listened. For once in his life, he was scared—scared of what could happen, scared of the possible realities he might face.

Rav sat beside him. Together they watched as the computer screen came alive with the graphics from that chubby celebrity gossip’s page.

“Just look at that,” spat Rav. “How could anyone look at that without being sick? Rav pointed to a horrid unflattering picture of the gossip himself. “You’d think with his money he’d be able to look after himself at least.”

Mark agreed, but he wasn’t in his agent’s office to criticise the looks and grooming habits of some hack journalist turned gossip-queen.

Rav summoned him just an hour ago, citing they needed an urgent meeting and that it was better to talk in person than over the phone. The agent’s tone of voice told Mark to do as he was told. So here he was and he was not one bit prepared for what he was about to face.

“And here it is,” said Rav, clicking a link. He sat back in his chair, turning the screen towards Mark. “Feast your eyes on that.”

MARK HUNTER IN THE ARMS OF ANOTHER MAN: EXCLUSIVE PHOTOS

Following the headline, Mark read how he was spotted in one of Los Angeles most popular gay bars in the arms of a random guy who wasn’t named. Three blurry photos showed him hugging Jason, a guy he had met, danced with and, of course, flirted with. But it was just a fun night out. Perhaps he was na�ve, stupid or a mixture of both. He hadn’t seen the harm in it. Hell, he could count more than one male celebrity who played it straight to the media, but screwed around in private with guys. Most of them made him look like an absolute saint.

A lump formed in his throat, and he swallowed hard. “Fuck,” he muttered. He was blown right out of the water with this one. “Rav, I honestly don’t know what to say... I’m sorry?”

“Listen, Mark, you don’t have to be sorry for who you are. I did not call you here to rag on you about being...gay.”

Mark choked hearing the word. He never got used to hearing it when it was referenced to himself. Of course he liked guys, there was never any doubt in his mind about that—not since he turned twelve and the hormones kicked in. But back then he hadn’t even known what gay was. All he knew was that he was different, and that it was best to keep it a secret. It was ironic that, for the most part, at twenty-six he was still playing that game.

Rav closed the site’s window. “Say nothing. You may get a few phone calls requesting interviews. Redirect them to me. I just wanted you to be aware of things and how it is.”

Mark nodded. “I didn’t think that anyone would take much notice of me. I’d just finished filming at the studio and I needed to let off some stream. If I had known, I never would have gone there.”

“Listen, don’t beat yourself up over it.” Rav motioned to the computer. “That prick’s not worth it. And I’m not asking you not to have fun, if you know what I mean. Just be more discreet. There are services you can call who will provide you with top-notch companionship and they are very discreet. Heck, I can hook you up with one, if you like? I know a woman who runs one which has both male and female escorts. She can be trusted.”

Mark pondered the offer. “Naw, that’s not for me. I’ll lay low and deny everything if asked. That’s the best thing to do.”

Rav opened a drawer in his desk and extracted a small white business card. “All the same, call her if you need to. Just tell her that Rav sent you. She will take care of the rest.”

Mark glanced at the card. “Thanks.”

“I just don’t want to see you go down in flames, buddy.” Rav placed one hand on his shoulder. “You worked hard to get where you are, and with two hit films back to back and another about ready to clue-up, you’re a hot commodity in this town.”

“I suppose,” replied Mark, standing up. But at what cost? Was all this worth living a lie? Was it worth the hiding and looking over his shoulder? He liked Rav, he trusted the man. Heck, Rav was more of a father to him than his own had ever been.

“Call me if you need me, Mark. We’ll get together soon. I may have something else lined up for you.”

Xondra Day is a lover of all things romantic. When not penning her next work, you can find her indulging in her love of photography and many other hobbies. She can be reached at xondraday@yahoo.ca

Reviewed by Markie: When photos appear on a celebrity blogger's site showing superstar Mark Hunter in the arms of another man, he has two choices to make. He can either deny everything, or come out...

Want to get yourself all in a tizzy while at the same time raising your fisted hand in support of two men who are clearly made for one another? Then buy Star Treatment.

Share what you thought about Star Treatment and earn reward points.