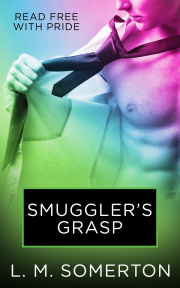 Conor Trethuan attracts trouble without even trying, and according to his boyfriend, Alex, shouldn't be allowed out alone. Conor only confirms this opinion when, whilst investigating evidence of smuggling activity near his remote holiday cottage in Cornwall, he discovers more than he bargained for. Mysterious lights out at sea and treasure maps might seem like the stuff of adventure stories, but the danger is all too real.

When Conor is taken by ruthless criminals intent on getting rich, faith in his lover is all he has to hold on to. If Conor is to escape the smuggler’s grasp, he'll need courage, luck…and Alex.

As I anticipated, and hoped for, this was an exciting short story addition. I really enjoyed it!

Share what you thought about Smuggler's Grasp and earn reward points.