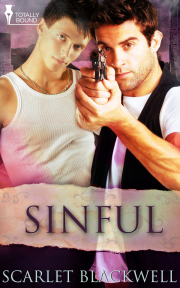 In a shattered world, Blake and Io only have each other…

Now they're on the run in post-apocalypse Canada, both afraid of the future and even more afraid that they're going to end up meaning everything to each other.

Reader Advisory: This book is a sequel to Sin Row.

Blake Astor smoothed the cold compress over the forehead of the dark-haired man in the hotel bed. The curiously named Io Spencer had a fever. That was what you got when you fled the hospital after a gunshot wound. It was all Blake’s fault. He had become embroiled in the life of the hottest whore ever and had paid the price. Blake’s partner, Ronnie, had been shot dead and Io had killed his pimp, George. Blake had taken it upon himself to flee the ruined city of Machan with Io in search of something better.

There never was going to be anything better. The United States and parts of Canada were a post-apocalyptic wasteland, peopled with cops more corrupt than Blake had ever been and criminals who called the shots. They had entered Vancouver yesterday and this city’s beauty was devastated too, encroaching winter nights cloaking the crumbling ruins of towering skyscrapers.

Io stirred restlessly, his cheeks glowing red, his lips dry. Jupiter’s closest moon—that was Io, named after some Greek mythological creature. Obviously Io’s mother had had a screw loose-indeed, his mother had been ‘locked up’-but it kind of suited him. Never had Blake fucked anyone so exotically named before. Never had he fucked anyone quite so beautiful.

He sighed, stroking Io’s damp hair. This hadn’t been part of the plan. Life for Blake had been about abusing his position of power and getting his rocks off at every opportunity with whichever resident of Sin Row would suck his cock. It wasn’t about falling fast and hard for a whore with lips made for sin and forest-green eyes you could drown in. It wasn’t about giving it all up and running away like Romeo and fucking Juliet. But Blake’s cock hadn’t been in charge as usual, or his head. His seldom-troubled heart had taken over, and Blake had rolled over and submitted to it. It had told him he wanted Io. No matter what.

Io’s dusky lashes fluttered. Large green eyes focused on his. Io smiled. "I like it when you’re my nursemaid."

Blake glowered at him because, even now, two days into this adventure, that needling antagonism between them hadn’t been lost. Blake needed it there to maintain the front. That buffer between Io and his heart.

Io laughed softly, which turned into a dry cough. "Perhaps you could get one of those PVC uniforms?"

"Perhaps you could shut up?"

"Killjoy. I’d like to see you in a tight little rubber dress. Bending over so I can see you’re all man."

Blake’s loins stirred against his will, even if cross-dressing wasn’t his thing. He was all man, all right. Many men could testify to that. "Maybe I’d like to see your pretty mouth gagged. You always did talk too much."

"And the only way to shut me up was to put your cock down my throat, right?" Io’s eyes gleamed.

"Nice image. Sit up." Blake supported Io beneath his shoulders and fed him Tylenol. After slipping the pills into his lover’s mouth, he held a glass of water to Io’s lips.

Io collapsed back. A smile lit up his pretty face. "I had such dirty dreams about you, Blake." He sank into sleep.

Blake sat back, his hands clammy and his heart beating hard. Christ, the man he had once been might have taken Io regardless-pushed those legs open and thrust into the feverish body.

Now that wasn’t his style. Now Io had crawled inside him and entwined himself around that lump of muscle in his chest Blake had always considered to be dead.

Blake took a massive chance and took Io to the free clinic downtown. What other choice did he have? Io had an infection in his bullet wound and needed antibiotics or he would probably die. They might have been trying to evade the law but Blake wasn’t ready to sacrifice Io for it.

"If I’d been working, I could have passed my card around."

Blake looked at him with a raised eyebrow. "You have business cards?"

"Sure. They have a list of my prices and my dos and don’ts."

a wickedly steamy tale...Wounded souls attempt to find their own brand of happiness in the highly provocative and unapologetic Sinful.

Share what you thought about Sinful and earn reward points.