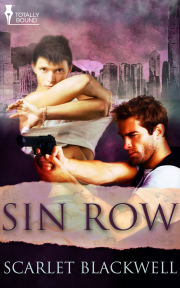 On Sin Row, the cops are more bent than the criminals…

Getting sexual favours from rent boys on Sin Row is a perk of the job for corrupt cop Blake Astor and his partner Ronnie Kemp.

When Io Spencer appears on the scene, though, Blake's seldom-troubled heart gets involved.

When things escalate out of control, is he prepared to risk everything for Io?

Reader Advisory: This hard hitting book has sex scenes that some may consider contain dubious consent. The are also scenes of double penetration and ménage à trois.

On his way to work, Officer Blake Astor encountered a robbery at the gas station. Some lawless hoods intimidating the frightened attendant with baseball bats. Blake drew his gun from the glove box and saw them off. He squeezed off several shots as they ran down the road. Satisfied, he tucked the gun into his waist, then drove away without paying for his gas, waving at the attendant. Such was the society he lived in.

It was dog-eat-dog in this city, where the cops were as bent as the criminals and Blake took advantage where he could. The only way to survive was to look out for number one. And Blake did. His fondness for sex just edged his fondness for money.

Everyone did what they could to make their way in this nightmarish, post-apocalyptic world of 2021. Just below the Canadian border, the city of Machan stood in ruins, sinister remains of shelled buildings looming over it. Black market trade was rife, the most common commodities going for hugely inflated prices. Blake pitied the children born into this festering hellhole. If he could escape, he would. But it would only be to run to somewhere equally devastated.

He nodded at several hustlers with whom he’d exchanged bodily fluids as he cruised down . Blake’s philosophy was simple when it came to arresting people. If you had something he wanted, he would take it in exchange for letting you go. Some of these boys were very proficient at their jobs and he considered it a fair exchange. If you made him happy, he made you happy.

He had his mind on yesterday’s whore when he left , turned into Police Plaza and parked. The curiously named Io Spencer who had sucked Blake all the way to heaven and then some in the interrogation room the previous afternoon. A smart-mouthed little hooker who’d done it with relish.

Blake trotted up the steps into the building, nodding at the desk sergeant. Down the corridor in the locker room, his partner, Ronnie Kemp, greeted him. Ronnie and Blake made a good team, for Ronnie was as keen as Blake to milk the benefits of being a cop. He was clearly keen on Blake too. Blake was kind of interested. Ronnie was a six-foot tall hard-body with blue eyes and blond hair, and Blake would have been blind not to notice.

“Night shift picked up Io Spencer again this morning,” Ronnie told him. “Thought you might like to know.”

A lascivious thrill snaked down Blake’s spine and settled in his pants, hardening him. “I’ll deal with him personally.”

Blake shut his locker and glanced at himself in the mirror on the wall. His palms were oddly damp. He smirked at Ronnie and left the room.

The interrogation room in which Io Spencer had been placed was the one without the two-way mirror. Blake was kinky but even he didn’t want an audience. It contained a table and two chairs and there was wire mesh over the window. Blake pushed the door open, closed and locked it.

A dark-haired man lounged in the chair, arms folded. He turned his head. “Ah, Officer Astor. I’ve been waiting for you.”

Blake strode forward. “You have?”

“Yes. I got the feeling you’d want to see me again.”

Blake didn’t like that. Had it been so obvious to this man how much he’d enjoyed it last time?

a dark fantasy set in a future world that mirrors today's world. Optimism has been replaced by the need for survival...an impressive, as well as enjoyable saga highlighting the tough life of a...

Share what you thought about Sin Row and earn reward points.