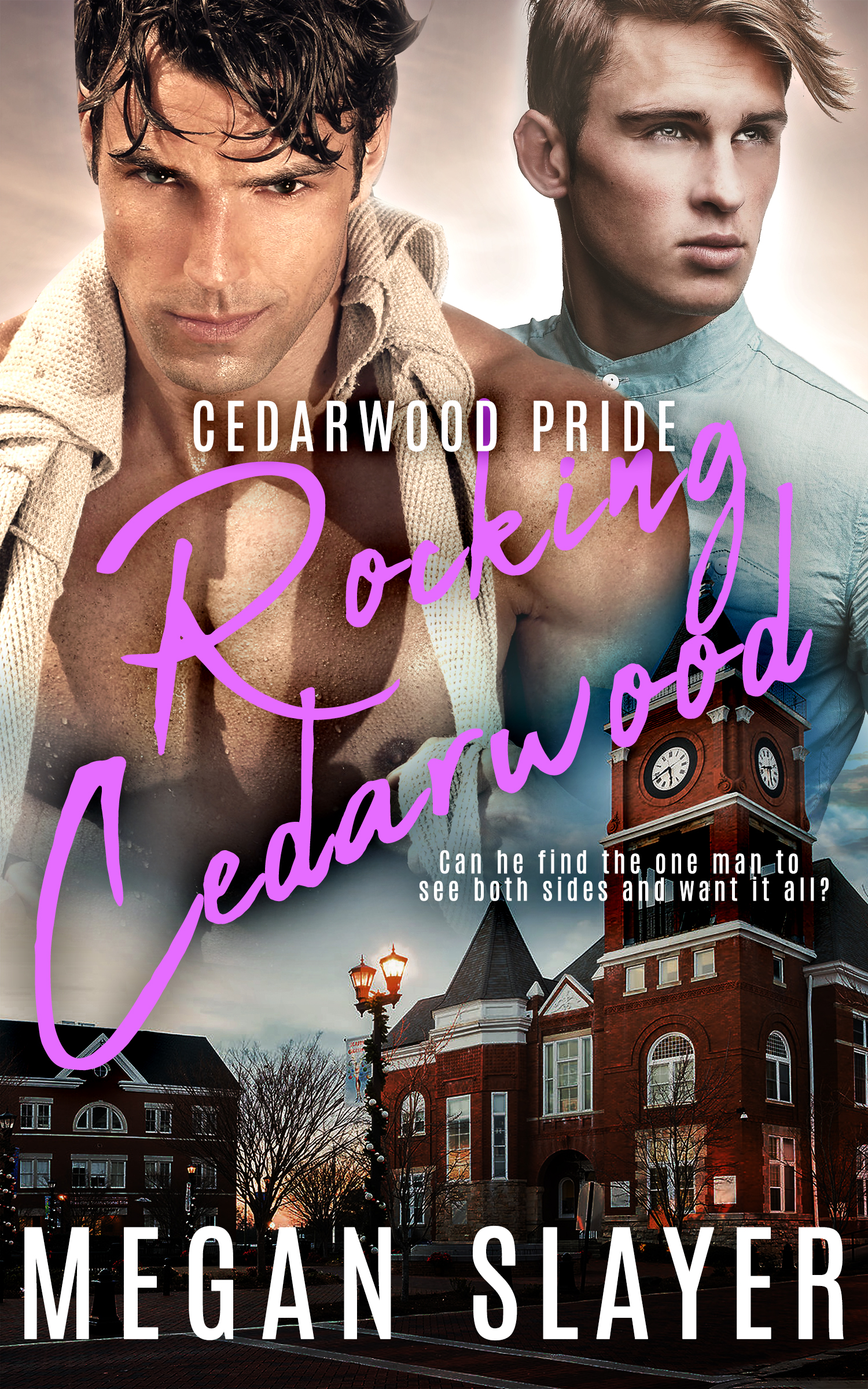 Book 5 in the Cedarwood Pride series

Can the geeky teacher moonlighting as a rock-and-roll metal god find the one man to see both sides and want it all with him?

Ever since Michael Jepsen walked into Cedarwood Elementary and spotted Niall Grayson, he’s been hooked. He wants to explore every inch of the sexy third-grade teacher in all sorts of hot ways. But Michael has a secret—during the summer months, he morphs into his alter ego, Bandit, and rocks stages all across the country. Can he keep his job at the school while living the rock-and-roll lifestyle and snag the man of his dreams?

Niall Grayson never thought he’d catch Michael’s eye. Becoming more than good friends never crossed his mind. He’s not good at letting people into his private life and he prefers to keep his heart guarded, but something about Michael makes him want to open up. Will he be able to accept the different facets of Michael or will the relationship fail before it gets started?

These two are determined to rock Cedarwood to its core.

Publisher's Note: This book was previously released elsewhere under a different title. It has been revised, expanded and reedited for release with Pride Publishing.

Michael Jepsen rolled his shoulders. He needed to stay in shape—the more he punished his body, the better he’d feel. Doing two hundred crunches served him better than losing his cool in the classroom. Plus, being at peak physical sharpness meant he’d perform better on stage.

He snorted then admired himself in the mirror. When he’d hired on at Cedarwood Elementary, he hadn’t thought his music career would go anywhere. He had the drive and the ability to play his songs, but so did every other starving musician. But most of them hadn’t pursued a teaching degree, employed by a small school district and parlayed the experience in front of fourth graders into better stage presence during their shows. But he had done all three. He’d succeeded when others might have quit.

He started the seemingly endless number of crunches, but his mind wandered. When he entertained, he commanded the throngs of fans. If he screamed, they did, too. If he told them to put their hands up, they complied. In the classroom, he held up his hands to silence his students. Sometimes it worked…and sometimes not.

But his students didn’t know his other identity. Wouldn’t they be surprised if they found out their teacher sang heavy metal music? Would their parents be okay with the knowledge? They’d have a fit. If they knew he was gay on top of everything else…the parents and the coalition in Cedarwood would have his ass. He’d lose his teaching gig. Still, his students might like seeing his stage makeup and learning about where he’d gone on tour.

He finished the first hundred crunches then stopped and mopped his brow. Being a semi-famous musician was great and all. He loved that part of his life. But the true issue was his loneliness. Only two people outside the band knew the truth. Jesus. He received thousands of comments on his social media, letters and even a few gifts through his lawyer, but the fans loved the image—not the real man. He wondered if some of them even considered there was a human being beneath the makeup.

He sighed then finished the second set of crunches. When he’d completed the reps, he stood and stretched before making his way to the weight machines. What would happen if he found someone he wanted to share his life with? Would the fans revolt? Would that man understand his dual life? He set the weight limit then positioned himself at the handlebars. He worked his triceps and biceps, but his mind wandered again. He should be focused on what he was doing or he’d lose count… He could get hurt, too. But, Jesus. He, Bandit of Bandit and the Blackhearts, was doing a workout in the county metropark recreation center complex. He wasn’t in a special fancy home gym with a trainer. Just him in public. His fans would balk. He was so accessible—if the right people found him out. Until he opted to tell his secrets, no one would know.

Michael glanced out of the window and noticed a figure on the walking path. Most people used the limestone trail to walk. A few used it for running. Most runners tended to take the dirt paths instead. He paused. He knew this runner. Niall Grayson. He’d been drawn to the cute man so many times but had kept things light. But damn. Niall looked hot in those tight running shorts, sweaty and glistening in the late-day sun.

Michael finished his current rep then wiped off the bar. He could be running with a buddy instead of shredding muscle alone. Would Niall appreciate company? Michael wouldn’t know until he asked. Michael toweled himself off then abandoned the towel in the bucket before making his way out to his locker. He hydrated and grabbed his armband from his bag. He tucked his phone into the band. Before he did any running, he needed tunes. He and Niall talked every so often, but why not try getting to know each other outside the school building?

He donned his sunglasses then closed and snicked the padlock on his locker. He’d need another stretch to catch up to Niall, but the other teacher wasn’t running at a blistering pace so Michael might be okay if he joined him without much prep. He jogged along behind Niall until he felt comfortable then picked up his pace until he joined his friend.

Niall swerved and waved. “Go on,” he shouted.

Although they weren’t quite so visible, Michael noticed Niall had earbuds without cords in. Michael should’ve known Niall would need music, too. He touched Niall’s arm. “Hi.”

Niall frowned. He yanked his earbuds out and slowed his pace. “Michael?”

“It is.” Niall smiled. He stopped and scrubbed his hand across his forehead. He panted. “I need a break. I’m at the end of my fifth mile, so it’s a good pausing point.”

“I would say so,” Michael said. “Are you training for a ten-k or just like running? I’ve done two and they kicked my ass.” He winced. “Butt.” He should’ve watched his language. He had no idea if any students or parents were around.

Niall laughed and walked over to the fountain. He took a long draw from the running water before wiping his face again. “We’re not at school and I don’t mind if you swear.”

“We’re still public figures and we should have decorum.” Michael rested his hands on his hips. Talking with Niall was so easy. Why hadn’t he tried to make deeper connections with Niall sooner?

“True,” Niall said. He stepped into the shade. “I’m glad it’s finally warm—I thought the winter would never end—but I’d rather run in the cool. You can add layers, but you can’t take them off past a certain point.”

“Are you saying you don’t run bare-chested?” Now wouldn’t that be sexy? Michael could only imagine Niall in the nude. How would Niall take the news that Michael did most of his stage shows without a shirt on and wearing leather pants?

“I’m not that comfortable with my body.” Niall blushed. “It’s a long story, but I’m trying to stay healthy and active. I’ll work on my internal self-image later.”

“You’re in fine form.” He swept his gaze over Niall. Mighty fine.

“You’re not so bad.” Niall’s blush deepened. “I didn’t know you exercised here. I didn’t know you ran, as well. You’ve done ten-k races? I’m impressed,” Niall said. “That’s what I’m training for, so if you’re interested in a training buddy, sign me up.”

“Yeah.” Michael nodded. He wanted more than a buddy, but he refused to get too far ahead of himself.

“Yes?” Niall rubbed his temples. His hair stuck out, slick with perspiration. “You want me to join you?”

He’d lost his train of thought. Shit. He’d been too enamored with the sweet, sexy man who wore the running shorts too well. Michael knew down to his soul that Niall would be hot as fuck naked. Would he be a moaner, too?

“Michael?” Niall tipped his head. “Are you in there?”

“You can’t run with me. I understand,” Niall said. “No problem.”

“No, no. I’d love to run with you. We can set up a schedule and it’ll help me prep for the race.” Jesus, he’d embarrassed himself. He should’ve been paying attention. “I need a regular plan to work out and run.”

“When is the race? In case I want to join it.” If the race wasn’t during the tour, he’d be there.

“May twentieth here at the metropark. It’s right before the end of the school year.” Niall fiddled with his earbud. “I’m averaging about forty-five minutes for my race time if I go slow and thirty-seven if I push it.”

He wasn’t sure what his average time might be, but he’d do whatever he needed to in order to keep up with Niall. “I should ask if you can still sign up before I say I’m doing the race.”

“They’ll have people here to do race-day sign-ups, but you can go online, too.” Niall shrugged. “The money goes toward putting in playground equipment for special needs children.”

“Nice.” He’d sign up as soon as he went back into the building.

“Let’s go. I’ve got three more miles on this run and I want to get them in before it gets dark.” Niall tucked the earbud into his ear then pointed to the trail. “Ready?”

Share what you thought about Rocking Cedarwood and earn reward points.

Other books in the Cedarwood Pride seriesView Series Page