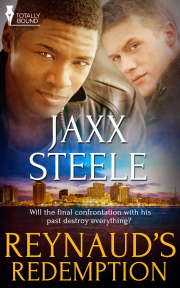 Will the final confrontation with his past destroy everything Reynaud has in his present, preventing him from having a future with Cam?

Murder, greed and jealousy have taken everything from Reynaud. His lover, his high position and his way of life are all gone in the blink of an eye. Condemned for a crime he did not commit, Reynaud must suffer the worst punishment his people can bestow. Only the love of a mentor saves him from destruction, giving him a second chance at life.

After more than one hundred years, he finally meets Cameron. Cam’s love sets him free and helps him put his life back on track, but something still nags in the back of Reynaud’s mind. He hopes going “home” will ease his weariness, but it only raises more questions. Things have changed during his absence. Friends have lost their places, and enemies have gained undeserved power.

Will the final confrontation with his past destroy everything Reynaud has in his present, preventing him from a future with Cam? Will the journey itself cost him Cameron and everything they have built together?

Reader Advisory: This book contains scenes of violence and murder.

The sun had barely crested the horizon when Cameron Gamble unlocked the doors to his café. The morning heat had already risen in the air as the sky brightened. Removing the countdown sign from the window, he replaced it with a larger, more flamboyantly decorated one indicating the grand opening for the next day. He darted outside to make sure the announcement looked straight and even, then went back indoors.

Cameron stood in the center of the room glancing around. The last month had been exhausting but exciting. It took weeks of dragging chairs and pushing tables around before he’d been satisfied with the dining room’s set-up. He spent most days hanging decorations until they were just right. The staff arrived nearly a month ago to help stock inventory, put away supplies, make the kitchen workable and do other tedious jobs necessary for opening a business. He smiled at their completed work.

“This is really going to happen…finally,” he murmured softly.

Something moving in his peripheral vision forced him to turn his head. A large brown dog stood beside him panting and wagging its tail. Startled, Cameron hopped to his right. Looking up, he realised he had left the door open. He blew out a frustrated breath and shook his head. Even after three years, he was still jumpy.

After a few calming breaths, he looked down at the dog. Cameron had seen the animal before hanging around the building while he came and went running errands, but this was the first time it had ever approached him. The dog stopped panting, moved closer to him then sat. Cameron took a step back. The dog lay down and scooted forward on his belly. Cameron stared at the canine. The dog rolled over onto its back and kicked at him playfully.

“Okay, so, I guess you’re not going to hurt me, despite how big and burly you are, huh?” Cautiously, he knelt and offered his hand. “Come here, boy. I won’t hurt you either.”

The dog rose to his feet and padded closer, his muzzle extended. He sniffed Cameron’s hand, licked it then mowed him over, climbing up Cameron’s body to lick his face.

“Whoa! Hey, you are a big boy.” Cameron laughed. He rolled across the floor, letting his new friend lick him playfully. “Okay, okay, calm down.” He sat on the floor with his legs crossed then patted his lap. The dog answered his call, laying his large self beside him, putting his head on Cameron’s lap.

“You’re the biggest dog I have ever seen,” he murmured. He glided his hand over the soft, brown fur covering the dog’s muscular limbs. “So, where is your home, big guy? Do you have a family?”

The dog blinked at him.

“Big, pretty pooch like you has got to have people around who love you. You seem really smart and well fed surely someone is taking care of you.” He stroked the animal’s neck and chest affectionately. Suddenly he stopped his hand and gazed around the room thoughtfully. “This was your home, wasn’t it, boy? The realtor did say this place used to be one of those huge houses the bank bought and renovated.”

The animal whined softly and nuzzled Cameron’s side.

“You’re all alone, too, aren’t you?” Cameron asked rubbing behind his ear. “Well, I think this place is big enough for the two of us. I’ll tell you what, if you promise not to eat me, you can stay,” Cameron told him in a humorous tone. “Would you like that, boy? Would you like to be my dog?” he asked happily.

The animal stood up and barked twice before licking Cameron’s face several times.

“Well, I’ll take that as a yes. You’ll find there are many perks to having a master that owns a bistro,” Cameron said, getting to his feet. “I guess I need to come up with a name for you. I don’t know if you’ll answer to it, but I have to call you something.” He knitted his brows in thought. “Your fur is the same color as this caramel glaze I make,” he muttered almost to himself. “How about I just call you Caramel?”

The canine sat and froze. No barking, wagging or any other movements.

Cameron burst into laughter. The dog’s mannerisms were almost humanlike. He was sure the animal didn’t like his suggestion. “Okay, no. How about we shorten it to just Mel?”

The dog barked and his tail started moving again.

“Well I’m glad we got that settled. Let’s go, Mel. The outdoor market should be opened now.”

Cameron and his new friend took the short walk down Decatur Street to the Moonwalk. The warm breeze from the Mississippi landed on Cameron’s face, pushing his bangs off his forehead. He smiled and breathed it in. Only two years had passed since he arrived in New Orleans, but it hadn’t taken him long to fall in love with the atmosphere, the people and the food. Cameron whistled happily, swinging his wicker basket as he moved along the Moonwalk from vendor to vendor, carefully looking over their goods. He came ready to start over. With New Orleans still rebuilding after Katrina, it turned out to be the perfect place for him to do exactly that. Finally, after years of looking over his shoulder, he had begun to exhale.

Share what you thought about Reynaud's Redemption and earn reward points.

When Enough is Enough

I love reading romance books about main characters that conquer whatever threatens the loving relationship they’re in. Be it inner turmoil or and physical threat, the main character doesn’t get a moments peace. My favorites are the ones that put the main character on adrenaline overload. The main character is always stuck between a rock and a hard place. He has just averted one crisis and before he can take a sigh of relief the bad guy is back throwing him into something else. That’s where Reynaud finds himself in Reynaud’s Redemption.