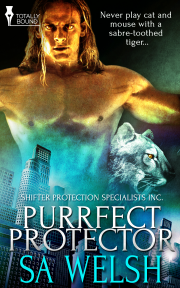 Never play cat and mouse with a saber-tooth tiger.

When Kale Andrews gets disturbing mail from an obsessed fan, his brother drags him to Shifter Protection Specialists, Inc. Kale reluctantly agrees to have a bodyguard, but when a tall, muscular blond walks into the office emanating power and a sexy dose of danger, Kale’s doubts about needing the man with him twenty-four hours a day quickly disappear.

The easy babysitting job Aleksi was promised quickly changes from strange mail to threatening deliveries, so Aleksi has to become creative to keep his protectee out of danger. Everyone knows models are self-centered and shallow, so why does being with Kale make him feel like he finally has a home? Since he’s a saber-tooth tiger and naturally dominant, most people aren’t strong enough to be with him in a relationship or even as a friend. Yet Kale seems to calm his beast, simultaneously exciting the man in Aleksi.

Neither man expects nor wants a relationship with strings, but as they grow closer, Aleksi realizes that Kale might be his mate. With an obsessed fan escalating toward murder, Aleksi isn’t sure that even his tiger can keep his mate safe.

“I really don’t see why we need to be here, Caleb. Every model in the limelight gets crazy mail. It’s nothing new.” Kale rubbed his left temple as he felt a migraine coming on. He didn’t want to be there in the first place, but his manager had insisted. Sometimes having his brother as his boss sucked.

“You’re right. Everyone in the business I’ve talked to says the same thing”—his brother held up a hand before Kale could do so much as open his mouth—“but none of them received an eyeball in a box hand-delivered to a closed set they were working on.”

Kale didn’t have a response. He was saved from trying to find one when the secretary behind the reception desk of Shifter Protection Specialists, Inc. touched her headset when it beeped then waved them forward. “Mr. McCade will see you now.”

Kale had no option but to follow his brother into the large office.

As he entered the room, it surprised him that Mr. McCade was his height and looked nothing like the picture he’d built up in his mind of a bodyguard. The company was supposed to be the best, and people in the personal protection industry whispered about it. He might not agree that he needed their protection but that didn’t mean he hadn’t done his homework before coming here.

“Welcome, Mr. and Mr. Andrews. I’m Scott McCade. I understand that you have a need for our services.” The man stood and walked to them, then he shook their hands before gesturing for Kale and Caleb to take a seat.

“Thank you, Mr. McCade. Recently my brother has received some disturbing letters and last week something that quite frankly scared me. He got an eyeball in a hand-delivered package to a photo shoot that only seven or so people knew about. I’ve talked with all of them and each one claims not to have told anyone—and I believe them.”

Scott McCade didn’t give away any of his thoughts, but Kale got the feeling the man was surprised.

“I see,” Scott said, without anything in his voice to reveal what he thought about it. “I read the copy of the report you sent me and I see you do have a problem we can help with. With cases like this one, there are certain indicators we look for. Buzz words and the like that suggest the writer of threatening mail will escalate to violent behavior. The letters you shared with me are full of them. I recommend a close protection guard be with you at all times until we can root out the person who sent them.”

Kale sighed and looked at the ceiling. He didn’t need to hear another lecture about his safety. “I’m the flavor of the month on the fashion scene right now. That is bound to attract the crazies…”

Mr. McCade nodded. “Of course. So you know other models who have received animal body parts in the mail?”

Kale stopped short. “Well…no. But…that was a real eyeball? I thought it was a prop.” He shook off the tendrils of fear growing in his gut. He’d worked too hard and kissed too many asses to be where he was—at the top of his game. There were so many influential designers clamoring for a piece of him—wanting him to do campaigns, runways and television adverts—that he had his pick of bids. Nothing was going to jeopardize that. He was twenty-five and he figured he had a three-year window in this industry before he had to switch to runway-only jobs.

It was a fickle industry but Kale loved what he did for a living.

“It doesn’t matter. Whoever it was will get bored and find someone else to focus on,” Kale insisted.

Mr. McCade raised an eyebrow but said nothing more. Kale was used to being treated as an airhead and, if he were honest, he understood why his brother was insisting on hiring a bodyguard. However, Kale needed to keep the three big jobs he had lined up—the fashion shoot in Paris, the runway in Milan and the group shoot in New York. If he made those three events his best work, then he would be set for offers for his full three-year plan and have contacts to make a career in fashion after that.

“Well, Mr. Andrews, it appears there is nothing we can do for you.” Scott McCade clasped his hands together and leaned back in his chair.

Mr. McCade cut him off with a wave of his hand. “I was talking to your brother. He seems to be the one with the sense.”

Shocked, Kale sat back. What had he done to deserve such a dismissal?

“Please. Despite what my brother thinks, this is serious. It started with a few letters every month or so, then every week to every day, and now he’s getting packages like this with cards saying ‘I’ll be watching over you, my love’. This is escalating and I don’t want to wait around to see what comes next. The hotel security where my brother lives had a breach yesterday when an unidentified male managed to gain access to Kale’s floor. I can’t always be with him when he’s on a campaign or at an event, and I don’t think I’m much protection when I am. I need your company’s help.”

Kale shot a sideways glance at Caleb. His brother was putting it on a bit thick. Sure, he had a fan who was more than a little creepy, but that was it. His hotel housed some very famous people—far more famous than him—and they didn’t take security lightly.

Caleb tightened his jaw and the vein on this brother’s forehead pulsed. His brother was really scared about this.

Mr. McCade sat forward again and placed his hands on the stack of letters Kale guessed were addressed to him or Caleb. “I can offer several protection options, but unless your brother agrees, there is nothing we can do to protect him.”

“I agree,” Kale said quietly. If he’d thought all this had really bothered Caleb so much, he wouldn’t have been so difficult.

Scott McCade looked at him with a strange expression, and Kale had the feeling that he had risen in the man’s estimation.

“Very well, then. I agree with your brother, Mr. Andrews. You need protection, but I also get the feeling that you aren’t going to be an easy protectee. You are gay, correct?”

Instantly on guard, Kale sat back and narrowed his gaze. “Yes.”

“Good. That will make it easier to explain the presence of the man I’m assigning to protect you. He’ll be your lover.”

“Yes. To explain why he’ll be on set with you, you can tell everyone who asks that he’s the jealous sort or that he loves watching you work,” Mr. McCade clarified in a tone that suggested he was already making plans and Kale’s agreement had merely been a formality.

Kale’s thoughts were confirmed when the man picked up the phone handset and asked the secretary to call in someone called Aleksi. Mr. McCade turned his attention back to them with a slight smile that Kale didn’t trust.

“Aleksi will join us in a few minutes. I hope you don’t have a problem with cats.”

Share what you thought about Purrfect Protector PRINT and earn reward points.