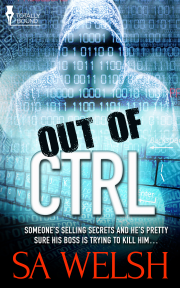 Out of CTRL PRINT

Andrew had no intention of ever going back home. But circumstances force him to face his painful past and the friend who betrayed him.

Andrew Finley has no intention of going back to his hometown—ever. After he’s caught hacking into the CIA, he builds himself a new life as a computer guy for the very government agency he hacked. But over the past few months, something has been bothering him, and his boss is acting more paranoid than usual. Every time an operation fails, Andrew collects information that could prove someone is selling secrets. Now he’s pretty sure his boss is trying to kill him, so he has no choice but to go back home to buy some time. Home may be more dangerous than facing his boss. Nine years ago, his former best friend and first crush Teddy betrayed him, and let his evil sister and her minions send him running.

But he’s back now and not everything is as clear-cut as he thought. Teddy may not be a Judas but can Andrew catch his fireman without getting burned, or is coming home going to kill him?

One corrupt boss, one evil sister, enough family drama to fill a dozen daytime chat shows and an ex-best friend whom he’s been in love with for half his life makes for one hell of an interesting trip home.

“Are you coming home for Dad’s sixtieth?” Andrew Finley’s eldest sister Sara nagged down the phone line. His family had hounded him constantly for two weeks. Why couldn’t his relatives take the hint or act like a normal family and avoid each other?

“I told you, Sara, I don’t know if I can get the time off—” Something told him this wasn’t going to be as easy as he’d hoped.

“Andrew Norman Finley! Don’t you dare try to feed me that line of crap again. The first time I let it go, but no more. If you don’t come, I’ll tell Mom why,” Sara threatened.

Sara and her boyfriend Steve, and his other sister Jenifer-Annie—Genie for short—came for a visit every few months and stayed a week, and they talked often enough in between. Why couldn’t they just continue doing that?

She might let it go. Nope. His luck just wasn’t that good.

“Cut it out, little brother. This is because of Teddy, isn’t it?”

Even hearing the man’s name made him catch his breath, sit back in his chair then push away from the desk. There was no way he could deal with physically seeing him.

What could he say to that?

“Angela’s boyfriend is none of my concern,” he replied coldly.

This was a dangerous subject for him and he wasn’t about to spill his guts to anyone. Not even his overprotective big sister.

“Don’t even bring that little trollop into it, Andrew. It’s not what you think. They’re not together. They never were, really.” She sighed.

He was successful, in his own way. He’d made a name for himself in computer coding and encryption programing. And nothing was going to make him turn back into his former self.

Nothing. Especially not that town.

Christmas and Thanksgiving were fine. There was no pressure and he could come and go as he pleased as long as he rang. So he chose not to go at all and just dropped them a holiday message when he knew the family would be too busy to answer the phone.

Genie and Sara came a few weeks a year and he admittedly loved spending time with them but he never returned the favor. He never went home. Not since he’d left for college nine years ago.

“Andrew. Drew, I didn’t mean to—” Sara desperately tried to backpedal but it was too late.

Usually she backed off long before now.

Pinching the bridge of his nose, Andrew let out a harsh breath. “It’s fine. Just don’t go there, okay? Why is this so important to you, Sara?”

“I can’t tell you but I really need you to be home this weekend. Please, for me and Steve?”

So they were on to the emotional blackmail part of the conversation.

“We need you here for this,” she pressed.

“Enough. I’ll come if I can but if Angela comes near me then—”

He felt guilty enough for not wanting to go to his dad’s sixtieth birthday, even though he wasn’t close with his parents. But his mother had sounded so tired the last time she’d called him and that played on his mind.

“Then I’ll sic Mom on her. I’ll tell her the reason the nice Robinson couple down the street had a ‘difference of opinion’. Mom loves Mrs Robinson and will be out for blood if she finds out the family slut was the one to break up a happy home.”

“Come on, it couldn’t have been that happy—” he started.

He’d seen too many friends go through hell after their other halves had cheated on them. Some had even been the cheater but most of the time there had always been underlying problems in the relationship. Either that or the cheater was just a rat bastard—male and female alike.

In his mind, there was no excuse for cheating.

If you wanted someone else enough to risk what you had at home then you needed to be honest. Make a decision and have enough respect for the person you’re with not to betray them.

But then he’d never actually been in a relationship, so what did he know? Maybe it was more complicated than that. Andrew picked at a piece of lint on his trouser leg as he thought about his love life.

There had been a few dates here and there over the years but no one special. There was no risk of being hurt if a person didn’t care to begin with. That’s what he told himself anyway.

“No, really, they were happy,” Sara assured him. “Angela got him drunk and slipped him something. I heard her talking about it with the bimbo twins. The man was so distraught after it wore off that he packed up and left the city. He was a good guy.”

“Holy shit. That’s date rape, Sara,” Andrew was at a loss as to what else to say.

He fiddled with his glasses, bouncing the frames on his nose. The forth bounce had him snatching his hand down. He’d worked too hard for old habits to resurface now.

“I know. I’m trying to track him down and see if he wants to press charges. If he does, then I’ll report to the police as a witness to a confession. I taped the bitch on my phone too but I don’t want to do anything without speaking to Mr Robinson first.” Sara seemed outraged that someone would do such a thing. In fact, his sister sounded disgusted but determined nonetheless.

“Again I repeat—holy shit. Are you any closer to finding him yet?”

“No. I can’t find him but I’m going to keep trying.” Sara sighed.

Andrew realized just how much this was affecting his big sister.

“Email me whatever information you have on him. Friends, family, where he used to work, everything, and I’ll see if I can help.” Hell, he could probably track the man down simply from his name alone but his sister didn’t need to know that. Andrew just didn’t want to answer the questions that would follow if he did. After all, his family still thought he worked as an IT tech for some admin company. And that was the way he wanted it to stay for now.

In reality, he worked as a freelance hacker or rather a reformed hacker who now only hacked for the ‘good’ guys. At least that’s what he told himself. There was some shady information he came across on the job sometimes but it wasn’t his place to judge the CIA’s actions.

Just because he wasn’t the moral police didn’t mean he wasn’t storing information away in case there came a time he could do something about it. Some of the stuff gave him nightmares. Well, more nightmares. He had feelers out searching for anyone who was high enough up the food chain to take action but wasn’t corrupt as well.

It was an unsurprisingly hard task.

“You can help? But I thought you only fixed computers and stuff.” She obviously realized how disbelieving she sounded and Andrew almost smiled when his sister started backpedaling again.

“I… I mean great. Any help you could give me would be awesome,” Sara gushed before pausing to see if he’d take the olive branch.

“No problem. I think you’d be surprised at what I can do with my computer, sis,” he teased, for once enjoying the secret that was his life. Sara wasn’t stupid by any means, so he would probably have an inquisition in his near future.

“Okay, little brother. Thank you but don’t think you’re getting away with being evasive for long. Love you.”

With that, she hung up leaving Andrew smiling. At least until he remembered why she’d called in the first place.

The severity of the situation dawned on him.

He had to go home.

The noise of his phone handset smashing against the wall wasn’t nearly as satisfying as he wanted it to be.

Share what you thought about Out of CTRL PRINT and earn reward points.