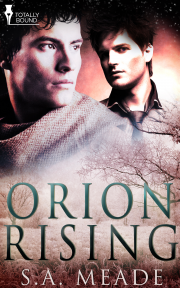 Michael and Paul fight to survive in a land frozen by endless winter. Will the ice between them thaw once and for all?

Michael Wright has given up thinking he's anything more than a number-cruncher. When he's summoned to verify the outcome of renowned meteorologist, Paul Clarkson's latest research Michael is happy to escape the drudgery of a grey cubicle at the Met Office.

At Station 17 he finds himself working side by side with a brilliant scientist and charismatic man who stirs a lot more than respect. The attraction is mutual but, after a few snatched hours of passion, internal politics and a vengeful adversary tear them apart.

When Michael returns to Station 17 two years later he discovers that the world isn't the only thing that's changed. Paul is forbiddingly distant and the fire that once burned between them has turned to ice. The violence of deadly storm reignites their relationship - but will the disastrous aftermath of another destroy their love once and for all?

The transport’s engine wheezed and choked like an old man while it idled at the edge of the track. "Here you are." The driver lowered his scarf for a moment and offered me a thin smile full of broken and yellowed teeth. "You’d best hurry—there’s rain on the way." The sky beyond the compound’s earthen walls was a dim, glowering green—it wasn’t a shower I wanted to be caught out in. "Thanks, mate." I shouldered my bag and pressed a coin into his hand. "Looks a bit quiet out there." "Yeah." I nodded to the driver and walked towards the open gate, where someone was waiting. The gatekeeper glanced at the slowly boiling clouds and shifted impatiently from one foot to the other. I hurried through, waving my pass in his direction. "You need to go that way." He pointed towards a long, low building, half buried in the stony soil. Brown moss softened the grooves in the corrugated tin roof and yellow vines obscured the stone walls. Station Seventeen certainly didn’t look half as important as it was supposed to be. I didn’t have time to wonder why I’d been summoned there, why I’d drawn the winning lottery ticket. Most of my Met Office colleagues had beenfrankly envious when they’d heard of my new assignment. I certainly wasn’t going to argue with the posting. The doorway was a shallow depression in the dead plain. I pressed the buzzer, held my pass up to the camera’s tiny eye and waited. The wind rose, bringing with it the odour of rain—a thick, chemical smell—and the promise of second-degree burns to anyone hapless enough to be caught in the downpour. People hurried across the compound, most of them looking up at the gathering clouds. A grey veil obscured the plain away to the west, edging closer. I pressed the buzzer again when the wind quickened, kicking at the dust. A warning klaxon shattered the waiting silence. The door slid back with a fierce whoosh and clanged shut behind me. The first drops of rain hissed on the stones. It took a moment or two to adjust to the charcoal dimness of the foyer. The brightest thing was the red pinpoint of light from the surveillance camera. I stared the blank lens down and waited as the Station’s ID system scanned me. "Welcome, Michael Wright." The cool, mechanical voice accompanied the opening of the main door. Beyond it, a woman in overalls stood in a shadowed corridor, clutching a clipboard. "Dr Wright?" It was tempting to remind her that the computer had identified me as such. It had been a long journey and I wanted to wash the invisible, cloying smudge of broken air from my skin. "Yes." "Welcome to Station Seventeen." She held out her hand. Her fingers were cold as they squeezed mine. "Thank you." "I’ll show you to your quarters. You’ll probably want to sort yourself out after your trip." Her wrinkled nose betrayed her oblique suggestion. I hoped the shower was a decent one. She led me into a narrow side corridor. "All the sleeping quarters are down here. If you keep walking and turn left, you’ll reach the canteen. There’s food available all day. It’s not great but it does the job, you know?" The smell of something slightly overcooked drifted along the corridor, maybe some stew left too long in the pot. "Yeah, I know." "Here we are." She glanced down at her clipboard, then at the number on the door. "It’s better than you’re thinking. Go ahead and swipe your pass." I did. The door slid back with an arthritic ‘thunk’- and a rush of warm, neutral air swirled around me. "Not bad, huh?" The woman grinned. "No, not at all." After dossing down in roadhouses for two weeks, I found the room clean and well-lit, the wall lights turned to a midsummer afternoon setting. The rain hammered on the roof and it didn’t matter because I was safe and warm. I had a proper room all to myself, not a small, grey rabbit hutch in one of the Metropolitan Polydomes. The only thing it was missing was a window, but given what I’d seen of the dead landscape, I didn’t think I’d miss the view much. "I’ll leave you to get settled. Dr Clarkson will meet you in an hour. I’ll be back to take you to his office." She offered me a bright smile. "I hope you’ll like it here." There was something in her eyes—something like speculation and hope. The only hope I had was that she wouldn’t be too disappointed.
Buy Now

The ups and downs these two go through are heart wrenching...I especially loved the message of hope it left me with, and not just the hope of technology enabling us to survive. What was more important...

This is such an interesting story with a fascinating portrait of a dystopian future, ravaged by environmental damage, global warming, and a new ice age...I enjoyed this story quite a lot. Meade does...

Share what you thought about Orion Rising and earn reward points.

Thanksgiving was always my favorite holiday. It always gave me a bit of a kick to walk into the local supermarket and see the special shelves set up, all laden with everything a person could need for Thanksgiving Dinner. It meant that the long, dreadful Arizona summer was over and that the good weather was on the way—the cool, sunny days and the wonderfully chilly nights. The locals would be digging out their sweaters while the Snowbirds—winter residents from chillier parts of the US, would be wandering aimlessly down the aisles, trying to get the measure of an unfamiliar store.