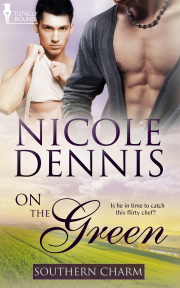 On the Green PRINT

Book 3 in the Southern Charm series

Can a flashy sous chef and a hard-working landscaper go beyond their pasts and find one another?

Homeless as a teen, Malcolm Bissette has found a new life at the Southern Charm. Flamboyant, he often changes his hair color on a whim. At sixteen, he crushed hard on the landscaper Reece Simpson.

Now all grown up, Malcom still has a crush on Reece, but there appears to be no reciprocation from him. Malcolm watches him at work every day from the kitchen, but lets the crush disappear. He vows to forget the man—that is, until Reece changes the entire game.

Waiting for years to get his hands on the vast overgrowth around the Charm, Reece Simpson dives into the project with enthusiasm. Preferring plants to people, he sticks to just brief moments with men. There is one man he would consider staying beyond a moment with, though—the flashy, colourful sous chef at the Southern Delights. Realizing his feelings, Reece is knocked off his feet by a wave of emotions. Is he in time to catch this flirty chef?

What would it be like to have Mal in bed? Would it make the summer afternoons even steamier? Is there a chance for love for both of them? Could they entertain the idea of a life together like their friends?

Standing on one of the higher hills overlooking the brand new luxury golf course he was creating with a pro-golfer, Reece Simpson tugged on his ball-cap and unfurled the plans to check on the situation for hole eleven and the three damn bunkers the golfer insisted on creating around the bends. After tugging out the walkie-talkie from his belt, Reece hit the button to connect to the supervisor on site.

“Sal, extend the damn bunker another two feet to the right and four feet deep. Make sure to get those river birch and saw-tooth oak grouped tight together. I want them growing throughout the right turn and to hide the bunker and hill to the green.”

“No problem. Do you want the cypress to go on the left?”

“In a row, I want them ten feet from the edge of the green.”

Reece hooked the radio on his belt. He checked his phone, which had been suspiciously quiet throughout his stay here. He wasn’t sure if it was his location or the service. Either way, he needed to get in touch with the office.

“Afternoon, Reece. How is our top notch course coming along?”

Hearing the owner of the hotel and golf course calling to him, Reece rolled the plans back then clenched his fist as he faced the man. “There are things we need to discuss. You need to get a handle on your damn golf pro.”

“Why? I thought he was helping you.”

“He’s hampering what little progress I’ve made,” Reece said and shoved a hand through his hair. “If your damn golfer stopped changing his mind, things would be further along. Right now, he’s made twelve changes since the original plans were finished and approved. I cut him off this morning when he pointed out additional alterations. They’re not in the schedule.”

“He’s a player and designer and sees things in a different way. Could we incorporate his additions?”

“Not if you want to open the course in September. I’m lengthening the bunker on eleven, which means I have to move the trees. Every change requires multiple issues and alterations he doesn’t see. I’m sorry, but I cut it off.”

“Understandable. Are we on target for the Labor Day opening?”

“The trees won’t be full size for a couple of years, but you’ll have the look you want for the course and hotel grounds. We got the shipment of Italian cypresses you want to line the entrance and they’ll go in today. We’ll lay the grass next week on the remaining holes. They’ll need continuous water until they’re secure. A company will come in and trim everything to length the weekend before opening day if we stay on schedule.”

“Good. Good. I love those slender cypresses and it’ll incorporate nicely with the Tuscan feeling of the hotel’s structure.”

“Hmm. They are a good match to the hotel. I added in the scarlet maples you requested. They’ll give you a bright red colour to contrast with the golden Norway maples.”

“Excellent. Shall we move to the gardens?”

Reece hit the button on his walkie-talkie twice in rapid succession to alert Sal that he was moving to the gardens. He got a triple beep in acknowledgment. He followed the rotund man to the extraordinary Tuscan-inspired lawn. To stay with the inspiration, Reece had chosen multiple plants found within Tuscany and able to grow in the climate. It had ended up being one of his favorite designs.

“What are we doing around here?”

“All of the colours will be the earth-tone and natural ones in shades of olive, moss, tangerine mist, sunset, peach, terracotta and lavender. The stones are native to Georgia along with travertine and decomposed granite. We’re keeping the same palette.” Reece directed their attention to the far end. “We’ll create several wall and free-standing fountains for the water features. The extended patio will be finished in the travertine and ionic columns. My designer will choose old-fashioned iron hinges and armillary works along with typical statues.” Reece pointed out the areas. “In the opposite corners, you’re going to have two fire features along with outdoor seating in coordinating woods and fabrics. This is one of my favorite designs, top of my personal list.”

“Good to know, it means everyone else will enjoy it. What about plants?”

“I’m adding bay trees, lemon and olive trees in smaller containers, and old knobby grape vines will follow the entire patio and arches, and will weave around all the beams. The planters will have a variety of thyme, rosemary, lavender and multiple varieties of sage. It’ll be an eclectic touch your kitchens can use for their dishes.” Moving through the area, he gestured to the other forms. “Those will be stone planters to create the feeling of an old garden. When it’s done, you’ll have walkways, comforting benches and tables to invite folks.”

“Damn, this sounds perfect.” The man pounded a hand on Reece’s back, forcing him to take a balancing step.

“You’re going above and beyond what I asked for and I knew hiring out of state would do wonders. You came highly recommended, son, and I’ll pass on the praises to others.”

“Appreciate it, sir. It’s been a pleasure working here. You hired a good horticulture staff to take care of the entire grounds. I can leave them in charge when we have the plants situated in the ground. You have my guarantee if anything dies within six months of planting, I’ll send someone to investigate for the problems and replant or replace.”

“Understand. I understand and gave a copy to my head grounds keeper to sign and keep for his records.”

“Good to know. I should do the same with all clients.”

“Happy to see progress. Are you staying on until all is planted?”

“I can’t. I need to return to a project in Louisiana and another in Mississippi before I head back to Florida. Sal and Clayton are top-notch. They’ll handle the final builds and plantings. Again, there can be no more changes from the golfer, no matter how much he whines and complains.”

The rotund man laughed and held a hand up. “I promise, Reece, no more changes. I’ll have a word with him to calm down and back off. Will I see you back for the opening?”

“If I’m able, it would be a pleasure to attend the opening.”

“Are you signed up for a tee time?”

Far too happy to have his hands in the dirt, Reece shook his head with a smile. As a child, it had been safer for him to be out in the garden, attending to the plants. He didn’t want to be around his father’s drinking and his mother’s babying of his younger siblings. He held back a shudder of the unbidden memory. “I prefer to dig in the dirt than hit a white ball across the grass. I’m sorry, I never had an interest in the game. I hope you’ll enjoy the finished course.”

“Not everyone likes the game. You either love it or hate it.”

Share what you thought about On the Green PRINT and earn reward points.