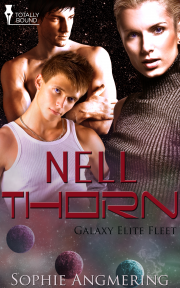 Who ever said Rim Lords were easy?

Mouthy, brassy blonde bombshell Helena Thorn is the oldest daughter of one of the most established and influential Galaxy Elite Fleet dynasties. Ambitious, focused, she is fast tracking herself to Sector Command by running covert missions for a clandestine group within the Fleet. Her latest orders involve locating a sex slave on the planet of Egalita Prime, buying him, and then relocating him without anyone finding out about what she has done.

Except the sex slave turns out to be a powerful Rim Lord, who has been drugged and betrayed as part of a faraway coup.

Reader Advisory: This book contains scenes of M/M intimacy and F/M/M ménage sex. This book can be read as a standalone title but may be best appreciated read in sequence as part of a series.

The words were spoken with cool authority, the voice female, and there was no mistaking that she was talking about him. He was lying down because those bastard slavers had beaten him so badly he couldn’t get up. Woodson Rowe shut his eyes again with a groan. The right side of his face felt as if it were on fire.

The crisp click of expensive footwear marching around the other wretched souls up for auction with him was impossible to ignore. This was a slave auction, being held on the poor excuse for a world that was called Egalita Prime. The name alone was surely a joke. There was nothing egalitarian about this particular Inner Galaxy World. The only thing that was universally accepted was money, and plenty of it. You could buy anything here, it would seem. Even a Rim Lord, who had been drugged and betrayed as part of a faraway coup, was available for purchase.

“Indeed.” Her voice was cool, caustic; her tone suggested she was unused to having her wishes questioned. “I can certainly see he is battered about. No doubt knocked unconscious by you or maybe one of your thugs. What happened to make you beat him senseless?” The voice moved closer as she walked towards him. “Was he disobedient?”

“He is a violent psychopath, not at all what you could possibly want. He flattened one of my guards trying to escape.”

Madam was apparently ignoring the slaver’s arguments, the sound of her footsteps finally coming to a stop beside him.

Rowe cracked open one painful eye and was met with the sight of a pixie-like face, topped with a shock of bleached, brassy blonde hair, cut and styled into a sophisticated crop, looking down at him. Her blue eyes were surrounded by lashes so long it looked like moon-spider legs had been stuck to her lids, and her wide, generous mouth was edged with the shiniest, reddest lips he had ever seen. Whoever she was, she was a cosmetic merchandiser’s dream. Her complexion, whilst flawless, looked completely artificial.

The slaver started to splutter an almost incoherent protest at her choice.

“Name a price, or I will be telling the Governor later of your reluctance to trade. He is always particularly keen to welcome representatives of the fleet to his protectorate, and he will no doubt take your actions as a personal affront.”

Refusing to trade on Egalita Prime was a capital crime.

“Fleet Captain Helena Thorn, if you please. So, have you a price?”

Just when he’d thought his luck could not get any worse, it seemed to dip even further. The slaver’s female customer was a Galaxy Elite Fleet Officer. These particular representatives of the Inner Galaxy Worlds were the sworn enemy of any Rim inhabitant—the two regions of space had been at loggerheads for almost a thousand years. The Fleet was responsible for enforcing the universal rule of law throughout the IGW and on the border with Rim space.

“Can I ask you what you intend to use him for?” The slaver retreated into icy civility in response to the Fleet Captain’s threats.

“Well, for sex, of course.” Her voice implied it should have been obvious.

“But, Captain Thorn, he is a violent and unpredictable man!”

“What can I say? I have unusual tastes.”

Share what you thought about Nell Thorn and earn reward points.

Other books in the Galaxy Elite Fleet seriesView Series Page