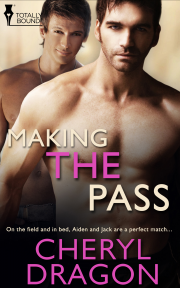 On the field and in bed, Aiden and Jack are a perfect match. But when reality and pride interfere, will they be able to become a team.

Aiden and Jack are both hot, gay men and play weekend football for the Griffons. Their similarities end there. Jack is blue collar and sees both the attraction to Aiden and the divide between them. His career is delivering packages to fancy offices, including the one where Aiden works. On the field, they spark and win, but it takes a friend's nudging before Jack turns the mutual macho posturing to passionate sex.

The physical connection between Aiden and Jack is easy, but they'll need extra practice for the relationship part. Aiden tries to fit in with Jack's friends, but when Aiden invites Jack to an office party, Jack refuses. Thankfully, the rift won't stop the game from progressing, and neither man is a quitter!

Publisher's Note: This story has been previously released as part of the Out of Bounds anthology by Totally Bound Publishing.

Aiden Brewer kept his eye on the ball and the field. The last summer wind blew over his arms as the evening brought cooler temps to the New England football field. It was just a practice so the stands were empty and after he’d bruised his ribs in the last game, Aiden wasn’t pushing too hard. Looking over at Jack Allman eased the pain with a jolt of lust. A field full of hot men and Aiden had to want the one who showed no real interest. They were friends but not really that close.

It made Aiden nuts. Especially when he had to target Jack with the ball. The wide receiver had good hands and fast feet. He also had sexy boy-next-door looks on an athletically muscled body with buzzed reddish brown hair. His chest hair tempted Aiden even more. Those deep brown eyes of his never missed a thing in the locker room.

Aiden had to lead and shook off the fantasy of tackling Jack naked. Facing the same direction, Jack squatted a few feet away. Aiden was always aware of where Jack was since passing the football to Jack was Aiden’s job. As he reached for the ball, Aiden swore Jack was looking at him. .

Ignoring Jack, Aiden took off and ran the play. He found Jack down the field and hurled the ball with precision. His ribs screamed and Aiden held his side. His teammates didn’t tackle him and Paul came over. Aiden watched Jack’s strong body power down the field and make a touchdown. His ass looked so good in that uniform, Aiden wondered if he’d ever get over the friend who seemed oblivious.

"Just the ribs. Damn, still sore." He tried to shake it off.

"You’re thirty. You’re not going to bounce back like those wild twenties anymore." Paul patted him on the back.

"I just didn’t want to sit it out." Aiden shrugged.

"Why not? You won’t turn rusty in a week." Despite Paul being a good friend, Aiden didn’t want to hear it.

Aiden nodded to the other end of the field. "Jack as usual. Being a dick."

"He said something?" Paul asked.

"In the locker room. He’s two years older but no sympathy." Aiden knew Jack’s job was more physical. The advantage of having more muscle was all with Jack, at least for muscle and power. The perfect throws were Aiden. The engineer had to hit his mark.

"You should just freak him out. Kiss him or something. I bet that’d solve a lot of problems," Paul teased.

Aiden shook his head. "I’m not being the butt of more of his jokes. The guy has it in for me."

"Not how you think," Paul said.

That train of thought would only get Aiden into trouble. Jack could take the teasing if Aiden chose to dish it back.

The assistant coach blew his whistle and the team headed in. "Good job. Hit the showers. Aiden, don’t push it next practice. Rest the ribs so you’re good for the game. Sitting out one won’t kill you."

"Sure." Aiden pulled off his helmet.

"But hit the gym so you stay loose." Jack grinned as they walked towards the showers.

"You’re the coach now too? Why don’t you just pass yourself the ball?" Aiden shot back.

The team laughed and headed for the showers. Aiden knew his banter with Jack was expected. The duo always delivered. He found Jack and Jack somehow managed to outrun the tight end and nab the pass. They were connected and the team counted on them. Plenty of guys gave them crap about being a couple. Practising at home and on the side—Aiden wished!

He was last in the steam-filled college locker room. The facilities were updated and well-maintained. He sat on the extra-wide bench down the middle of the rows of lockers. There was no rush. As annoying as Jack could be, Aiden hated leaving the games and practices.

Paul helped him get the pads off to spare his ribs. When the material cleared his head, Aiden caught Jack watching. The man was nuts! Running his mouth and then acting jealous. Paul was a friend and had eyes for that kicker on the Griffins’ rival team. Aiden hated to turn the tables of teasing on Paul, but it’d work.

Share what you thought about Making the Pass and earn reward points.