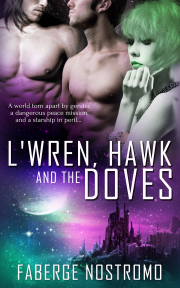 L'Wren, Hawk and the Doves

A world torn apart by gender, a dangerous peace mission, a starship in peril… Can anybody’s sexuality be certain under pressure?

If your emotions could be felt by another, if the desires you kept hidden were revealed and reflected back on you, would you—could you—deny and control those needs?

And if sexuality and gender aren’t what they seem, does it change who you are?

The mission of the starship Sulaco, its captain Saker Hawkings and first mate L’Wren James, is to deliver the mysterious alien empaths Anchises and Cytheria to the planet Ourania, a world at war with itself.

Where sex is power and gender decides everything, the Dove peace negotiators must interact strictly male to male and female to female with the warring factions to broker a lasting peace.

But can they keep hidden the secret loss that drives them and still control their own empathic responses to the desires and needs of others—the desires that they themselves feed?

And while Hawk and L’Wren struggle to save their ship and face up to the challenges of duty, passion and their own sexuality, with one Dove dangerously injured and the other missing in action, only the truth about Anchises the man and Cytheria the woman can save one of them—but which is which?

Reader Advisory: This book contains a short scene involving a young man of ambiguous age being used in sexual service.

In the softly lit seclusion of the cabin, the comm alert buzzed like a wasp caught in a fan. Captain Saker Hawkings stirred from a deep sleep. He rolled over and punched the button. The pulse of the plasma nacelles lowered in intensity from a high-pitched whine to a background hum as the Federation starship Sulaco dropped from hyperdrive into normal space and began its orbital approach to Earth Station Halo Five. Through the porthole, Hawkings saw the elongated blue streams of the stars shrink to single points of white. He turned back to face the cabin and his eyes adjusted to the dim light.

The voice of the chief engineer crackled into the silence.

“Chief here, sir. We’ve dropped from hyperdrive early as there’s a burst of solar flare activity from the sun. Proceeding on impulse drive with two hours to docking. Standard orbital approach engaged. Recorded message from Fleet Control waiting for you on your comm,” the chief announced in his lilting Scottish brogue.

“Acknowledged, Chief. Okay, keep me briefed on the flare situation. Orbital protocols apply meanwhile. I’ll be on the bridge for briefing at 0800. Alert me if anything new comes through. Hawkings out,” said Hawk, his voice husky with the half-awake growl of someone roused too early.

The comm screen flickered off, leaving an amber indicator that blinked slowly. Hawkings lay back and sighed. “I need to check, but I’m guessing they’ve finally decided to let us know what this mission is about.”

“Sure. Mission protocol in…what—one hour twenty?” said the petite, green-skinned woman curled up tightly against him in his bed as she trailed a fingertip along his shoulder and down his arm.

“Maybe one ten,” he said. He rolled over and smiled into the deepest green eyes this side of the moons of Aldebaran.

“One fifteen, my final offer. Take it or leave it, Captain,” she said, emphasizing the last word.

“Is this a mutiny, Mister Mate?” he said. He tried to affect a scowl but failed, her touch doing it to him again.

“It might be, unless you can do something to suppress the stirrings below decks,” she said. Her green eyes twinkled like the twin stars of Trapiche, her home planet, as Hawk laughed.

“Hold that thought, Mister James. Let’s find out what this mission is all about then I’ll deal with you, you scurvy space-rat.”

L’Wren James, Ship’s Mate First Class, laughed and punched the captain—her Hawk—in the arm with one hand and stroked the other down his back. His skin was warm to her touch. It was smooth, with the outline of firm muscles gently defined in the soft shadows, and she wanted to touch it a lot more before their agreed ‘mission protocol’ kicked in. Once that happened, their relationship would be totally professional and platonic—and would stay that way until the mission was over. She knew this night was their last chance for…well, who knew how long, to be together in the way they wanted. And she was determined to make the most of every waking moment.

Hawk touched the illuminated comm indicator. A one-tenth life-size 3D hologram of a gray-haired, uniformed man buzzed into life above the console.

“Captain Hawkings, this is Admiral Landseer at Halo One. You are receiving this communication as you are now en route to dock at Halo Five. For a number of reasons, this was the only directive we were able to share with you prior to embarkation. As you are no doubt aware, the situation on the planet Ourania has worsened in the last few days. The strategic importance of resolving the conflict on the planet cannot be overstated. It is absolutely essential that a safe subspace lane is maintained through the Ouranian system. While the gender conflict there threatens complete destabilization of the planet, the risk to fleet operations is enormous. The balance of the peace talks is at an extremely delicate stage and, quite frankly, beyond the abilities of our current negotiating team to bring to a satisfactory conclusion.” The holographic figure paused and leaned forward. 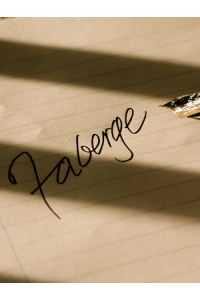 Lost in space, yet still boldly going, Faberge Nostromo returned from the forbidden planet a long, long time ago to live a quiet life in a small town called London.

The minimal research she'd done led her to the conclusion that her identity would best be protected if she masqueraded as a business analyst by day and a writer and musician by night and at weekends.

Available for musical soirees at the drop of a hat, she writes steamy SF romances while she waits for a set of replacement dilythium crystals for the broken warp core on her ship.

Share what you thought about L'Wren, Hawk and the Doves and earn reward points.