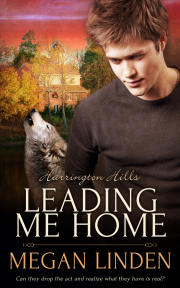 Book 1 in the Harrington Hills series

Pretending to date the guy he has a crush on? Kevin’s sure he’s heading for a disaster. A broken heart, at least.

Kevin has been a lone wolf almost his entire life and he’s comfortable with that. Now that he no longer works for the guy he hated, Kevin has only one problem—his crush on his neighbor and best friend.

Taylor is the Alpha’s Son, the heir to the Harrington Pack. He left his hometown and moved to San Francisco as a rite of passage, but it was always temporary, since his place is in Harrington Hills with his pack. Now Taylor is heading back home for a wedding and since his mother is threatening to set him up if he comes alone, he needs a date. Asking Kevin to be his pretend boyfriend sounds like a perfect solution.

What happens when they arrive in Harrington Hills and learn to see each other in a different light? With their relationship changing, can they drop the act and realize that what they have is real?

Two weeks into his unemployment, Kevin was yet to regret being fired. His sleep schedule was finally somewhat stable and he enjoyed being at home every night, where his main task was to catch up on all the shows he’d missed when he was tending the bar.

He was about to reach for the last slice of leftover pizza when he heard knocking on the door. The familiar signal—two quick knocks followed by two more after a short pause—meant Kevin already knew who was outside.

“Everything’s all right?” he asked as he opened the door and let Taylor in. They’d lived next to each other for over a year and a half now, and they regularly dropped by each other’s places at various hours of the day, but five to midnight was pretty late, even for them. “Aren’t you supposed to be buried under the deadlines?”

“Two projects down, one to go.” Taylor flopped down onto the couch and grabbed the last slice of pizza. “It’s cold,” he said, scrunching his nose, but that didn’t stop him from taking a bite.

“No one forces you to eat it.” Kevin rolled his eyes and sat down in his place on the couch. “What’s up? Deadline jitters?” He’d witnessed it happen countless of times by now. There was always a point when the stress of running time hinged on the threshold of a nervous breakdown and Taylor’s manic energy had to get out somehow. The fastest way to deal with it would be to change and run as a wolf, but they were living in the middle of a city not really known for its wolf population, so that option was rarely on the table.

“I got a call from home.” Taylor burrowed deeper into the couch cushions and Kevin was sure that even if he weren’t a werewolf, he would be able to sense Taylor’s unease. “Mom A has informed me that if I come to the wedding alone, she will stage an intervention—in the form of presenting me to all eligible bachelors from our pack.”

Kevin told himself that the sudden roll in his stomach came from too much pizza and a reaction to Taylor’s stress. It was most certainly not from anything even remotely close to jealousy at the thought of a bunch of men fighting for Taylor’s attention. He put his feet on the coffee table slowly. “Isn’t she going to be too busy with the wedding?”

Taylor finished chewing another bite before speaking again. “She’ll never be too busy to try to bully me into dating.”

“Lovely,” Kevin muttered. He knew she was both Taylor’s mom and his pack’s Alpha, but there should be some limits.

“I need to find someone to go with me.” Taylor stared at the ceiling. “Who do we know that could do this?”

“Most of my friends are taken, damn it,” Taylor continued as if he hadn’t heard him and Kevin wondered if there was even any point in trying to reason with the crazy person his best friend obviously was.

“You don’t need a date,” he tried one more time.

This novella has it all - friendship, romance, it has some hot scenes without being gratuitous, and it has definitely left me wanting more. Absolutely adored this book and I'm looking forward to...

This is a quick read with some fun, lighthearted moments but, there’s some intensity here as well. Kevin’s lone wolf had to work through his issues and Taylor had to recognize what his wolf knew...

Share what you thought about Leading Me Home and earn reward points.

Other books in the Harrington Hills seriesView Series Page