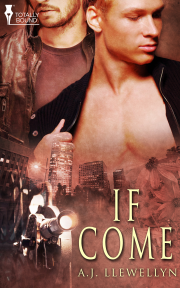 In If Come, AJ Llewellyn deals with the ancient deadly sin of acedia.

It was once considered the 'noonday demon'—a melancholia that is brought about by repetitive work. Writing, marriage and monkhood were the three main occupations said to induce it.

Zam Carmarthen is a mildly successful Hollywood screenwriter struggling with a debilitating depression that prevents him from completing anything he starts. When he lands an 'If Come' deal with a major Hollywood producer, he's finally forced to focus on his work and not give into the strange malaise gripping him. In order to ever move ahead in the movie business, he must complete the pilot episode of his proposed TV series, Angel Inn. If his producer is able to sell the series, Zam will be a very rich man. Everything he has worked for can be his.

Paralysed by his depression, he finds unusual solace in the form of his arch nemesis, Dominic Glass—a surgeon turned super successful screenwriter…and the man who rewrote Zam's hit screenplay for his own glory.

Can Zam overcome the depression Dominic calls acedia, which threatens to derail his whole life? Can he move on from his long time sex buddy Jason? And what about these new feelings he has for Dominic in spite of their rocky history? Will Zam get it together…or will Dominic once again walk away with all the credit for something Zam created?

Reader Advisory: This story has been previously released as part of the Sins of Winter anthology by Total-E-Bound

Zam Carmarthen entered the lobby of Longshore Films, immediately enchanted by the huge black and white photos on the wall of long-ago shipping days. He took in the close-up images of handsome, rugged stevedores unloading massive pallets on weathered-looking docks. He felt the strong pull of attraction to a couple of the men, shirtsleeves rolled high on their arms. He studied them as he adjusted his messenger bag from one shoulder to the other. Man, I gotta be hard-up, fantasising about men who’ve probably been dead for years... He tore his gaze from the images on the walls and sauntered over to the row of youthful-looking assistants manning a shiny bank of desks against the far wall. They all wore black and had this season’s de rigueur hairstyle. Gamine. Even for the men. He felt hopelessly unfashionable with his dark, curly hair, well-worn jeans, vintage plaid shirt and the suit jacket that had seemed like such a groovy idea at the thrift store. Nevertheless, he swallowed over the lump in his throat and pressed forwards. Business must have been slow or else the three assistants just didn’t give a toss. Each held a portable device in their hands. One man was playing Bookworm, the other was playing Diner Dash. The third and only female assistant, God help them all, was rapidly exchanging text messages with somebody. Zam jumped in between her manic rounds with dangerously hyperactive thumbs and kept his tone breezy. "Good morning. I’m Zam Carmarthen, in to see Jack Kilgrove." She ignored him, fired off a quick text response and then looked up at him, faint annoyance etched into her features. "Sorry. What was that?" He repeated himself. "My appointment’s at ten," he added. It was now five after. She glanced at a huge nautical clock on the wall and seemed about to gripe at him for being late. Zam sensed an immediate problem. He glanced down at the assistant’s desk. He had a horrible feeling Jack Kilgrove wasn’t even here. He had heard every excuse for executives not showing up to meetings, but this usually happened after lunch, not at ten a.m.—the Hollywood equivalent of the crack of dawn. Executives cancelling meetings happened to him a lot more than he cared to admit to his friends and family. Being a struggling screenwriter in Hollywood sucked. After turning out a screenplay that had become a mildly successful comedy, he’d been ecstatic to find he was inside the business of Hollywood. It got him meetings, a few extra Facebook friends...but not much more. He was sinking into a depression. Fast. The assistant flicked another glance at the wall clock. He could almost read her mind. She couldn’t use lunch as an excuse. "I don’t have you down here," she said, finally. "Yes, you do. You called me at eight-fifteen this morning. You’re Sophia, aren’t you?" She blinked a few times, as if trying to remember. "Ah, um...yes." Her head tilted at an odd angle. "Wait. I called you?" She seemed reluctant to put her cell phone down on her desk. God forbid she should miss a text message. She swivelled her chair towards an obsolete desktop computer. She pecked away with her free hand at the keyboard. Without turning to look at him she said, "I didn’t call you. I called Cam Cameron." "Zam Carmarthen. That’s me." "Are you sure?" She looked flustered. For the first time, her cohorts glanced up, both men looking appalled. "Yeah, I’m quite sure. I’ve had a few decades to absorb the shock of having such an unusual name." "Zam Carmarthen." "Yes, that’s me. You asked me to come in at ten. And here I am." "Wait," she said, using both hands to fan herself as her cell phone rang. "I remember now." She looked so pleased with herself. How lucky for both of us. He smiled, willing himself to remain in the zone. Pitching had been the last thing he’d expected as a writer. Nobody had told him that being a writer in Hollywood involved acting. It took a lot of rehearsal to perform a story pitch. He’d timed it to the required eight minutes. If he began to fret or cave into self-pity he’d forget his rhythm. Man, this is so not how I thought it would be once I sold a screenplay.
Buy Now

A.J. Llewellyn give us a look into the world of screen writing and the need to protect yourself and your work...Filled with emotion and hot scenes, If Come will rise to the top of your list of favorite...

Share what you thought about If Come and earn reward points.