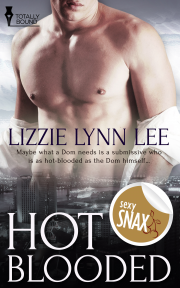 Adam longs for a Dominant—and not just any Dominant. He has his eyes on Jacques ‘Jake’ d’Allemagne, a man as sexy as sin who has made Adam’s blood boil ever since he first laid eyes on him. As the owner of a fabled club in the French Quarter, Jake is a hot catch. Many compete for his affection and a night in his bed. When Adam finds out Jake’s lover has been cheating on him behind his back, Adam sets his mind to seduce him. Maybe what a Dom needs is a submissive who can love him unconditionally. A sub that is as hot-blooded as the Dom himself…

Reader Advisory: This book contains scenes of kidnap, violence, dubious consent, M/M/M ménage and the use of Shibari bondage.

He burned Adam like no other. From the moment Jake set his eyes on him the flirtation had started, and by the time he decided to take Adam into the coat closet of his club, Adam felt as if someone had set him on fire.

Jacques ‘Jake’ d’Allemagne was the owner of Club Clover—a man so sexy he should be branded a sin. But Jake was so much more than just a walking, talking, modern-day Adonis. The man was hypnotic—from the way he carried himself, haughty and proud with an air of dominance that oozed from his every pore, and the way he spoke in his deep, French-accented dulcet tones—everything about Jake sent shivers down his spine. Adam Jones had longed for him ever since he’d stumbled into the club a few months back.

Each time Adam visited Club Clover, he tried to attract Jake’s attention, but Jake hadn’t responded until now. Pure luck? Maybe. Adam liked to think he was an opportunist. A close friend of his had confided that Jake was in a rocky relationship at the moment, and Adam saw this as his chance to lure the Dom into his bed. Devious? Kind of. Jake was a hot catch, and the man Adam wanted more than anyone else in the world.

The closet was dark and more spacious than Adam had expected. Each wall was lined with rows of empty wooden hangers, giving them ample room to move. The cacophonous noise from the main floor was muffled as soon as Jake slammed the door closed. A strip of filtered light peeked through the crack, illuminating the enclosed space like an invitation to a dirty game. Here they were. Alone. Just the two of them, hidden from the world. Adam’s heart pounded hard. Feverish heat rushed to his head. Jake didn’t speak a word. He looked at Adam with an unmistakable hunger in his eyes, making Adam shiver. Excited. Several heartbeats of silence passed between them before Jake pounced. He grabbed Adam’s arm and pushed him against the slab of wood between their secret hiding place and the outside world.

Adam’s breath caught in his throat. He wanted to protest about his rough treatment, but before he could get a word out, Jake was there, plastering his mouth on Adam’s, suffocating him with a greedy kiss. Adam tensed. His cock hardened under his briefs. Fire seared his veins, awakening the realization that what he’d been craving for a long time had finally come true. A soft moan escaped him when Jake’s tongue pried his mouth open. Jake seemed impatient.

Jake pressed his body against him, trapping Adam with his solid bulk. Jake kissed him deeply, making his lungs feel like they were about to burst from his rib cage. Jake was so possessive. He didn’t give him any chance to breathe. Adam trembled. No one had ever made him this frisky with kisses. No one.

Just as Adam thought he was about to faint from the lack of oxygen, Jake broke the kiss and slammed his hips against Adam’s, grinding his hard erection on Adam’s. Adam swallowed a lungful of breath, and his mind muddied. Jake’s kiss had wiped his coherent thoughts blank for a moment. He might have forgotten his name for a second too.

He stared at Jake, a creature so perfect the man hurt his eyes. Standing over six feet five with ripped muscles encased in a simple tee, Jake d’Allemagne was a delectable sight. He made Adam’s mouth water. He wanted to sink his teeth into Jake’s flesh, sampling the salty-sweet taste of his skin. Wanted to know how it felt to have his body against him, naked, with nothing in between. Wanted to kneel before him and worship him as the center of his universe—one he couldn’t live without. 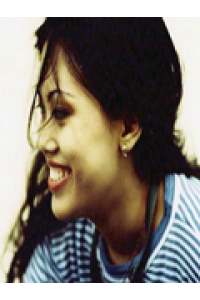 Hello, my name is Lizzie. I'm a simple gal, love watching TV, playing guitar, and enjoying chocolate and spicy food. I have been writing as long as I can remember. Originally I want to be a horror writer, like my hero Stephen King. But I find writing smut is more fun than writing dismembered body parts. I also want to be a ninja but I heard the pay is peanut. Plus my HMO does not cover throwing star accident. Wanna send me an email? Drop me a line at lizzie@iLizzie.com

This is a fairly quick read, and there is a strong emphasis on the heat level between the male characters. The entertainment value rates high!

Share what you thought about Hot Blooded and earn reward points.