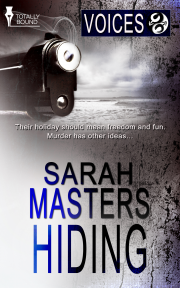 Book 4 in the Voices series

Their holiday should mean freedom and fun. Murder has other ideas…

After a murder case ruined their last break away, Oliver and Langham try again by going to the Caribbean. Surely by flying so far from home, they’ll get a few days of peace and quiet where crime doesn’t mar their holiday. Unfortunately, like murder, fate has other ideas…

They rent an idyllic vacation hut that stands on struts in a turquoise sea—so perfect, so tranquil… Until a body floats past and Langham rushes out to save their life. He’s too late, though, and after going to the police station to give a statement, Langham and Oliver are dragged into the seedy underbelly of the seemingly quiet little town.

There’s a war going on between two gangs, and with a spirit telling Oliver he must complete a request to save someone else’s life, he and Langham find themselves too close to one gang for comfort. Murder has once again dogged them—but if they’re not careful, it might actually claim them as victims.

Being kidnapped isn’t their idea of a fun holiday activity, but neither is returning home to discover the nightmare isn’t over after all…

Reader Advisory: Although books in this series can stand alone they are best enjoyed in order.

Publisher's Note: This book contains some content that was previously published elsewhere. It has been revised and re-edited for release with Totally Bound Publishing.

The heat was oppressive, even at eight in the evening. Langham wiped his brow with the back of his hand as he stepped out onto the hot Caribbean street. The air was laced with the scent of coconut—all that suntan oil, he reckoned—and the tang of brine from the ocean.

It should have been perfect. Ideal. The loveliest place on Earth. Except their haven had turned into a nightmare location, and although he knew what had happened that morning was a rare thing, their holiday—yet again—was tainted.

This town didn’t get much crime, it seemed, going by the size of the police station they’d spent all day in. No one else had been brought in for questioning, and the only people occupying the cells out the back had been Langham and Oliver. There didn’t appear to be much call for law enforcement at all. This place was so damn quiet. After what Langham had found floating in the sea around their holiday shack that morning, it meant the officers in these parts would be stretched to the limit if they worked anything like Langham and his team did. From what he’d seen, though, only two policemen plus a detective had been working all day—and not very hard at that.

He’d found a dead body. Bloated, it was, and had undoubtedly been in the water a while. It shouldn’t have been a shock that crime had followed him and Oliver once again, but he’d been shocked all the same. Murder dogged their every step at home, so why would here be any different? But was it too much to ask to be free of it when taking a Caribbean break?

Bloody seems I did ask for too much. One sodding holiday without interruptions, that’s all we wanted.

The first couple of days of their other holiday, back in the UK, had been taken over by death too—some old woman wreaking havoc and a man messing around with software that could kill then make bodies disappear.

Was that only yesterday—or was it the day before?

Time had been skewed since they’d landed here and them being holed up in a cell meant that the day had dragged on relentlessly. He didn’t know whether he was coming or going.

He cuffed his brow again. Sighed.

What the fuck’s the world coming to when even coppers get treated like criminals?

Yeah, Langham knew some coppers were dodgy, but he wasn’t one of them. It had taken the better part of two hours for Langham’s detective status to be confirmed by the UK—or maybe the police worked slowly here. During those two hours of waiting, Langham had watched the detective—Beckford, his name was—lounging at a desk through a doorway, no sign of a rocket doing wonders up his arse. The man had seemed oblivious to Langham and Oliver sweating—oblivious to the urgency a murder would have filled Langham and his colleagues with in London. The phone had trilled, Beckford had answered and a low conversation had taken place. The detective had ended the call, doodled on a notepad then stuck his hands behind his head and had a nap. Langham and Oliver had been left in that stuffy-arsed cell until Beckford had been good and ready to talk to them—to let them know their identities were confirmed and that they weren’t suspected of murder.

Can’t believe he didn’t look at the obvious. If we were home, I’d have put in a complaint but…

No use in moaning about it—it was over now. Beckford had finally realised Langham and Oliver couldn’t have killed the man in the sea because he’d been killed a couple of days ago—when Langham and Oliver hadn’t even been on Caribbean soil. Statements had been taken, long and laborious, and Langham hoped that would be the end of it. He doubted it, though. Oliver had heard from spirit earlier, and he’d told Langham this morning’s body wasn’t the only one they’d get wind of while here. Wasn’t the only death that would occur.

Fuck. We need that like a hole in the head.

Langham turned to see Oliver joining him on the pavement. Oliver was worn out, that much was clear. The lines around his eyes were back and deep crevasses bracketed his mouth. He looked older than his years. That morning, before the body had floated by and changed everything, Oliver had been almost wrinkle free. Langham found it amazing that the signs of tiredness he’d had before they’d arrived had all but vanished just by them flying away to this place.

Now look at him. Shit.

And if spirit were right, there were more wrinkles to come.

Langham cleared his throat. It was dry. There had been a distinct lack of water and food inside the police station—for them, at any rate. Beckford had certainly enjoyed a hearty lunch and several cans of Sprite, the selfish bastard. It seemed people didn’t have any basic human rights here when held by the police. Back in London, if the arrested person wasn’t offered food and drink within a certain amount of time, heads rolled.

Fuck all I can do about it anyway. We’re not in London. No, we’re stuck here—and God, it feels like we’re stuck. I didn’t think I’d say it, seeing as I just wanted to get away from the damn city, but shit, I wish we were back home.

He thought about the promise of hearing about another body and shuddered. He hated to ask the question that was waiting to come out but it had to be done. “You know what you said earlier, about me finding out about another body? Could it mean in general or did you mean here, while we’re away?”

Langham stared across the road at a table where local cuisine could be had for the price of a Coke back in London. A roof, created out of what looked like huge black refuse sacks, gave the chef plenty of shade. Langham envied him. Scents of ginger and cloves wafted over on a hot breeze that did nothing to cool and everything to make Langham more uncomfortable. Those scents had tormented him all day.

“This place…it’s too hot,” he said, knowing he only had himself to blame for their destination. He’d booked the holiday. He’d insisted they come. And look where his stubbornness had got them—a stint in the nick and tongues as dry as a deodorised armpit. “If I have to wipe my forehead one more time…”

Share what you thought about Hiding PRINT and earn reward points.