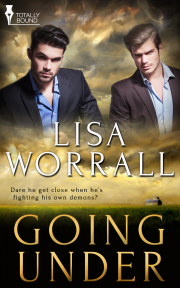 Evan Griffin moved into his remote country house with all the excitement and promise of a new start…until the strange noises began. When the ghostly attacks become physical, he is left bruised and battered, and desperate for help.

When Evan walks into the offices of paranormal investigators, Knight & Stone, Ross Stone is dumbfounded by the injuries the man bears. Injuries Evan insists were caused by an unseen assailant in his own home. Something in the man’s eyes tugs at Ross’ heartstrings. Does he dare risk getting close to Evan when Ross is fighting his own demons?

Reader Advisory: This books contains scenes of violence and references to past abuse.

“I’m late, I’m late,” Ross Stone mumbled over and over as his feet pounded the sidewalk. He bumped into other pedestrians on the way and tossed shouts of apology over his shoulder, left and right. If he’d had the time, he’d have stopped to say sorry personally, but that was all anyone was going to get from him today. If he was any later for this meeting, Jack would skin him alive. Skidding to a halt outside the austere brick building, he then all but flew up the stone steps and into the foyer.

“Hey, Burt!” He waved to the doorman behind the desk as he slipped and slid over the highly polished oak flooring.

“Late again?” Burt chuckled, returning the greeting with a lift of his hand. “Jack don’t look happy, son!” he called after him.

“Tell me about it,” Ross replied. He bounced from one foot to the other while he waited for the elevator. He sighed gratefully when the doors finally opened, and he quickly ducked inside the metal box then pressed the button for the eighth floor. “My ears have been burning for the last four blocks!”

The elevator doors slid open again when it reached the eighth floor. Ross took a step back at the expression on the face of the man waiting for him. Jack Knight was not exactly the biggest man in the world, but what he lacked in height, he more than made up for in attitude. Ross took in the crossed arms, steely blue gaze, firm set of Jack’s lips and the little wrinkle above his nose that made him look halfway between really pissed and constipated. Not that Ross thought this was the time to let Jack know that.

“I suppose you think that’s funny?” Jack said softly, menace in every word. “Do you know how long I’ve had to entertain our new client?”

“Jeez, Jack. I’m only like ten minutes late, if that,” Ross griped. “What’s the big deal?”

“Look at your watch again, Ross,” Jack ground out.

“Why?” Ross replied, not willing to play Jack’s stupid games.

“Have you by any chance noticed that the hands haven’t moved since you woke up this morning?”

“Don’t be stupid,” Ross hissed, looking back down at his wrist. “It’s—” His gaze flew back up to the annoyed man in front of him. “Shit, how late am I?”

Jack tapped his fingers slowly on his forearm. “Two and a half hours.”

“And a half hours,” Jack repeated, his tone filled with the obvious desire to kick the shit out of his partner.

“If I say sorry,” Ross—stuck out his lower lip and looked at the other man through lowered lashes—“will you promise not to hurt me?”

“Put the lip away, Stone,” Jack huffed, grabbing the neck of Ross’ T-shirt and hauling him out of the elevator. “Just get your ass in the office. The poor guy is on his fifth cup of coffee. He’s practically bouncing off the walls.” He shoved Ross along in front of him. “I’ll deal with you later. You’re lucky we’ve known each other since the womb, man, or I’d be firing your ass about now.”

“You can’t fire me, numb-nuts, I own fifty percent, besides, you love my ass,” Ross threw over his shoulder. He opened the door to their offices then dumped his bag on his desk. He quickly threw his jacket on the chair and ran a hand over his short, dark blond hair before grinning at Jack. “Come on then, we don’t want to keep him waiting.” He snorted, ignoring Jack’s questioning as to whether or not Ross’ birth may have been entirely legal, and opened the door to the smaller room where they interviewed their clients.

“Mr Griffin?” Jack shouldered his way past Ross, entering the room first. “This is my business partner, Ross Stone.”

Ross approached the man, who was looking out the big window encompassing one whole wall of the room. “Mr Griffin,” he said, holding out his hand. “I am so sorry for my tardiness. Hell of a morning.” His gasp was involuntary when the man turned and slipped long, slender fingers into his. The face he looked into was ruggedly handsome with a square jaw and high sloping cheekbones, and quite possibly the hottest he’d seen in a long time, even covered with bruises and scratches.

I live near Southend-on-Sea, a small seaside town just outside London on the South East coast of Essex, England that boasts the longest pier in the world where I am ordered around by two precocious children and a dog who thinks she's the boss of me.

I've been writing seriously for three years now and love giving voice to the characters warring to be heard in my head, and am currently petitioning for more hours in the day, because I never seem to have enough of them.

I am recommending this to those who love angst, surprising violence, hauntings, ghosts from the past (living and dead), hot sex, the beginning of a beautiful relationship and a happy for now ending, that...

This fast paced and smooth flowing plot sends chills down the spine with suspense, drama and romance. The well written scenes inspire vivid images that capture the imagination and the well orchestrated drama...

Share what you thought about Going Under and earn reward points.

Lisa Worrall - BTSe mag, What Do You Like to Read

I was asked recently by a reader what it is that I like to read. She said she didn’t want to assume it was romance, mm or otherwise, just because I write in that genre.  I laughed and told her she was right… not to assume because, although I am a steadfast fan of a lot of my fellow writers in the mm genre,  when I do have some downtime you’ll find me deep in the pages of a good horror!