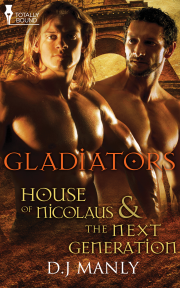 Book three in the Gladiators Series

Since the death of his father, Claudius has descended into debauchery and decadence, leaving Samson and the others feeling very nervous about their future.

Gold intends to buy Samson but is sure he will be denied so he embarks on a dangerous mission. Meanwhile his wife increases her demands on him, and insists on having his child; and Marius becomes suspicious of Gold's activities.

Book four in the Gladiators Series

To follow in his father's footsteps, Gold's son will need to defeat Ariston in the arena to become champion…but Ariston might be the love of his life.

Nicolaus has lived in the shadow of his father all his life, a father who was the greatest gladiator of them all. His desire is to prove himself in the arena, even though it is against his father's wishes. He also has other desires, forbidden desires for his father's lover, and a love/hate relationship with the slave he must defeat if he is to reign victorious as a gladiator in the arena.

Ariston falls in love with Nicolaus the moment he sets eyes on him. A slave all his life, he has never known freedom but he is the unbeatable champion. The fact that Nicolaus can't decide whether to bed him or kill him greatly complicates his life when he becomes the newest addition to Gold's ludi.

I stood perfectly still. I didn’t dare move although it pained me dearly to watch Gracia slide her hand up Julian’s well-muscled thigh, mostly because I knew Julian detested her touch so much.

Claudius regarded me from where he half lay on the sofa. He was drunk again as usual. Somewhere in the house I could hear the baby crying. Octavia, Claudius’ wife, began to sing a lullaby. The tune wafted down the corridor like a clear bell.

Gracia had pulled Julian down the hallway to her private bedchambers and I clenched my jaw and restrained my anger.

I’d been standing there, completely naked in front of him, for the last half hour. I had no idea what game he was playing this time, but with Claudius it was anyone’s guess.

A newly acquired male slave, completely naked like myself, lowered grapes into Claudius’ mouth. The slave’s skin was coffee coloured, and his genitals were bound so he always appeared to be erect.

Claudius reached out and played casually with the slave’s genitals. He looked at me. “Want to fuck his fine ass?”

“Slave,” Claudius bellowed suddenly, “lean over my lap, use your mouth on my cock, and Samson, get over here and fill his ass.”

The slave leaned over Claudius and began to work on his erection.

“Spread your legs wide,” Claudius commanded, slapping his ass a few times. “Feel how firm it is.”

I came closer, waited for permission. I couldn’t deny that the ass in front of me was enticing, so firm and round.

Claudius nodded. “Prepare him. Play in his ass, fuck him with your fingers.” He fondled the slave’s genitals again. “Suck me, deeper,” he commanded.

The slave took more of Claudius in his mouth.

I spread the slave’s ass with my hands and screwed my finger into his rosebud.

He squirmed as I went deeper. He was very tight, maybe he’d never had his ass used before. I stroked my own cock and coated my finger with come. I pushed my finger deeper. He moaned and Claudius yelled out. “Suck, you slut!”

I fucked the slave with two fingers now, spreading him wide, then teased his hole with the head of my cock. I pressed up into him. He raised his head and moaned, then cried out, at first in pain then as I began to really ride him, it seemed the pain had turned to pleasure.

Claudius moved off the sofa and I pressed the slave across it and really worked his ass, moving up and down in a fluid motion.

I was almost ready to come when I felt Claudius behind me. Something smooth and hard poked my ass and I grunted as I felt it move up inside me. Claudius began fucking my ass with some object and I gasped, feeling the burn.

I slapped the slave’s ass and pumped harder, then felt Claudius pull me back. He brutalised my nipples until I wanted to scream, pulling and twisting them, and he moved the object deeper inside me until I felt completely filled by it.

“Can’t be stretched much more than that, gladiator,” he sneered. “Even Gold couldn’t fuck you that well, could he?”

The mention of Gold caused my cock to pump. I released my load.

Excerpt From: The Next Generation

My gaze followed Samson around the room as he playfully flirted with my father. The sun had barely risen in the sky and he was still a little drowsy from sleep.

"Why must you always arise so early, Gold?" Samson murmured, leaning down to kiss my father lightly on the top of the head. "The training will wait."

"The festivities begin Saturday, Samson." My father gave him a slight push away. "Everything must proceed smoothly if we are to gain favour."

"Favour with whom now?" Samson grinned at me as he said it before popping a grape into his mouth. "I don’t care about those stuffy noblemen. Do you care about them, Nicolaus?"

I think I might have blushed. I’d been doing that a lot lately. In fact, all Samson had to do was speak my name and I blushed. "No, no, I don’t care."

"Listen to him." Gold shook his head, motioning to the slave called Pleasure to pour some more water into his goblet. Father always saved a special smile for Pleasure, which I knew grated on Samson. "You want to gain a reputation in the arena, then you must care about the nobles."

Of course I took that to heart. I didn’t dare not to. My father had been one of the greatest gladiators of all time. His prowess and skill never ceased to astound even now. I asked only that I be half as good as he one day. "Why not let me compete, Father?" I looked up from where I sat on the settee. "I’m ready. Julian says so."

"Julian is not your father. I say you’re not ready."

"Gold," Samson said, "do you not remember what it’s like?"

"Don’t you start now, Samson," my father warned as he walked across the vast floor. "I was against this from the beginning. Nicolaus will go into the arena when I say so!"

"But Petorio is already involved in everything." I jumped up, ready for yet another verbal battle with my father. "And he’s mediocre at best. Everyone says I am better than he!"

"Petorio is involved in managing the ludi...training. He doesn’t compete in the arena."

"You’re better than me, are you, cousin?" We all turned to look upon the owner of that snarly voice. I already knew it to belong to my half-brother, Petorio. My father had been bought by his own brother - the father of Petorio and Garner - and freed. When my uncle had wanted to go into the arena as a free man, my father had trained him - promising to look after his family if anything should happen.

My uncle was slain in the arena and my father became head of the family, looking after his wife and children and eventually marrying his brother’s widow. My uncle’s widow gave birth to me and died shortly after I was born. This had created the rather bizarre circumstances where my two cousins were also my two half-brothers.

I braced myself for his onslaught. He’d always picked on me while I was growing up, punching and beating on me when he thought no one was looking, always referring to me as his cousin, rather than his brother. Since I’d grown, he’d stopped doing that, especially when I began to punch back. I harboured a special dislike of him.

My father headed his nephew off before he got to me. "I’ll have none of that in this house. Save your energy for the festivities on Saturday, Petorio!"

Gold had his hand on Petorio’s chest and Petorio relaxed. He’d never take on my father. He knew better.

"It’s not fair, Uncle," Petorio grumbled. "Nicolaus thinks he’s better than I and - "

Share what you thought about Gladiators: Vol 2 PRINT and earn reward points.