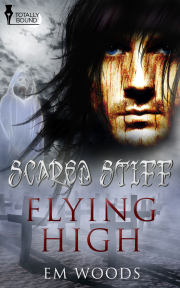 Sometimes a mate bond can be damned inconvenient…as well as crucial to survival when a murderer sets his sights on one of the pair.

As if life isn't tough enough for a half Fae, half butterfly shifter, Tate is thrown for a loop when his mate turns out to be a reclusive Lynx shifter. Cain is focused on tracking his brother's killer, and stumbling across his mate at the same time he finds the murderer wasn't in his plans. Especially when the discovery means the killer gets away.

Sparks fly between the Lynx and the halfling even though neither wants to cave to a fated-mate bond. But when a serial murderer comes after Cain, Tate must call up powers he rarely uses to save them both.

Cain Howell’s patience had paid off. Micah’s killer was here. Serial killers were like that. They took trophies. They visited the scenes of their crimes. This one already had his trophy. Cain had known from the day of his brother’s murder that the killer would come back. It had been just a matter of time.

The wind came at Cain from the southwest. Pollen and small wisps of grass swirled around his paws to settle in the field. He tilted his chin to let his fur ruffle in the late fall breeze. The temperature would drop with the setting sun, but Cain wasn’t worried about that. Enough light lingered for him to see.

There was something else—someone else—here with him. He felt it to his core. The wind shifted and his whiskers twitched as a scent caught his attention. He narrowed his eyes and crouched low to the ground, concentrating on that smell. The hair on his back stood on end as he scanned the area, looking for the source of the stench.

He’d dreamt of its owner. Dreamt of the faceless man responsible for Micah’s death. Dreamt of letting his cat free and tearing the coward to pieces.

Every muscle in his body tensed. Cain growled low, his belly knotting at the intensity of pain that scent brought back. He couldn’t lose focus, though. He needed to watch…to see.

Then a second scent surrounded him…subtly different but fundamentally the same. It reminded Cain of meadow grass at the height of summer—hot, woodsy and fresh. Reassuring, soothing… Intoxicating. His pulse raced as longing wrapped around him. He lifted his nose into the wind, letting his mouth fall open to absorb the smell, wanting more.

A harsh whisper, like a snake slipping through dry grass, was the first sign of danger. Cain huffed slightly, confused, every nerve ending tingling with fire. Then his ears began to ring and he swiped at them with his paws.

A man’s laugh echoed across the field. Foul, dripping with oily pleasure at his game. Cain mewled as his chest constricted and pressure built in his head. He curled in the dirt, rubbing his ears against the earth to ease the pain, but nothing helped.

Soft murmuring to his right swirled like a soft breeze around him, allowing him to catch his breath. He wanted to shift to his human form, to escape the discomfort completely, but with a killer so close he couldn’t risk exposing himself.

“You will not harm him, Lorin Kehl.” Cain flinched as a husky voice ripe with anger boomed over his head.

“Who are you to tell me shit?”

“I am Tatham, Monarch prince and a member of the Fae Court.” A man with pale skin, dark hair and fierce, black eyes stepped into Cain’s line of sight.

Two Fae, if his guess was right.

The one closest to him, Tatham, wasn’t wearing much—a pair of loose cotton pants that swirled around his legs as though the breeze was stronger there. Cain knew instinctively that Tatham, strange as he seemed, was responsible for easing his pain.

“You will not harm what is mine.”

Cain rose from the ground, chuffing at the way the man claimed him. Fingers smoothed through his fur. When did he get so close? Cain couldn’t summon the energy to care. More of that touch, more of that woodsy smell… That’s what he wanted. He rubbed his cheek against Tatham’s hand.

“Lookie there. You’ve got yourself a pet.” Lorin’s voice carried across the field. Rookie mistake. Careless. Fae could be that way. Mean to the core, spiteful. Cain scanned the left tree line and in seconds had picked out the thick branches of the birch tree obscuring the hunter from view.

Tatham’s fingers clenched for a split second before he scratched behind Cain’s ear absently. “Pet. Interesting word for this beautiful specimen.”

“If he ain’t your pet, step on away from him and I’ll bag ‘im.” Another laugh. “I’ll pin his ear next to his brother’s. Double points for kin.”

Red flooded Cain’s vision. He snarled, slashing at the firm grip on the nape of his neck. I will kill him. Need to…

Energy crackled around Tatham, raising the fur on Cain’s body, igniting the anger in Cain’s blood. Heat, so intense that he nearly buckled with it, flooded his body. A grunt escaped his throat and Tatham tweaked his ear. “No.”
Buy Now

Hi all! Let's see, a little about me. I am an Army brat, which lends to my imagination…and I am a wife & mother of two energetic little boys, which gives me my sense of humour. I started writing in high school for the newspaper and have written steadily since then for my own enjoyment. I have lived a little of everywhere thanks to the travel bug I inherited from my dad, but currently am push-pinned in southeast Michigan. A typical day is a little crazy but I always work in writing time and I love chatting with friends. Feel free to visit me at my website.

Ms. Woods knows how to build a story around her characters. Cain and Tate are wonderfully drawn out men. They come from totally different worlds and just the idea of mating a butterfly to a lynx seems...

Em Woods is a master at taking the seemingly impossible and making it work. In Flying High, a lynx is mated with a butterfly while that butterfly is also half fae � most unusual combinations. But...

Share what you thought about Flying High and earn reward points.