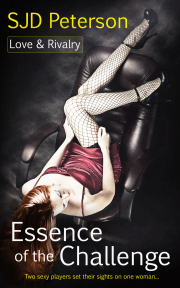 Essence of the Challenge

Book 1 in the Love and Rivalry series

The competition is on when two sexy players set their sights on one woman who has no intention of being anyone’s prize. Will the ultimate challenge be true love?

With too many relationships ending in heartache under her belt, the new and improved Symone Adams is loud, proud and on the prowl. She has removed the heart she’s normally worn on her sleeve and tucked it safely under lock and key. What she wants now is to explore the appeal of meaningless, mind-blowing sex. After six months of self-imposed celibacy hell, she heads to Menjo’s and directly into the path of two very determined players.

Zander and Marco are pros when it comes to seduction, yet each has grown bored with their conquests. When these two strangers set their sights on the same stunning beauty, the competition is on. Both embark on a full balls-to-the-wall effort to win not only Symone’s body, but her heart as well.

What none of them can predict, though, is where their chance encounter will take them, especially Marco and Zander. While the men focus on winning Symone, it’s the electricity arcing in the air between them that will be the real challenge.

Dogs may be a man’s best friend, but the cute salesman behind the counter in the shoe department at Macy’s was Symone’s. At least for today. Add in the twenty percent off coupon to her final bill and he was her favorite BFF.

A new happily colored top revived her and the irresistible strappy heels in red were too hard to pass up. It was as if, through shopping, she found a new focus and it lifted her mood. When real life sucked, or was too hard to figure out, retail therapy was the best way to solve it.

With their mountain of purchases from a very productive morning at the Waterview Mall, Symone followed her best friend, Sedesa, to her little Dodge Neon. After dropping off their packages, they headed to an outdoor café within walking distance.

“I have to admit you were right,” Symone acknowledged as she sat at a small bistro table across from Sedesa. “I feel much better. My credit card hates you, but I thank you.”

“How long have you known me? You should know by now that I’m always right,” Sedesa responded without looking up from her menu.

“Figures you’d keep your head down when you said that. No way could you have done it with a straight face, otherwise.”

“Shut up,” her friend teased playfully with a flip of her hand. “I’m going to have the Berry Delicious Summer Salad, what about you?”

“Cheeseburger and fries,” Symone said without picking up the menu.

“Have I ever told you how much I hate your metabolism?”

“No you don’t, you envy it. Besides, I’ll eat something light for dinner. I’m starving.”

“Skipped the late dinner and went right to dessert, did ya?” Sedesa waggled her brows suggestively.

“No. Travis got tied up in a meeting last night so I skipped dinner in favor of a bag of natural popcorn, mineral water and old Three’s Company reruns.”

Travis, as a new financial advisor with MET Life, couldn’t turn down clients. He was still working to build a solid client base and, over the last couple of months, he’d been swamped. Feast or famine, she supposed. She just wished he were home more in the evenings. He’d apologized, but assured her it was for their future.

Instead of whining, she needed to be supportive, but damn it, she missed him. She pushed away the sadness that she’d been wallowing in this morning and that threatened to come back to the surface where it belonged. It was a gorgeous day. She’d spent time with her closest friend and had some sweet new clothes and shoes.

“You should have called me, we could’ve hung out,” Sedesa commented before taking a sip of her water.

“I thought you had a date last night?”

Sedesa wrinkled her nose. “He didn’t make it to dessert.” She waved off any more on that subject. “People must have money to burn again, invest or whatever. That’s, like, what, the fourth time Travis has canceled on dinner this month?”

Fifth, but she wasn’t counting or anything.

“He’s been really lucky. A lot of the other advisors are struggling, but Travis has a way with people. He’s really good at his job.” The waitress came and filled their glasses and took their order.

Symone tried not to think about how many dinners he’d missed lately. The weird tightening in her gut was getting annoying and she didn’t want to deal with it today. “So how many pairs of shoes does that make now?”

Over lunch, Symone kept the conversation away from herself and Travis and focused on Sedesa. Keeping her friend distracted was easy—all she had to do was ask about the men she’d dated, those that had caught her eye or the ones she planned to go out with in the future. If by chance that topic got slow, there was always shoes.

After paying for lunch, Sedesa suggested they check out a new boutique in Clover. Squeezing into the packed Neon, they headed toward Glitz & Glamour Boutique.

Symone was staring out of the window, watching the buildings pass in a blur of colors and shapes when Sedesa screeched. “Damn it!”

Jerking, she turned toward her friend, whose face was bright red, her jaw tight. “God damn it, I hate construction. Are detours really necessary?”

A neon orange Road Closed sign flashed its lights, stating the obvious. “Wasn’t it you who has been complaining for the last few months that they needed to fix this stretch of road? You got your wish, what’s the problem?”

Sedesa huffed, tapping the steering wheel. “The problem is the fucking detour. I hate detours. They never make them clear and I end up getting lost. Hold on,” she warned, and gunned the engine, whipping the wheel to the right and turning.

Symone slammed into the passenger door, her arm taking the brunt of it and pain radiating up to her neck. “Christ, Mario Andretti, slow down and give me more of a warning next time.” She rubbed the throbbing muscles. “No one gets lost in Wakulla so untwist your panties.”

“Sorry, detours are just a pain in the ass,” Sedesa apologized and eased off the gas pedal.

They had only made it a couple of blocks when Symone spotted a familiar vehicle parked, partially obscured by an overpass. “Hey, that’s Travis’ car. Pull over, he must have broken down.”

“Yeah, it has the same broken tail light. Just turn there.” She pointed to a driveway to turn in to. “Pull around next to it.”

Sedesa eased the Neon up beside Travis’ car. Part of Symone was shocked by what she was seeing but another part, the logical part, wasn’t surprised.

Fate had intervened, sending them on such a detour. Instead of arriving at a cute little shop browsing through aisles of smelly soap and candles, she was sitting in her best friend’s car looking at her boyfriend’s exposed ass bobbing up and down between spread legs.

In that moment, something shifted deep within Symone. Growing up in a quiet suburb of Detroit, she’d had the fairy tale childhood. Her parents had been devoted not only to their children, but to each other as well. There had been the white picket fence, a soccer mom van in the driveway and ballet classes on Saturday morning. Symone had rarely broken a rule. Not against her parents, teachers or pastors. She’d tried to please everyone. In high school it had been much the same—she’d kept her grades on the honor roll, done community service, participated in after-school activities and sports. She was the all-around good girl.

Sitting there watching Travis’ ass as he pounded into some unseen woman, Symone felt numb. He was just another in a series of men who had taken advantage of her wholesome good nature. It had been the same with her first high-school boyfriend, then her college sweetheart and now Travis.

While her goodie-two-shoes ass was crying her eyes out, the naughty women of the world were out having one hell of a good time with the men she was home waiting for. The bad girls didn’t wait for men to throw them a few scraps once in a while. They went out and made their own fun.

Sitting in the quiet car—the only sound a low melody playing from the car stereo—Symone watched as Travis threw his head back, his face slack, his lips parted, and felt nothing. She continued to watch as he jerked with the aftershocks of his orgasm, and for a moment, the world stopped when he opened his eyes and his gaze met hers. In that split second, it all became perfectly clear.

A sly smile curled her lips and she winked at the horror-stricken expression on Travis’ face, before turning to Sedesa. “Let’s go shopping. I saw a pair of stilettos that would be perfect to add to my collection.” 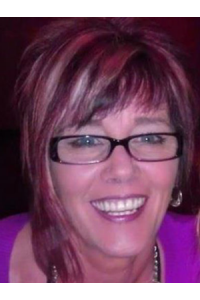 SJD Peterson, better known as Jo, hails from Michigan. Not the best place to live for someone who hates the cold and snow. When not reading or writing, Jo can be found close to the heater, checking out NHL stats and watching the Red Wings kick a little butt. Can't cook, misses the clothes hamper nine out of ten tries, but is handy with power tools.

All in all Essence of the Challenge is a great start to this new series and I look forward to see how this menage handles everyday life going forward!

It is definitely hot, and develops into a fascinating possibility, which remains elusive, but promising. Symone's morph into vamp is quite amusing, and she seems to become more physically attractive throu...

Share what you thought about Essence of the Challenge and earn reward points.

Other books in the Love and Rivalry seriesView Series Page