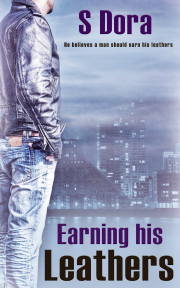 Call him old-fashioned, but Connor believes a Dom should earn his leathers.

His appointed tutor isn’t Connor’s cup of double espresso by any stretch of the imagination. Stone Carver is dark, tall, muscled and he has the face of a man who has seen one fight too many. Stone notices Connor’s hesitation and sends him away to find someone to have fun with, and to return when he has made up his mind.

Connor meets Jesse, who is everything he has ever dreamed of, and he wants nothing more than to stay with the sweet—potential—submissive. He decides, however, to meet the challenge of submitting to Sir Stone, promising to return to Jesse after he has earned his leathers.

During one long day of pain, pleasure and a smidgeon of humiliation, Sir Stone teaches Connor more than he had bargained for. But has he learned enough to be the Dominant Jesse deserves?

Publisher's Note: This book has previously been released as part of the His Rules anthology with Pride Publishing.

Connor Lee liked to get lost during his walks through the streets of the city. The app on his smartphone could show him the way from A to B with a minimum of fuss, but where was the fun in that? Would he have happened upon the small leather shop, hidden in an alley as if it didn’t want to be found, otherwise? At first, he didn’t recognize it for what it was or even know if it was open to the public. Curious, he pushed the door, and there was no mistaking what was on sale. The scent of leather was overwhelming. Jacks, trousers and chaps were on exhibition like art in a museum.

“Is it okay if I look around? I see stuff here to make any leather man drool.”

The man grinned. “I’ve seen only two kinds of reactions when people open the door. They either get away as fast as they can, or they think they landed in paradise.”

“I don’t think you’ll have to guess which one I am.” Connor touched the sleeve of a black jacket. “By the way, you’re the owner? Of the shop, I mean. Great business.”

The man nodded. “Yes. And thanks.”

Connor walked from leather piece to leather piece, admiring the quality of the material and the perfect neatness of the stitching. Someone with serious talent and dedication had worked on this.

“All handmade.” It wasn’t a question.

“These are demonstrations of what my husband and I are capable of. We sell pieces individually made for that particular customer. Scot March is the name.”

“Connor Lee.” This was the sort of shop where trading names might prove as important as trading goods for money. “Your shop isn’t exactly easy to find, even for someone aware of its existence. Why keep the treasure hidden?”

Scot smiled. “Those who need to find us, will.”

“Even if I started living on cheap bread and peanut butter for a year, I still wouldn’t be able to buy any of this.” Connor hesitated to continue, because if he was honest, it wasn’t just a matter of money.

If he wanted, he could put in more hours of work as a bouncer at the clubs whenever he needed cash. He was happy to live soberly, as long as he had a roof over his head, a bed to sleep in and a table and chair to sit at for writing.

“Call me old-fashioned, but I believe a man should earn his leathers, especially for something as unique as this. Because you don’t just make clothes, do you?”

Scot shook his head and pointed at another door. “Feel free to take a look.”

If the first part of the store had been an open question as to whether this was all about clothing, the second one definitely gave the answer.

This had to be richest collection of whips, floggers, paddles and other S&M paraphernalia Connor had ever seen.

“This, you definitely have to learn to use.” Scot stood next to him.

“How do you know I want to be the one handling these beauties instead of feeling them on my skin?”

Scot chuckled. “You remind me so much of my dear Master, the only lover I’ve ever known and the only man I get on my knees for. That look in your eyes when you see a well-made flogger is a damn giveaway. He was trained by one of the best Dominants that ever walked this earth. He wanted to deserve me.”

Connor nodded. There were things he would gladly share with a fellow Dominant—for instance, his need to understand, though he wasn’t sure exactly what.

Scot must have seen his hesitation, because he walked back to the sales counter in the front room and scribbled a few words on a piece of paper. “No promises or guarantees, but tell them Alec’s Scot sent you, and who knows what will happen? It might change your life forever.”

“Those are big words. Care to tell me a bit more?”

“Nope, you have to find out all on your own. Or not, of course, if you so wish.”

He imagined he at least made a decent enough first impression. He was a six-foot-tall man in his mid-twenties, in fine shape thanks to good genes, long walks and a couple of hours in the gym each week. From what he understood from others, he wasn’t too awful in the looks department. He never had trouble getting men into his bed and on a few occasions he had been invited for a bit kinkier activity than simply two men getting it on. He had eagerly tried out the role of Dominant, but had run away from the mildest suggestion of playing submissive for anyone. He admired the courage of men who were able to let themselves be bound and paddled, but he wasn’t one of them. He needed to be in control, to see another man kneel and accept whatever pain and pleasure he had in store for him. However, he wanted to earn that privilege.

Was he being offered the chance to learn how to become a trained Master from those who had gone through the same process themselves? Did it still exist? He hardly ever heard about anything other than people simply choosing their roles and acting on them. Earning your leathers, in its many variations, was becoming a thing of the past, deeply hidden in gay history. But he couldn’t be the only one who wanted to be worthy of his leathers, could he? There must be submissives and Dominants who still cared about earning the symbols of power instead of simply buying or having them handed to them.

He was probably overthinking the whole business. Why not simply go there and see if it was any fun? He didn’t have to work tonight and he was curious enough to give up an evening of writing for the unknown. Wasn’t facing the unknown a great way to find inspiration for yet another story?

Standing naked in front of his rack of clothes, Connor realized he had no idea what to wear to his blind date with, what…one, two, a dozen?…men. Even with his educated guess that this was a meeting steered toward individuals interested in BDSM, how was he to know if they wanted to see a guest—a potential member of their club—in a kinky outfit or not? He did own a few leather pieces, though none of them were remotely of the quality of what the hidden shop carried. He could wear his leather jacket and boots, together with a pair of tight leather trousers and a clean shirt.

But why would he go in an ensemble that said he had already given himself permission to wear the clothing of a Dominant, while stating that he wanted to earn that specific honor? Yes, perhaps it was silly, but he was going to that place and meeting those people, wearing his jeans, a shirt and his sneakers. Perhaps they were able to give him the one thing he craved, to help him answer a question he hadn’t yet formulated.

He took out the clothes he’d decided to wear and put them on the bed for after his shower.

He had no idea what would happen, but while he shampooed his hair and lathered his body, he happily fantasized about the possibilities.

He found himself in a large space filled with everything even the most spoiled lover of kink could possibly desire. A quick glance told him there were at least half a dozen pieces of bondage and sex furniture, a wide range of whips, floggers, paddles and so much more. He wasn’t alone. Several men, all in leather, looked expectantly at him.

He knew why he was there—to show them he was worthy of becoming one of them. To become a Master among Masters.

Truth be told, any healthy-looking man willing and able to have sex with him was enough to make him consider a one-night stand, but one particular type made his heart beat a fraction faster and made his cock just that bit harder. Blond hair, blue eyes, slightly shorter than he was, slender but not skinny, and above all a born submissive. The man of his dreams had an ever so slight hint of androgyny in his features while still being very much recognizable as male.

Connor looked. There he was, the one he had dreamed about since he was a teen. All gorgeous smile and eyes as blue as sapphires, he gracefully sank to his knees, waiting for Connor’s orders.

“What is your name?” Connor asked.

“What would you like to call me, Sir?” was the simple answer.

“That won’t be necessary. Everyone has his own name. So, what’s yours?”

“Well, you do look like an angel. But how did I get to be this lucky?”

“I asked if I could be your reward, Sir.”

With a shock, Connor suddenly realized two things. First, that he had a hard-on, and second, that enjoying an elaborate wanking fantasy under the shower took time. Too much time, and he didn’t want to make a bad first impression by being late. He’d better concentrate on the job at hand. He grinned at the bad pun, as he started the fast, firm stroke he knew to be effective very close to a hundred percent of the time.

Share what you thought about Earning His Leathers and earn reward points.