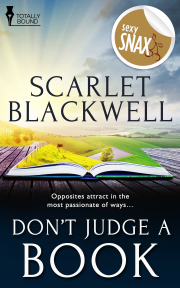 Opposites attract in the most passionate of ways.

Bookworm Rhys Middleton lives in the idyllic town of Hawks Bridge and spends his days working at the local library, his evenings quietly reading. He thinks it’s all about books and even the occasional interruption ‘real life’ throws his way cannot change his beliefs.

It’s a rude awakening for him when car thief Darren Dewhirst arrives to do his community service, turning Rhys’ world upside down. Rhys thinks the man is uneducated, only to find him reading classics. He expects him to behave like the criminal he is, only Darren doesn’t. Rhys isn’t exactly out and proud, while Darren is in denial about his sexuality and hangs around with the sort of people who wouldn’t tolerate a relationship between him and Rhys.

They are wrong for each other on so many levels, yet rejection only makes the need greater…

Rhys Middleton slammed the phone down, breathing heavily, and paced the small area behind the desk, trying not to catch the eye of his colleague Emma, who was regarding him curiously from the Young Adult section.

Mrs Shaw had ruined his day. Was it his fault she couldn’t get her books back on time and ran up exorbitant fines he had to chase her for every month? Then she’d go all defensive and be so rude and obnoxious to him. Hey, don’t shoot the messenger. He gave one final loud sigh and stalked out from behind the desk just as a timid girl approached with a stack of textbooks. Let Emma deal with her.

Rhys headed for the bathroom, banging open the door before hurrying to the sink to splash some cold water on his face. He took a few slow breaths, staring at himself in the mirror. It wasn’t like him to be so quick to anger but really, Mrs Shaw was going to be the death of him. Perhaps he could suggest to his boss, Veronica the crazy cat lady, that it was someone else’s turn to deal with her now.

He wondered if the cause of his stress actually wasn’t Mrs Shaw at all but the community service kid expected later that morning. The worst part of Rhys’ job—some spotty scrote caught shoplifting or car thieving sentenced to community service at his library. What exactly had he done to deserve that?

Apart from Mrs Shaw, his life was so blissfully peaceful most of the time, working five days a week in the small, but cosy local library. Set a few miles outside the seaside town of Whitehaven in the heart of the Lake District, the sleepy town of Hawks Bridge was awash with nature and beautiful scenery. It was an affront to his sensibilities and his sense of propriety to have these vile individuals thrust upon him. Rhys knew he was a nerd. He lived his life closeted by books. When he finished at the library, he went home to his small flat that was overrun by books to the detriment of all else and carried on with his one-way love affair. As long as he could drift away to the fantasy world an author had created for him, he didn’t much care about anything else. It was just a shame that once in a while, he got a rude awakening.

He shivered, patted his face dry carefully with some paper towels then headed back outside. Emma was behind the desk, serving an old lady. A tall, gangly woman in her mid-forties with flaming red hair, Emma treated Rhys with fondness, often bringing him home-made cakes and telling him he needed fattening up. Rhys wasn’t all that interested in food. When his belly rumbled, he ate something. If it didn’t, he didn’t bother.

“What are you so cross about?” she questioned him as he slipped behind the desk and grabbed a stack of just returned books.

“What do you think?” he replied, arranging them on the trolley ready to go back to the shelves.

“That you’re looking forward to the community service lad?” She winked at him then wished the old lady good day as the customer walked out bowed under with a job lot of Mills and Boon.

Rhys scowled at her. “Might I remind you what happened last time?”

Emma arranged some pens in the holder on the desk. “You mean when you called him an illiterate Philistine for saying Charles Dickens was a boring, old, dead fart, and when he’d found out what you meant, he came back and punched you in the face?”

Rhys reddened and shoved another handful of books on the trolley. “Yes, that’s it.”

“Can’t they? Have you known joyriding junkies from council estates to be well up on their Shakespeare then?”

Emma shrugged. “Not exactly, but you could teach him. Make him see that reading Macbeth or Bleak House or Jane Eyre is much more fun than leading cops on a ninety-mile-an-hour car chase.” She looked thoughtful. “Actually, I’m not sure if it is.”

“You’re not helping,” Rhys said and stomped off.

The encounters of these two men are explosive–in every sense and on every level. Their banter is fun, the sex they have is hot, and their relationship extremely stormy. All of that makes it all the more...

What a delightful little read. I liked these two.  They each had things in their lives that they had to overcome – like huge chips on their shoulders.  As “true love” will, they brough...

Share what you thought about Don't Judge a Book… and earn reward points.

Why I write gay romance

I wasn’t so different from other man on man or m/m authors in that I came to it via fanfiction. I became intrigued by the rumours surrounding two members of one of my favourite bands. Because they are both hot, I was titillated rather than disturbed by the idea that they might be sleeping together. I was shocked though when I found stories about them on the internet. For all of two minutes. Then I wanted to try my hand at it because I really wanted to write these two gorgeous men together as I imagined them to be.