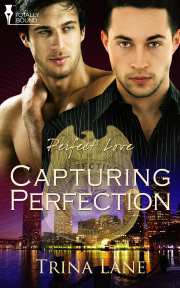 Book 3 in the Perfect Love series

Two men united by a bond neither time nor trauma could break now seek to capture the love that beats within their hearts.

Clayton Phillips and Logan Callen found each other at the tender age of thirteen. The two foster brothers quickly became inseparable, relying on each other for support to move beyond their troubled pasts. However, one whispered confession changed the course of their lives. Now sixteen years later the two men are together again, but the reunion is far from sweet.

Logan, an Army Ranger veteran, is trying to heal from both the emotional and physical trauma he endured while deployed in Afghanistan. Clay, a Boston Police Detective, is determined to rebuild their once close bond. Both men have withheld a secret from each other. Both men are in love—with each other. Can they work together to overcome their pasts and build a future together, or is it too late?

Reader Advisory: This book can be read alone, but may be better enjoyed when read as part of the series.

Detective Clayton Phillips stared at the screen of his ancient desktop as the words of the report for his latest bust slowly appeared on the screen. He swore he had the slowest computer in the entire precinct. The letter keys were so stiff that each strike felt as if he were taking a gavel to a strong man attraction at the local carnival. The monitor had a purple hue, and every once in awhile, he heard grinding noises from the CPU sitting on the floor at his feet.

His frustration levels had nearly reached maximum capacity. Of course, it didn’t help that the maintenance crew was working on the air conditioning in his South Boston station, and the air in his office was currently as stifling as the dankest jungle on earth.

A drop of sweat trickled down his temple, and the cotton of his shirt stuck to his damp back in the July heat. A fresh cup of coffee sat on his desk. As much as he needed the caffeine after spending all last night on a stakeout, he couldn’t stomach the idea of drinking something hot.

He scrolled his mouse up to the top of the report and re-read everything, making sure all the details were accurate. He heaved a frustrated sigh when he finished reading the suspect’s confession.

It was entirely possible that criminals were getting dumber everyday, or maybe, with the state of the economy, more people were getting desperate enough to commit stupid crimes. Take for instance this last case. A twenty-two year old construction worker—who’d been out of work for three months—had shoplifted from a convenience store. What would have been a Class C misdemeanour had turned into a felony when the clerk had confronted the would-be thief with a gun he’d kept under the counter. As the two had struggled, the gun had gone off, killing the clerk. When Clay had brought the suspect in for questioning the man had broken down in tears, saying all he wanted were some diapers for his kid. Now one man was dead and another’s life was forever changed. He hoped the D.A. wouldn’t put the screws to the kid too badly. He had to pay for the crime, but Clay couldn’t help but be sympathetic given the circumstances.

Clay clicked the file closed and sent it off to his captain. As he did, his eyes landed on the photo of Logan, his foster brother. In it, Logan was dressed in full BDUs and field gear. Behind him was a snow-capped mountain, and beneath his feet was the arid ground of Afghanistan. On his face was a smile Clay hadn’t seen since their early college days together, before everything had changed. He touched the image in the metal frame, wishing he knew how to help Logan find that smile again.

The fact that he and Logan once again lived in the same city—not to mention the same apartment—was a miracle. When one of Logan’s platoon buddies had called Clay, saying Logan had been given a medical discharge and needed a place to stay, Clay had asked where to pick Logan up before the man had finished speaking. At the time, it’d been almost nine years since he’d seen Logan; sixteen since his admission had caused a rift in their relationship and Logan had taken off without a word. Clay had regretted his actions every day since. His life since losing the man he considered his brother had been an empty shell. Now that he had Logan embedded in his home, Clay was determined to do whatever was within his power to not only help Logan heal from his injuries but to get them back to the closeness they’d shared since they both joined the Shelby’s household at the age of thirteen.

Clayton and Logan, the deadly duo as Mrs. Shelby had once called them, had been inseparable throughout their teen years. When their individual worlds had exploded, the two teenagers had been thrown together by the system and forged a bond thicker than the blood of those relatives who’d abandoned them. Being foster brothers in a house filled with love but meagre means, it was second nature to share everything. When Clay had begun to suspect there was something different about him, it was the first time he’d kept a secret from Logan.

In high school, it had been easy to put off any unwanted advances of the female variety. They’d always been busy with one sports team or another. They’d known scholarships were their way to college since they had no family to pay the way. As much as the Shelbys loved them, there was no extra cash to pay college tuition for a couple of kids they’d taken in from social services. When Clay and Logan weren’t practicing or competing, they’d hit the books with uncharacteristic teenage zeal.

Hiding his desires within the freedom of college life had been a little harder. By sophomore year, he’d been ready for a change. If it had been as simple as just coming out of the closet, he would have told Logan. However, life is never simple, and while his dick would twitch at the hot guys in the classes or at the gym, his heart only beat for one man. Logan.

He was in love with his foster brother, and Clay knew with Logan’s history that his love would never be returned. Now, Clay’s body inhabited his cramped office, but his mind drifted through time back to that night at the end of their spring semester sophomore year…

I loved this book! I can't wait for the next one!

...a tender and heartwarming look at the renewed relationship of two men reunited after years of separation...It was also obvious she'd done her research...I appreciated the details and how they...

Share what you thought about Capturing Perfection and earn reward points.

Other books in the Perfect Love seriesView Series Page