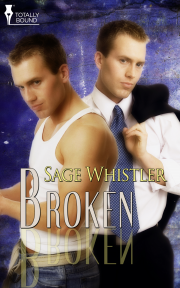 Sometimes bravery and love are one and the same.

Gabriel and Tristan Stalling parted ways seven years ago when their father kicked Gabriel out of the house for being gay. The years that passed were hard on both brothers. Tristan was left with his guilt and shame for not sticking up for his twin, the relentless need to please their parents, and the gnawing ache for his other half.

Gabriel manages to make his dreams of becoming a rockstar come true, but with his fame comes drugs and meaningless sex as he tries to drown out the hurt he feels when Tristan abandoned him.

As fate would have it, the Stalling twins are about to get one last chance to make things right. Both Gabriel and Tristan will be tested as never before. Not only will they have to make a choice between giving in to a love so taboo it can never be revealed or spending their lives forever broken, but they will also have to face the ghosts of their past, even the ones with the power to destroy them.

Reader Advisory: This book contains a twincest storyline, sexual intimacy between twins, and may be offensive to some readers. This is a

“Those things will kill you,” Marilyn Struthers said, plopping down on the bench beside Gabriel Stalling. Jumping guiltily, Gabriel hastily tucked his pack of cigarettes back into his coat pocket. As bad as he wanted a smoke to calm his nerves, he knew there was no chance of that at the airport. His blue gaze flickered from Marilyn who slouched on the bench reading the latest issue of Daily Starz to the arrival gate where he waited for Tristan to walk through. Tristan, his twin brother, a man he hadn’t seen in seven years, was finally coming to see him. His stomach twisted in anxious knots. He wondered how Tristan would react to him. Would their meeting be awkward and strained? Would the conservative brother he remembered turn up his nose at Gabriel’s long hair, multiple piercings and tats?

“Oh, look at this!” Marilyn exclaimed. An amused grin tilted her bare lips. Like Gabriel, Marilyn had gone to special lengths to blend in with the regular crowd. Her usual makeup and gothic style were tamed. With her face devoid of makeup and her fiery curls corralled under a blue baseball cap, Marilyn’s image was unlike her stage persona. She was just another citizen at the busy terminal in L.A. She turned and showed Gabriel the pages of her magazine.

“Kane already has a big head.” She laughed.

Daily Starz featured a picture of their guitarist, Kane Golden, a six foot three, ebony statue of a man with pale blond dreadlocks. Kane was hard to miss with his striking appearance, and it seemed as if the paparazzi had easily found him. The blown-up photo was of Kane leaving a club with two women on his arm—one of which was up and coming actress/model Sylvia Valentine. The caption read like the Twix commercial: Two for me. None for you.

Gabriel couldn’t help but chuckle at the playboy. Sylvia’s career would probably skyrocket because of her link to Kane. Over the past two years, Kane had gained the reputation of a star maker. The media just couldn’t get enough of him, and their band’s guitarist was at home in front of the camera. Unlike most members of Thrice , Kane didn’t go out of his way to avoid the paparazzi, and all the band members were happy to let the playboy take centre stage.

Gabriel was leaning over to share a word with Marilyn and get a better look at the writing below the photo when his cell phone vibrated. He unhooked it from his belt and flipped it open. “Hello?”

“Are you sure you don’t want me over there, Gabe? The airport’s getting pretty busy.”

“No, we’re fine, Brogan.” His eyes scanned the mass of moving people and restaurants dotting the airport lobby. “Where are you?”

Gabriel instantly turned his attention to Starbucks and found his bodyguard, Brogan Hewitt, perched at one of the tiny tables, stirring a drink in a brown coffee cup. The big man looked like a giant at a kiddie table. Gabriel laughed. “Take a walk, big guy. Stretch your legs. Mary and I will be—”

Two young men with deeply tanned complexions and the look of surfer boys about them stopped before the bench and peered at Gabriel. Gabriel tugged the bill of his baseball cap down over his eyes, but it was too late. He’d already been outted. The boys grinned, and hurried over. One even produced a marker from his back pocket.

“Oh, man, Gabriel Stalling!” He spoke loud enough to make Gabriel wince. Other pedestrians started to shoot curious looks in their direction. “We’d be honoured to get your autograph.”

“I’ll be there in a minute, boss,” Brogan grunted, obviously spotting the two young men. The line went dead in Gabriel’s ear, and he snapped his phone closed. Beside him, Marilyn groaned and slapped her magazine down on the bench.

Marilyn pasted on a smile, prepared to play the part of gracious rock star.

Gabriel nodded, eager to sign and exchange pleasantries so that the curious stares would go away. The last thing he needed was a mob. He appreciated his fans, and he loved making music, but the mobs and stalkers he could do without. Sometimes he just wanted to be normal. That’s why he had waived Brogan’s suggestion that they come to the airport with a full escort of bodyguards. He’d insisted that they could blend in with the crowd. The turn of events ensured that Gabriel would never hear the end of it from Brogan.

Their bodyguard managed to appear at Gabriel’s side only seconds before a small crowd began to gather, whispering excitedly about the two stars. Sighing at the buzz going through the crowd, Gabriel didn’t protest as Brogan took out his phone and demanded airport security. Gabriel finished signing the T-shirts of the two surfer boys before turning his attention to more eager fans.

The two rock stars continued to sign until airport security showed up to put a barrier between them and the crowd. Camera flashes went off as Brogan escorted them away from their bench. A few exchanged words with security got them past the restricted glass doors and into the quiet interior just beyond the arrival ramp. It was there that they waited until Tristan’s flight was called.

Wiping his sweaty palms on his jeans, Gabriel straightened from the wall he’d been leaning against and eagerly searched the flood of people for his brother. His heart gave a stuttering beat as he spotted Tristan. Clad in a black suit and tie, his brother looked exactly like what he was: a classier version of Gabriel. His blond locks were cut short in comparison to Gabriel’s shoulder-length hair. He was ringless, clean shaven and impeccably dressed. They’d filled out about the same. Both men were lanky and tall, with broad shoulders and a tiny cleft in the chin. Gabriel thought his brother might have him by a few pounds, but none of it was excess fat.

Tristan spotted him, and a slow grin spread across his face. He nodded, changing direction as he made progress to Gabriel’s side.

“Damn, I didn’t think you could get more gorgeous, Gorgeous,” Marilyn said, speaking to him but staring at Tristan.

Gabriel laughed, but inside, his heart was pounding a mile a minute. My brother. My torment. In L.A. With me.

Sage Whistler was born in North Carolina but spent the better part of her life in Connecticut. She was born the second of two daughters in the freezing cold one dreary January morning. Sage still thinks that being the first month of the year someone could have picked a birthstone color much lovelier than garnet.

Before Sage knew how to write she was making up stories, reading to her grandparents from a magazine, using words that weren't actually printed in the book. In her later years she began reading and writing romance, but her evolution to erotica happened virtually overnight.

One day she was reading a sedate romance and then she stumbled upon an erotica book and it was all she wrote. Pleading guilty to a flirty mind, Sage hopped from the mainstream to swim up creek with the bad boys and started writing gay fiction almost two years ago. She's been hooked ever since.

Sage readily admits to being a bit quirky, prone to doing things like blurting out random lines from one of her favourite movies. Her favourite time to weave stories is late at night when the world seems to be asleep, and one of her personal goals is to write the kinds of stories that shock, thrill, and delight her readers.

Broken by Sage Whistler is not for the faint of heart. This story deals with incest and a different kind of love not all readers might be comfortable reading. I found Gabriel's and Tristan's...

This book was wonderful and touching. You get sucked into the story and I could not put it down. It was very well written and so very hot. Really...really...hot. I sincerely hope Sage writes another...

Share what you thought about Broken and earn reward points.