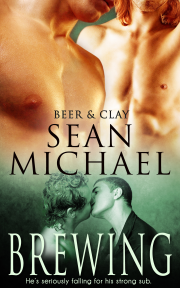 Book 4 in the Beer and Clay series

As the love between Toby and Damon deepens, the man intent on destroying their happiness increases his efforts.

Toby and Damon are back in Brewing, their relationship deepening more despite the continuing efforts of a stranger to bring them down.

Helping in their efforts are their best friends Peter and Christian. Peter’s new investment in a three-story building on the same block as Damon’s bar offers Toby the opportunity of having a studio close to home. It also gives Peter and Christian a home they’ve made together, which Peter hopes will bring them closer together.

A former soldier, Christian has a hard time letting go and finding his subspace. It’s going to take a lot to break the conditioning he’s learned in the Army. Peter is stubborn, though, and he’s seriously falling for his strong sub.

Will yet another attack bring down two couples this time?

Peter watched the sign go up for Chip and Drip, a little thrill going through him. He turned to his clipboard with its massive to do list and checked off the second to last item. All that was left with his walk-through and he and Christian had an appointment with their contractor in ten minutes to do exactly that.

He shook hands with Dave and Brian. “Thanks, guys. That looks great.”

“I hope you’re as pleased with the rest of the work.” Dave took off his hat and wiped his brow, before putting it back on again.

“I bet I am.” As far as Peter could see, everything had been done professionally and more than competently.

He checked his watch and looked up the street for Christian. His boy should be arriving at any moment. He caught sight of his stunning, studly lover, his reluctant submissive. His soldier. He felt his heart beat faster as it always did when he first saw Christian, and a smile pulled at his lips.

Christian looked up from his phone, smiled at him, and sped up. Looked like his boy was eager to see him too. He opened his arms for a hug and to pull Christian close, despite the fact they were in public. His boy needed to get used to such things.

Christian stiffened, but only for a moment, then his boy hugged him back.

“Good boy,” he whispered for Christian’s ears only. Then he stepped back and nodded to the sign. “What do you think?”

Christian looked up, head tilting. He pondered it for a long moment, long enough that Peter started to worry, then he nodded, a smile blooming. “It’s perfect.”

“Oh good.” Peter chuckled at himself at the relief that flooded through him. He hadn’t realized just how much he needed Christian to like the sign. Hell, the whole place. He was doing this for his boy.

“I can’t believe we’re doing it. That it’s a real thing.”

“It’s a great investment. Between giving us somewhere to live, a place to earn a living and a little extra income from our second floor renter, we’re coming out ahead.” He put his hand on Christian’s back. “Sam’s waiting for us in the lobby to show us everything they’ve done.”

“I have my camera.” Christian’s bright blue eyes were lit up and shining.

“Going to document everything?” At Christian’s nod, he pointed at the sign again. “You want to start with that or end with it?”

“Let’s start with it. It’s an auspicious beginning.”

“That’s a great word. Auspicious.” Smiling he waited for Christian to do his thing with the camera.

Christian shot the sign, then they headed in, together.

Sam was a stud of a woman, all flannel and muscles with long blonde hair that she usually kept in a ponytail with a bright pink hard hat.

“Hey, Sam.” Christian grinned at her. “You pleased with the job?”

“I’ll let you know as soon as you tell me what you think. I’m not happy until my clients are happy.”

She led them in, and the place was a far cry from the run-down storefront the building had boasted when he’d bought it. It was now warm and homey, tables surrounded by a variety of chairs, all padded, all inviting.

Christian’s fingers trailed over the tables, his boy so sensual, so tactile.

The counter had a cash register on it, and there were a couple of glass covered showcases. The kitchen was tiny, a large open rectangular window separating it from the cash area. It would be easy for Christian to work on stuff in there and keep an eye on the place at the same time, make sure he wasn’t ignoring anyone at the cash register.

She led them to the back where they had cold storage, prep space. It felt like what his Christian had asked for—clean and easy, simple and straight-forward. “I just want a place to grab a coffee, a sandwich or a cookie. Just easy and no big deal.” That’s what this was.

“What do you think, boy?” Peter, frankly, thought it was perfect.

She beamed at Christian. “With a double shot of espresso.”

Peter chuckled. “You’ll have to put it on the menu as ‘The Contractor’.”

“You know it.” Christian smiled at Sam. “Almond milk latte with an extra shot.”

“All right!” Sam gave a fist pump. “Okay, you want to see the rest of the place?”

“Absolutely. Especially the third floor.” Not that he didn’t care how the studio looked, but the top floor was going to be their home.

Christian took pictures of everything. The stairs, the hall—everything.

The studio was simple—open and clean, with a metric fuck ton of industrial shelving, sinks with heavy-duty drainage and a killer sound system. It had its own bathroom and a small area walled off with the world’s tiniest kitchenette and room enough for a couch.

Christian was closer to Toby than he was, so Peter figured his boy was a better judge.

“I do. I really do. He’s already ordering supplies. The clay should be here tomorrow.”

“Sounds like he’s even more eager than we are to get this place up and running.” He thought Toby was going a little stir-crazy, really. Though he knew damn well Damon was keeping Toby hopping in the bedroom. Toby needed the sculpting, though. All the way to the bones. Even he could see that.

This book is a very steamy story with emotional highs and lows that drag you along with the characters. To top it all off you have the scenes they have between each couple that practically leapt off...

Share what you thought about Brewing and earn reward points.