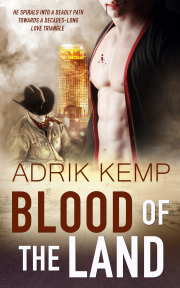 Blood of the Land

When an ancient Italian vampire travels to the pioneering Australian outback, what he finds there triggers a decades-long love triangle from which there is no escape.

Mack, a young Australian cattle farmer, makes his living on his father’s cattle station. The work is hard and the days are long but he is content with the life he has been born into. Unfortunately for his family, he is awakened to forbidden desires of the flesh by intriguing visitors from far-off Italy. When these visitors reveal themselves as lustful creatures of the night, Mack bites off more than he can chew and finds himself in a predicament he is ill-equipped to handle. Lost and seemingly alone, he spirals into a deadly path toward a decades-long love triangle between himself, the monster who made him and the love of his undead life.

Reader Advisory: This book contains scenes of violence and death.

Publisher's Note: This book is the prequel to Blood of the City by Adrik Kemp.

The old cattle station glowed at dawn. The sun scattered orange-rimmed silhouettes of trees, scrub and fence palings across the landscape—green covered distant hills, mist drying as the day brightened. Dew dripped from the edges of long, yellowing strands of grass, capturing sparkling moments in the sun’s birth. The new world was a far cry from the soot-covered brick and endless, uneven cobblestones of England. It had seen just over a century of European colonization that showed no signs of abating in the near future. In the cities and across the world, the impending turn of the century promised a twentieth where dreams might come true. But on mornings such as this, with buttercream sunlight spotting the new pastures and frost glittering over the grass, the hustle and bustle of the cities seemed a very distant dream.

Allen watched color come into the world from the edge of the balcony that surrounded his home. The wooden slats of the house were painted white to reflect the heat, and dotted around the edges were the starts of small rose bushes, poised to take over the building with a little love and attention. Corrugated tin covered the one and a half stories into which Allen hoped to grow a large family. For the moment, though, he sipped tea from a battered ceramic cup and smoked a hand-rolled cigarette, puffing the greenish-blue smoke into the sky.

“Are you outside, my love?” Evelyn’s voice broke Allen from his ruminations. He turned to see her carrying their breakfast plates and cutlery out to the water pump to wash them. Clad in a long, white dress, cinched at the waist and edged with dirty frills, she cut a hard-working figure against the rising sun. As always, her brunette hair was strung up on top of her head, oily strands slipping across her forehead and over her ears.

Allen nodded his reply, took one last drag of his cigarette and swig of his tea and handed her the cup. She placed it on her pile of dishes. He leaned over and kissed her on the forehead, smelling and tasting the sweat and oil on her skin. She smiled and blushed, looking inside with a coy glance.

“And what of it? You’re my wife. And our son’s a grown man. He needs to know how to treat a woman right.”

Evelyn blushed and pulled away, taking her clattering pail of crockery with her down the rickety wooden stairs. She tramped over gravel and grass to the pump at the side of the house. “He’s a good boy,” she said over her shoulder. “He’ll make a girl very happy one day.”

“Yes he will, ma’am.” Allen picked up his wide-brimmed hat, slipped it on his head and gave it a genteel tip to his wife. “See you tonight.”

“Yes, dear,” she said before she vanished behind the house.

Allen looked inside a moment before calling out, “Mack? Come ‘ere, son.” He brushed off his beige shirt, dirty from the previous day’s work and not due for a wash for at least another day or two. He tucked it into his trousers and under his belt and shuffled his feet into his worn leather boots. He heard his son appear before he saw him, similar boots clapping on the wooden deck.

Allen squinted at his son. Mack looked like a younger, more strapping version of him. They shared the same dark hair and complexion, a brooding brow and thick eyebrows overshadowing dark eyes. But Mack had the bone structure of his mother, high cheekbones and solid jaw, different from Allen’s slim face and leathered cheeks. Nonetheless, in the right light, with his wide-brimmed hat overshadowing his face, Mack looked just like Allen.

“See out there?” Allen pointed in the direction of the cattle run, past the stable, the three horses they managed to keep alive and healthy and over the endless plains of green and yellow foliage, becoming ever brighter by the moment.

“This new land of ours. It’s beautiful.”

“I suppose not. You’re a true-born Australian, through and through.”

“Which makes you what? False?”

Allen raised an eyebrow. “Maybe. I remember things you’ve never even dreamed of. I tell you often of the vast ocean, the smell of salt and rotting seaweed in the air. I tell you of snow falling from the sky. The coldest weather you’ll ever know.”

“Yes, you tell me about it all the time—almost every morning. And I tell you it can’t be all that different. An ocean is a big lake. A river that reaches everywhere you can see. And a beach is like the beaches here but glowing golden like the sun at dusk. I know you came here long ago on a boat bound for a new land, but I’ve never known anything but here. And I never want to.” 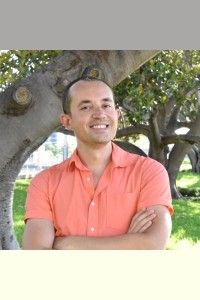 Adrik Kemp is a bent Australian writer with a vested interest in LGBTIQ+ culture. He is proud to be an active part of the community. He also writes genre short stories, usually with an LGBTIQ+ perspective. Adrik's short stories have been published all over the world and you can find them on his website. He identifies as gay but doesn’t mind being called queer, and happily lives in Sydney with his husband, singer Carl De Villa.

Share what you thought about Blood of the Land and earn reward points.