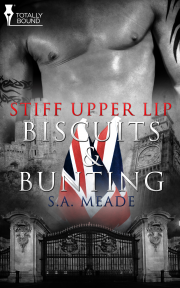 Keiran cooks up a storm for the village Diamond Jubilee celebrations, but he's not ready for the turbulence caused by the new 'lord of the manor'.

Kieran Lawson really wasn't all that crazy about being co-opted onto the village Diamond Jubilee Organising Committee but he has a catering business to run and he needs all the opportunities he can get.

When Committee business brings him to Neil Hamlyn's doorstep, he decides that getting involved with the celebrations isn't going to be quite the ordeal he thought it would be.

How long will it be before business turns to pleasure and what on earth will the villagers think, especially when Neil's ex turns up to throw a spanner in the works?

The first hurdle was the huge pair of wrought-iron gates, guarded by an intercom screwed into one of the stone pillars. I pressed the button and waited, trying not to stare at the security camera parked on top of the other pillar. I did think about tugging my forelock.

I glanced at the camera. "I'd like to see Mr Hamlyn, if that's possible."

"Can I ask what it's in connection with?" The voice, distorted by static, was machine-like in its neutrality.

"I'm here to talk about the Diamond Jubilee celebrations next year. I know it's a bit early, but the Organising Committee sent Mr Hamlyn a letter. As we haven't heard anything, I decided to pay a call on Mr Hamlyn. If that's all right. I also brought a welcome basket." I held the basket out for inspection, not that the camera probably picked up all that much.

There was a brief pause. I watched a blackbird hop across the drive while I waited. The basket was getting heavy.

Share what you thought about Biscuits and Bunting and earn reward points.