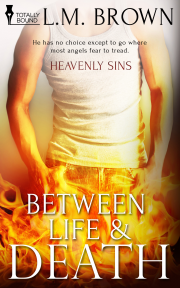 With one of his lovers imprisoned in the Underworld, Mac has no choice except to go where most angels fear to tread.

Alastor is still unsure about his position in the relationship following recent revelations, but he cannot walk away when he is the only real link between his two lovers. Splitting his time between Mac and Tristan, he hopes they can soon find a way to reunite the two men in his life.

As time moves on, Alastor realizes he is struggling to satisfy Tristan’s thirst for sex. His lover needs more than he can give him and craves Mac in his bed.

Mac still believes he can complete his mission to save his two lovers, but with one of them out of his reach, it is going to be far from easy.

During their time together they have made plenty of enemies, including one who would seek to separate them forever, even if it means biding his time until Alastor and Tristan are at their most vulnerable, when even the love of an angel can’t save them.

In the exact center of the entire Underworld the throne room of the king of all demons could be found. Easy to find from any direction, the audience chamber drew demons in like moths to a flame. Escaping the large cavern was another matter entirely. For many demons—particularly those who had incurred the wrath of the Demon King—the only way out was via flames that shot out from the cracks of the floor, sucking the miscreant down into the torture chambers, known as The Pit.

For one demon, there was no way to leave the Underworld at all.

At the back of the throne, hidden behind a stone wall, the chambers of the Demon King were located.

Tristan’s new quarters were not at all what he’d expected. Luxurious and well lit, they were nothing like the rest of the Underworld. He had expected to find a dingy and dirty cave, something similar to the catacombs he had stayed in with Alastor not so long ago. Instead, the chamber seemed more like a swanky hotel room, though one without windows. The wall sconces were not naked flames as he had seen throughout the Underworld. Instead they appeared to be electric, although he could see no obvious light switches on the walls. Tristan cringed at the brightness of the nearest of the lamps and as soon as the thought formed in his mind, the light dimmed to a more bearable level.

Thick rugs covered most of the highly polished marble floor.

Every item of furniture seemed to be modern and expensive. The glass coffee table held current magazines and newspapers, including the ones Tristan liked to read on a regular basis. The bookshelves showcased his favorite books, all of which were in mint condition.

A bowl of fruit sat on an end table and even from a distance, Tristan could see the bowl was made of silver. He sighed and shook his head.

All the luxury in the world made no difference to the fact he had been imprisoned.

How had he gone from a regular human with a job and a life to king of the Underworld?

The bed, large enough to accommodate him and his lovers with ease, looked comfortable and tempting. Like his bed at the penthouse flat he shared with Mac and Alastor, the headboard comprised of iron bars, perfect for holding onto while being taken by one of his men. Tristan wanted to take a torch to the sheets and set the whole thing alight. Had the sconces been actual flames, he may have done just that.

“Your quarters really aren’t so bad.”

Tristan spun round at the sound of his jailer’s voice.

“You think I want to sleep in the bed of the monster who put me here?”

“This bed wasn’t his,” Lucifer replied. He walked to the object in question and ran his hand lovingly over the surface. “This room is new and created by your own subconscious mind.”

Lucifer smiled and pointed to the bookshelf at the far side of the room. “Take a look and tell me what you see there.”

Tristan shrugged. He had already seen the shelves. “They contain my favorite books. So what? I’m still your prisoner.”

Lucifer ignored his comment. “I must say…this room is a vast improvement on your predecessor’s quarters. He had no taste at all. Did you know the candle holders he used had been made from human skulls?”

“There’s no need to be rude,” Lucifer chided. “I’m merely making conversation and paying you a compliment on your superior taste in decorating.”

“What are you doing here?” Tristan asked impatiently. “I thought you intended to give me time to celebrate my new status with Alastor?”

“And were he here with you, I’d leave my visit until later, but you haven’t bothered to summon him, have you? Instead, you’re wallowing in self-pity in a manner unbecoming of the new king.”

“Are you avoiding my question?” Tristan snapped. “Why are you here?”

“Idle curiosity as to what makes our new king tick,” Lucifer replied. “This room only generated when you crossed the threshold, so I couldn’t snoop earlier.”

“Yes. I make no apologies for my actions. If you don’t like my being here, tough luck.”

“I can be extremely charming when the occasion warrants it,” Lucifer purred as he continued to poke around the room, checking cupboards and alcoves as he did. “My lover has always said my smooth tongue and way with words are my greatest talents. After all, I am the First Demon, and were I not so tempting, I would be the only one.”

Tristan crossed his arms and waited for Lucifer to finish wandering.

“Ah, yes, I think you’ll settle in here quite well.”

Lucifer gave him an annoyed look. “You can sulk, complain and rage until hell freezes over, it makes no difference.”

Lucifer chuckled. “Oh, I suspect the heat will be rising in here before too much longer.”

“The Underworld will be opening again soon, which means regardless of whether you summon him or not, Alastor will be running down here in search of his missing ‘baby’. I suspect it will only be a matter of time before he’s in here helping you to break in your new bed.”

Tristan sighed. “I think we have a lot of talking to do before we jump into bed again.”

“You’re an incubus. You’ll be fucking him through the mattress before the end of the week.”

Tristan didn’t see the point of arguing with Lucifer. If he and Alastor did manage to sort through their problems, it would have nothing to do with the demon standing before him.

Lucifer continued to poke around the room while Tristan did his best to ignore him. Eventually he stepped into the path of the demon and glared at him. “Are you done?”

“You really shouldn’t be so rude to me,” Lucifer chided. “I’m here to help you.”

“Help me?” Tristan shook his head and rolled his eyes. “Help me, he says.”

“Who else is suitably qualified to guide you through your first days as our new king?”

“What makes you think I need your help?”

Lucifer smiled, clearly unfazed by Tristan’s attitude. “Even now the throne room is filling up with the leaders of each of the factions of demons, all here to bow down before you and swear their loyalty.”

“Well, most of them will probably want to kill you and take your place, if truth be told, but they generally wait until after the banquet is over.”

Tristan dropped into one of the soft leather chairs. “This is going to be a disaster.”

“Not if you let me guide you.”

“Why are you so keen to help me? What difference does it make to you who’s king?”

“I don’t care who sits on the throne, but I do like to ensure our new kings are settled in as soon as possible. That way I can turn my attention back to more pleasurable activities.”

Tristan cast a glance toward the wall where the entrance to his rooms had been. “How do I even get out into the throne room again?”

“Just walk toward the entrance and imagine the doorway opening for you.”

Tristan took a step forward and the entrance began to form. The most powerful demons in the Underworld congregated just on the other side of the wall. Shit!

“Wait a moment,” Lucifer called. “You aren’t ready to go out there yet.”

Tristan looked down and groaned when he realized what Lucifer meant. He couldn’t go out there in his human form. Reluctantly he took on his golden demon persona.

“You should be wearing something more appropriate than that dirty tunic too,” Lucifer advised. With a snap of his fingers, the tunic transformed into a silken black one with gold braiding. Tristan hated the garment on principle.

“We’ll be invisible when we first go out there,” Lucifer said. “You’ll appear before the crowd when you sit down on the throne.”

“Because that’s how it’s done. I’ll remain at your side, invisible to all others. I’ll speak to you only in your mind and tell you what you need to know.”

“I’m glad you think so, because you’ll need me there.”

Without any further ado, Lucifer swept past Tristan and out through the entrance. Tristan dawdled after him with a sigh of annoyance.

The throne room appeared packed to the brim with demons, many of them jostling their way to the front of the room. Some openly fought with others, while still more watched the displays of aggression. Tristan could tell instinctively which demons fed on the hatred and which merely looked on in idle interest. He had a feeling this might be one of his new powers, though he didn’t bother to ask Lucifer to confirm his suspicion.

Share what you thought about Between Life & Death PRINT and earn reward points.