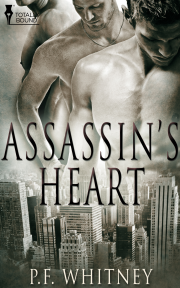 When an assassin is paid to kill someone, the worst thing that can happen is falling for the target.When Rhys Metzger heads to work at his best friend's family fish market, he has no idea his day will end anything except ordinary. Catching one of his co-workers in a less than flattering situation with a young man who has come to steal some ice, Rhys finds himself confronted with having to save himself and the young man from the other's wrath. Killing his friend's cousin, Rhys flees the market with the young man, in search of someone who can help him lie low until the whole thing blows over. Enter Evan, a man who leads a life far beyond anything Rhys has ever thought he would be involved in.

Drawn into a world of secrecy and murder for hire, Rhys finds himself falling for the target of a contract, mobster Declan Garrett. The more time Rhys spends with Declan, the more he finds the man isn't the evil killer portrayed in the newspapers. The man he grows to know has a heart and truly cares what happens to those he employs.

Torn between his love for Evan and his growing attraction for Declan, Rhys finds himself in a situation that will lead to death—but will it be his or Declan's? Should he fulfil the contract and spend the rest of his days with Evan, or let Declan live and face the consequences of not keeping his end of the bargain. Either way, all will be decided with a single gunshot.

Reader Advisory: This book contains some scenes of violence and rape which some readers may find disturbing.

Share what you thought about Assassin's Heart and earn reward points.