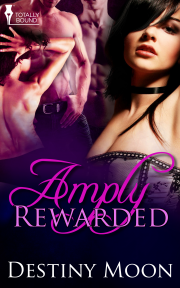 She can have any man or woman she pleases, but what about her own husband?

When Julie's first beau proposes marriage at a young age, she knows she needs to set out on her own to discover what life has to offer.

She finds companionship and financial stability when she meets a madame, her first big-city friend. It doesn't take long for her to realise she possesses a kinky mind and is capable of bringing even the toughest man to his knees.

One day she meets a kindred spirit, a man as kinky as she is who offers her a new life. He isn't after her sexually, as he is more interested in men, but he is amused by her and they genuinely connect. She helps him to realise his fantasies with men. She marries him for money. He marries her for appearances, especially where his benefactor is concerned.

To the outside world, they appear glitzy and collected but, behind their glamorous veneers, each one embarks on their own sexual adventure.

As the intimacy of sharing their fantasy lives with each other strengthens and grows, Julie begins to desire her own husband more and more. Because she believes she cannot have him, she yearns for him in ways that haunt her and take over her fantasies.

Romance heroines have saved my sanity numerous times through break-ups and life changes. I find escaping into a romance both soothing and revitalizing—and even better when there are some steamy scenes to tantalize the imagination.

For most of my adult life, I’ve concentrated on carving out a serious career, but a number of love-hungry, sassy characters keep taking over my mind, insisting that I daydream, live vicariously through them and tell their stories. Watching these women emerge on the page gives me a different sort of satisfaction than I get from my day job. It is a joy to share them with readers.

I live in a tiny apartment in a crowded city and I like to think there is something romantic about this. I did manage to find my soul mate here.

Share what you thought about Amply Rewarded PRINT and earn reward points.