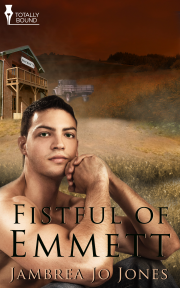 A Fistful of Emmett AUDIO

Emmett Longley just lost his job and home. When he hears of a ranch needing a jack of all trades, he jumps at the chance. What Emmett didn't expect was to find himself drooling over his new boss. And the man was giving off some weird vibes. Was Kit gay or not?

Christopher ‘Kit' Younger only looks at men to see if they fit the bill to work his ranch. He doesn't have time for relationships. He never has, and if he did, they would be with a woman. That was until Emmett Longley drove up to his ranch and applied for the job of foreman. Why was he getting hard over Emmett? There was nothing feminine about Emmett so why did Kit catch himself daydreaming about being in the big man's arms?

Share what you thought about A Fistful of Emmett AUDIO and earn reward points.