I’ve always been fascinated with spies. I credit Pierce Brosnan with this. Something about that brow, that smirk, that effortless 'Bond, James Bond' cool got into my head when I saw Tomorrow Never Dies (spoiler: tomorrow doesn’t die) and I’ve been reaping the rewards ever since.

About a year ago I wrote In The Presence of Mine Enemy, which the lovely folks at Totally Bound graciously published. It did pretty well, but Enemy is a fairly short title, kind of a read-in-one-sitting story with a plot contained to a single setting and narrow timeframe. As much as I loved grappling with the challenges of a 24-style countdown narrative,  for some time I’ve wanted to revisit the subject with a larger cast and a broader scope.

Enter Best Kept Lies, the first installment in my new six-part m/m book series, Shadow Play. If Enemy is a clock ticking down to an execution, then Lies is the ever-tightening noose. The story pits a Russian spy and a British agent in a race to turn or be turned against the motherland. But espionage only works as long as no one develops scruples—or emotional attachments.

As much as I love James Bond, the gadgets-and-high rolling lifestyle Fleming wrote always called for a great suspension of disbelief. Far from plausible, they also call into question the sensible. Surely no self-respecting spy would show up to an international mastermind’s house in a Lamborghini. Better to pose as the invisible, faceless help, the gardener with the silencer hidden in his overalls, or the cook with the vial of poison.

By and large, the heroes of Best Kept Lies, as well as their counterparts in the rest of the Shadow Play series are versions of the man on the Clapham omnibus—your Average Joe, if you prefer. Trained in the art of double-speak and intelligence gathering, they’re coldly competent and wholly committed to their task, whether that task involves extracting information via enhanced interrogation techniques or surviving a shootout in hostile territory. Some have a past they’re trying to outrun. Others simply wear the easily forgettable face of a lowly office stiff in order to escape detection.

But it wouldn’t be much of a story if they succeeded.

I think one of the reasons spies are so interesting to me is because the (double) lives they lead involve so much thought and planning. Yet all the planning in the world can’t account for human nature. And when highly trained, highly dangerous individuals decide to chart their own course independent of orders, it’s best not to stand in their way.

Every job has its job-specific terminology. CSI has me convinced that forensics, for instance, involves science-y talk about residue and fingerprints, best delivered under impossibly dim-yet-not indoor lighting, and I’ve mainlined enough ER to know that healthcare workers rattle off BP, CC, and other acronyms with rapid fire gusto.

With Best Kept Lies getting its full release this month, I’ve made a little list of spy slang I thought might be fun to share with you. I can’t attest to the frequency with which any of these are used in real life, but they certainly seem as popular in fiction as James Bond’s shaken-not-stirred martini. And what’s espionage without a clever vernacular?

We’ll start with my personal favourite…

If you’re a fan of Game of Thrones, you’ve seen Tyrion Lannister give three men three separate versions of the truth to find out which was leaking information to his sister the queen. Whichever piece of intelligence surfaced exposed the source of the leak. In spy parlance, that’s a canary trap.

Birdwatcher is another word for a British spy. Not to be confused with the lovely BBC presenters on the lovely (if drowsy) Autumnwatch.

Legend refers to a spy’s claimed identity. It can be supported by pocket litter or documents provided to them by a cobbler (see below).

Brush pass. Exactly what it says on the tin—brushing past someone to drop or collect physical intelligence. (Best done in trench coats, in a park, at dusk, with fedoras pulled low over the eyes.)

A ghoul is someone who searches obits or graveyards for names of the deceased, which can then be used for false identities. Also works for a brooding character in need of a mopish hobby!

Dead drop is another way of passing physical intelligence back and forth. Unlike a brush pass, it doesn’t require the agents involved to ever come into contact, because it substitutes direct exchange with a secret location where information is left for the other party to retrieve. Excellent if you’re an antisocial spy, I suppose.

Dry clean. Paranoia is rife among spies, but sometimes it is warranted. To dry clean is to take action to ensure one is not under surveillance. Covering your ears and closing your eyes is unlikely to qualify as action, though it would be my choice.

Pocket litter. A spy looking to establish his or her cover should ensure their bona fides check out down to the contents of their pockets. Window dressing serves the same purpose and refers to including various information in a cover story or operation meant to prove its veracity. For instance, if I was going to pretend I was a spy, I’d carry a John le Carré novel on me at all times.

A cobbler is an agent whose job it is to forge documents to cement a false identity—and who obviously gets a better gig and a better job title than a ghoul. This is one piece of jargon that goes with shoe, which in this context refers to a false passport or visa, but which thanks to Snowpiercer I will forever associate with knowing your place. 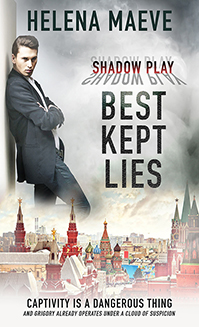 What becomes of the Russian spy who lands himself in the crosshairs of a rogue British agent?

Grigory Antipov’s work within the intelligence community is exemplary, but attracting too much attention is against his interests as a spy—a lesson painfully learned the night he is abducted off the streets of Rome. Captivity is a dangerous thing and Grigory already operates under a cloud of suspicion given his predilection for male company. Luckily, his stint in British custody is short-lived, a mere flex of muscle from Agent Karim Awad.

Karim’s objective is obvious. Lure Grigory into Section’s clutches and turn him against his own people. Expose him to the wrath of Moscow if he refuses. His mission brief may not specify the methods to be used, but Grigory soon discovers that Karim is a man of many talents. With powerful interests at play and the threat of deadly force in the air, Grigory faces an impossible choice—surrender to his fate or sacrifice the only man whose touch makes him feel alive after so many years.