LM Somerton takes us to the heat of southern Arizona in her motorcycle club series, The Wyverns. Deathtrap surrounds the explosive connection between D/s lovers Rogue and Orlando de la Pena, and their fight to keep their relationship a priority when The Wyverns club becomes under siege. Rogue sets out to make sure that his beloved sub, and The Wyverns club, remain safe.

Here’s what Senior Editor Sarah has to say about Deathtrap: 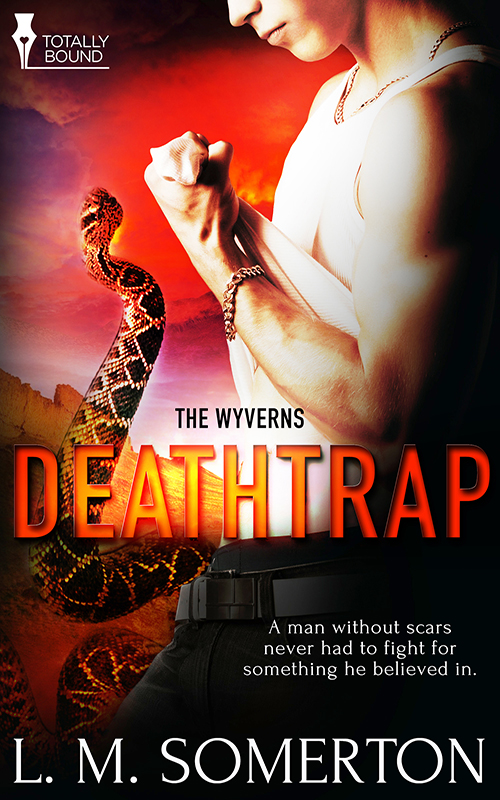 “What I love most about L.M. Somerton is her ability to write characters who are so relatable you can’t help but instantly fall in love with them. Even the people in the hardened gang of The Wyverns have unique traits that put a spotlight on their softer centers. Since you will have already found a place in your heart for the characters in book one, Mantrap, the events that occur in Deathtrap are sure to keep you gripped like nothing else. I guarantee you won’t be able to put this one down. Rogue is the perfect Dom—rough around the edges, domineering and yet intuitive and caring of Orlando’s every need. Orlando is such a likable character, you’ll be right there with him every single step of the way. And what incredible steps there are to be taken on this journey!”

Blurb for The Wyverns Series

With a reputation akin to a nest of pit vipers with attitude, The Wyverns raise hell and leave chaos in their wake. Forced together because the alternatives are worse, they form the ultimate dysfunctional family. But how did this bunch of badass bikers end up baking in the arid heat of southern Arizona?

Never judge a book by its cover and never judge a biker by the patches on his leathers. Behind the intimidating façade, The Wyverns are organised, intelligent and committed to relieving the cartels of their wealth. Ejected from various branches of law enforcement and the military, they share a healthy disregard for authority and a collective appreciation of the male anatomy. They also have the skills to make crime pay—talents recognised by the shady, manipulative bastard called Trap who pulls their strings from behind the scenes.