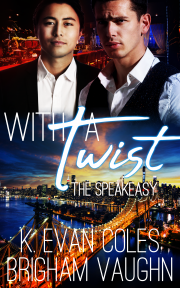 Customer & Industry Reviews of With a Twist

Share what you thought about With a Twist and earn reward points.

WOW! What a gripping, gritty, poignant, bittersweet, fantastic, and fascinating tale. It had me hooked from beginning to end.

This book is so satisfying; it's like meeting up with old friends and some new ones! Will Martin is a writer and a teacher at NYU whose Senator father shut him out when he found out Will was gay. When he's called to return to the family home on Long Island due to his father's failing health, he agrees, but not without some trepidation. While there, he becomes intrigued by David Mori, a Republican Senator who considers David's father his mentor. The story of how they grow from friends to lovers and more is remarkable and gratifying. The cast of friends and family will tug at any reader's heart and leave them wanting more. (I'm looking at you, Jesse Murtaugh.) All in all, With a Twist is an exceptional read, and is highly recommended.

What a great story about finding love during a rough point in your life and reconnecting with family whom you had been estranged from for years. Both situations were handled with loving care of the characters. We first met Will Martin in the “Tidal Series” books. When his lover, Riley, got back together with the love of his life, Carter, Will is left alone and broken-hearted. When he gets the news that his father is ill, he goes back to his Long Island home to the family who disowned him when he was outed. While there, he meets David Mori, his father’s mentee in the state senate. They don’t have the greatest first meeting as Will’s emotions get the better of him. I felt so bad for Will having to deal with his father’s anger and disappointment at a relatively young age. To be estranged from your parents for so long is sad. So, I was so pleased when Will and his father were able to find some common ground again and reconcile their differences. Too often, people never get that chance.

Vaughn & Cole bring to life a horribly mismatched couple that couldn't be more perfect for each other. Shows us that it takes time and sometimes time isn't always on our side, it might seem cliche but "making the most of the time we have" is an important lesson we all need to be reminded about. With a Twist is a heartbreaking tale of words we can't take back, regrets because we're too stubborn to step first, and time lost. But its also a heartwarming tale of reaching out, discovering new friends, and making up for lost time. Simply put, this is a remarkably entertaining read that will leave you completely enthralled from cover to cover. Truth is, I think that despite my feelings on Will's sacrifices, finding myself so sucked in to the story and not wanting to say goodbye to Will and David says more to the authors' talents than anything I can put into words.

I was so excited to read this book. I loved Will in the Wake series and was so excited to see where his story would go. K. Evan Coles and Brigham Vaughn have written a great story. What we learned about Will's story from the Wake series was so sad. He was estranged from his family and hadn't had much luck in love. In With a Twist, we get to learn about his family as he returns to his family home to help his mother and sister care for his father. Will learns a lot about himself and discovers his father may have changed since they last saw each other. While helping his family, Will is introduced to Senator David Mori. Though at first Will struggles with the difficulties of returning home, he befriends David who helps him come realize things and people can change. I love the relationship that develops between David and Will. This is a great story that had me feeling so many different emotions.

Needless to say, I was excited when I found out K. Evan and Brigham were starting another series with the secondary characters from the Tidal Series and I was not disappointed! The writing collaboration between K and Brigham flows perfectly from from one to the other. So much so, that when Will is in David’s “scenes” and vice versa you feel like it’s actually each of them writing side by side. I don’t feel like you have to read the Tidal series first but I would, because it will only enhance the storyline for you. So check it out!

What does a person do when the father he’s been estranged from is in dying and in need of help? In Will’s case, he begrudgingly uproots and goes back home. When there, Will discovers that the man his father has been mentoring, David, is gay. David is also the kind of man Will could fall for – despite their difference in politics. With A Twist is an emotional story, as opposed to a physically dramatic one. In the opening chapters, Will isn’t in a good place which is reflected in his mood, that frequently swings from friendly to angry. When Will and David find common ground, they become close. David also acts as a kind of mediator between Will and his father, Bill. Everyone Will meets seems to see Bill differently – they include, love, admiration, respect and hate. David helps Will process what he’s feeling and make the most of the time he has left with Bill. There are issues with David too, along with their deepening attachment read the full review at lovebytesreviews.com

This story was so smartly written. I was thoroughly impressed by the ability to cover so much in the way of politics and platforms and the prejudices that go along with them. I loved David's character. He had so much compassion and was so genuine and affirming. He brought so much to this story. Will's character had to grow on me. At first he seemed like a self-righteous brat, but he humbled himself and I really felt the connection between him and David. I loved the second chance that Will had with his father and the role that David played getting him there. Everything just flowed so well and the pacing kept me wanting more. I can't wait to read more of this series!