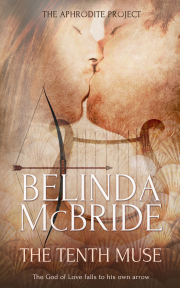 Share what you thought about The Tenth Muse and earn reward points.

Review by Hearts on Fire

This is a sexy modern version of Greek mythology.

AND... it was beyond, totally exceeded expectations.

Overall, a gifted interpretation that goes beyond the superficial to unveil the humanity in Greek deities.

Anybody who remembers studying the Greek Gods and Goddesses in English class knows they got up to a lot of hijinks; even in the sanitized versions approved for the classroom. This is the story of Eros (definitely not in the ‘chubby kid with a bow’ mode) and Rees, the scholarly and beautiful tenth muse who resides in the Elysian Fields – and it is unlikely to ever appear in a classroom.

Eros is on Earth hunting the reincarnation of his beloved Psyche who has become an A-list fashion model. In pursuit of her he does something spectacularly attention-getting by appearing on the runway of a huge fashion show - in drag and wearing his own wings. He gets her attention all right, and that of various irate gods and goddesses including his mother, Aphrodite.

Aphrodite persuades Rees to go to Earth and masquerade as human and eventually lure Eros back to Olympus. Rees agrees and finds himself liking, and more than liking Eros. As time passes the lies feel more and more like a betrayal, the love feels more and more real…

Like many of us, Eros had a dream, a shining vision he had been pursuing – the dream of Psyche. But the current incarnation, Rosalinda, is drug-addicted, not particularly nice, and in love with another man. The reality is nothing like his vision. And then there’s Rees, warm, charming, beautiful and human. Destined to die just like Psyche. Can he bear another love and loss? Eros is conflicted, extremely conflicted.

The focus of this book is the love story and it is simply beautifully done. There are other plot elements of course, Rees is kidnapped, there are complex relationships playing out among the Olympians, and twists on the traditional myths that we thought we knew. Incidentally, you don’t have to remember any of this stuff from high school – the author does a great job of dropping the necessary information into the story flow. But if you’re curious? That’s why they invented Google…

This is listed as book one of the Aphrodite Project. I’m sure we’ll be seeing some of the wonderful supporting characters moving to the fore in later books. I look forward to them!

I received a copy of The Tenth Muse from the publisher in return for an honest review. Young and beautiful Eros gets a little carried away in the human world and needs to be coaxed back home. Aphrodite sends handsome/geeky Reese, brother of the Muses, to do the job. When the "job" becomes a true romance between Rees and Eros, things start to get interesting, and romantic, and hot. The strength of this book is in the characters: Eros, Rees, Zephyrus, Herma, Wind Sprites, Shadow... The story is built on an awesome cast of interesting characters that left me wanting more. More Herma? More Zephyrus? Yes, please! The challenge this story presents is large number of tertiary characters, important to the world building but not critical to Rees and Eros' story. It was hard to keep track of all the names at one point. I can't wait for the next book in the series. With major world building done, I suspect the next story will be amazing!

There was a depth I was not expecting and this story surpassed all my expectations. I love when an author rises above and gives me a story I will gladly read time and again.

I will be revisiting this series when book two is released. I am so very interested in Herma’s story and can’t wait to see which other secondary characters will get a chance to shine.