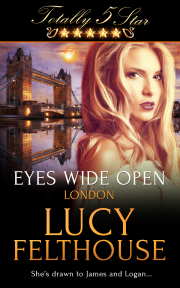 Share what you thought about Eyes Wide Open and earn reward points.

Wow! This is one super hot, squirm in your seat, be careful where you read it story. Fiona moved to London with a degree in creative writing, looking for the perfect job. Following up on a newspaper ad leads her to just that, at the exclusive Totally Five Stars hotel. Little did she know what else it would lead to. James and Logan are two very successful, very sexy businessmen who frequent the hotel often. Explosions ensue when the three hook up but is that all it is - a hook up? Hold on tight for sex scenes that set your heart racing and your mind whirling. M/M, M/F/M and BDSM is the order of the day here and it's sensational. Oh and if you're a Supernatural fan, one particular scene will have you grinning from ear to ear.

We have Fiona - a go getter, knows what she wants kinda girl. She lands a dream job at Totally Five Star hotel in Mayfair, London. We then have James and Logan, two stunningly gorgeous businessmen who frequent said hotel. Fiona gets to spend one fantastic night with them both - then after hearing nothing from them in almost a month gives up hope of ever seeing them again. During her one night with James & Logan they introduce Fiona to their BDSM lifestyle and this piques her interest. After some searching online Fiona finds herself at a Fetish night to find out more about the scene. Then she literally walks into the two people she did not ever expect to see again ...James and a rather annoyed looking Logan. Full of sexy adventures in a world class swanky hotel Lucy has left me wanting more from these three!

The hotel was a featured character in the book, something that I have come to enjoy about this series.  I enjoy the opulence and the fantasy of it all. I have read this author before so was pretty sure I would have a hot read on my hands.  I was not disappointed. *fanning self* Oh yes!  From the moment Fiona met James and Logan I knew there was going to be sparks.  Boy was there. If you are like me and prefer your travel from the comfort of your easy chair, you will enjoy this book.  A wonderful stay at a fantasy of a hotel with tours of a great city.  Throw in some hot ménage and kinky romance, a lovely glass of wine, and what a pleasant evening.  Come travel with me.

After a slow start this burns brighter and brighter – and does a good job of introducing some play into what was a one night deal. I enjoyed how she decided to give things a try – and cameos, like that from Divine, add a lot to the tale. I loved the description of the trip on the underground in her coat – when I travel by tube in the future, I will now definitely be wondering what people are wearing under their coats! It is a sexy read, which had a good build up.

I totally enjoyed the “english” style. No doubt the author knows London very well. So definitely a cherry on top! The most positive part is that I wanted to know the end. It is a memorable story.It is a very well written book with a plot I will remember.

Review by Romancing the Book

This really was a fun story with believable characters that were easy to relate to. Ms. Felthouse also described the rooms, area steps of the relationship, the whole sexual encounter in such a way that it was done tastefully. I wasn’t put off by any of it.  I enjoyed this very well written story of Fiona’s new adventures.

Review by The TBR Pile

Fiona soon finds herself the third party in an unholy trinity with the already-committed gay pair. Fiona gets more than an eyeful of London's thriving BDSM and fetish scene, and with the help of James and Logan decides that the view is fantastic! The story is plausible and follows a logical progression from Fiona's destitute-student status into her first 'real' job...yes, some people really do luck out on getting their dream job! Fiona herself is a logical person; I could relate to her rationalizing how she was going to go about investigating the seedier side of London and the research she did to prepare herself....hilarious!

Fiona is a character that I could really like.  She is a strong, independent woman who goes after what she believes she wants in life. Then you have the hunky set of Logan and James.  Yum.  They are a couple who is not afraid to ask for what they want and what they want is Fiona. I really liked the setting of this story- despite it being where Fiona worked, I felt that it was a good compromise and allowed the reader to see further inside Fiona's life. Overall, I enjoyed this story.

Fiona. Young, strong, and coming into the woman she wants to be. She’s real – you can relate to her and her struggle socially as well as economically as a newly graduated adult. Lucy Felthouse does a great job of putting us in scene with her characters – the sights, the sounds, the smells of London as well as the T5S come alive off the page and her novels are a treat to read! Her characters come alive with how the interact with each other and the result is a book that is fun and entertaining to read.