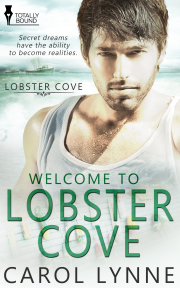 Share what you thought about Welcome to Lobster Cove and earn reward points.

I have read and enjoyed all of the books in the Cattle Valley series, but I especially like the concept of Lobster Cove. It still boggles my mind that Asa can afford to buy an entire town! I'm looking forward to reading about its development and meeting the new characters who will surely be coming and, hopefully, visiting with some of the Cattle Valley folks as well.

If you’re looking for a light read that’ll leave your heart warmed, Welcome to Lobster Cove is the one for you. As always, the sex scenes were awesome. I enjoyed their rough, need-you-now style encounters. Sizzling hot for sure.

I so think I’m going to love Lobster Cove and all of its residents! I love the idea of a town that is bought and in order to live there you must be GLBT tolerant, where do I sign up? This is the first book in a new series by Carol Lynne and I can tell it’s going to be a fast favorite for me. Entertaining and sexy, Welcome To Lobster Cove was a great start to a new series. I think there will be some fascinating stories coming down the line and I’m looking forward to them all.

The attraction between Boone and Dante is almost instant, but in this case Dante isn’t willing to jump into a permanent relationship immediately and I like that, no matter what his reasons. Both men have lots of baggage but it’s only a matter of time before Ms. Lynne gets them together in a way I could believe. I also like how Laddy’s always given such an important place in his brother’s life. Probably the best scenes in the story are those revolving around Laddy. Nicely done, Ms. Lynne. I found the read enjoyable, and easily finished it in an afternoon.

Review by Sexy for Review

Boone and Dante’s relationship went from zero to sixty in a few short pages with a bit of angst and hesitation on Dante’s part. I do believe that Ms. Lynne did a nice introduction to her new series—friendly characters, loving men and a safe haven.

Lobster Cove is the opposite of what I’ve come to expect from small towns in gay romance. Far from close-minded, this is a small town that is actually being built on acceptance, particularly for the LGBT community. It is lust at first sight for Dante and Boone who quickly act on their feelings and there is undeniable chemistry between the two men. Lobster Cove being what it is though, the two men can’t avoid each other, especially when the town needs to pull together to help when there is trouble. In addition to the MC’s, I liked both Laddy and Ava, Dante’s straight foster sister who moves to town with him and I felt all the characters were realistically portrayed. Overall I enjoyed this quick read and was intrigued by glimpses of what the future of the series may hold.

Carol Lynne must be the queen of feel-good series. While I enjoy stories about the West (her Cattle Valley series), as I live there after all, I really love New England, so this is a very winning start to a new series for me. In addition to telling the story of Boone and Dante, the book introduces us to characters who will star in future stories, I am sure. Boone and Dante are an interesting pair, both hurt in some way by their pasts. Boone, though, is looking beyond his past to his future, while Dante is hard pressed to let the defining incident in his past not predict his future. As with all Lynne books, the sex is hot, but never takes over the story of acceptance in a new location. A sweet quick read!

This is a sweet story of love can conquer all. There is a bit of insta love, which does fit this story to perfection. I love the new town, there is lots of promise of many more books to come in the future. First books in a new series are often more world building than anything else, I found this one much more. I liked the main characters as well as the sub characters. It also showed me how a small town will look out for every one and help those in need. Laddy stole my heart very early on in the book. I’m sure we will see lots more of him and his sweetness in many more books. Overall a great quick read with lots of hot steamy sex and a good fulfilling storyline...

Review by My Fiction Nook