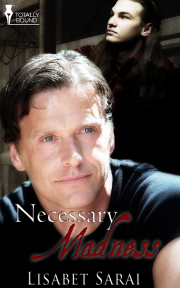 Power and love can both lead to madness.

Nineteen-year-old Kyle sees visions of disasters, visions that tear his world apart. Everyone assumes he is schizophrenic, but Rob, the cop who picks him up off the street, knows better. Rob's own experience has taught him that psychic powers are real, and potentially devastating. Since his telepathic sister's brutal murder, Rob wants nothing to do with 'gifted' individuals like Kyle. Yet he can't deny his attraction to the beautiful, tortured young man - an attraction that appears to be mutual.

When a brilliant, sadistic practitioner of the black arts lures Kyle into his clutches, Rob faces the possibility that once again he may lose the person he loves most to the forces of darkness.

First came the flames. Then, the screams. Each cry was distinct to Kyle’s ears—the men’s hoarse yells, the women’s shrieks, the inarticulate wails from the infants. He couldn’t see them, not yet. Sooty smoke billowed up, hiding the plummeting bodies, making his eyes sting. Orange tongues of fire pierced the black cloud. The cries grew louder as the heat intensified.

He took a big swig of cheap vodka. The bottle was already half empty. His head spun and he knew he couldn’t stand, but the awful screams still rang in his mind.

Please, he thought. No more. I can’t take any more. Let me pass out soon. He drank again, his gut churning as the raw liquid splashed into his empty stomach.

He tried to focus on the present—the rough stone pressing against his back, the chill wind biting through his ragged jacket, the faint smell of urine that filled the passageway under the highway. Useless. The sensations of the real world seemed thin and frail, powerless to overcome the horrible scenes in his head.

Every time, it got worse. It took more alcohol to remove him to that state of blissful oblivion. I’m adapting, just like any drunk. Before long, I’ll need a whole bottle to drown out the visions. Eventually, it will kill me. The thought was a relief.

The spells came more frequently these days, and not just during his waking hours. Nightmares stalked him, full of bloody flesh and torn limbs, searing fire or icy floods. He’d claw his way back to consciousness, howling like an animal, trying to escape. He’d been kicked out of every shelter in the city. He upset the other residents too much.

He could always go back to the hospital. Thorazine didn’t completely smother the visions, but it deadened the emotional impact. He could sit for hours, watching disasters play themselves out on the screen of his mind, and not care.

It worked for a while, but then he always ended up signing himself out again. As painful as consciousness was, it was better than the half-life of being drugged. At least, that was what he told himself, on the good days when his curse was in remission. The staff looked relieved when he left. Even the professionals had trouble dealing with his ‘hallucinations’.

“Hey, gimme a drink, will ya?” A voice cut through the screams echoing in his head. The grizzled man lying next to him on the sidewalk smelt like long-unwashed socks. “Come on, please? Us bums got to stick together.”

Kyle handed him the bottle. His hand shook. “Sure, help yourself.”

The old timer took a deep swallow, then grinned at him. “Thanks, kid.”

The flames flared up, hiding the man’s pock-marked face and gap-toothed smile. A woman’s cry rang out, full of terror. “No, please, no more...” Kyle muttered, closing his eyes. The hungry fire continued to dance behind his eyelids, mocking his attempt at escape. He groped for the bottle.

Brilliant white light flooded his vision, momentarily chasing the inner fire away. “Okay, boys, time to get up.” The masculine voice held a natural authority—strength without cruelty. “Off to the shelter with you. You know you can’t stay here, getting drunk and blocking pedestrians.” A firm hand grabbed his arm and tried to haul him to a standing position. “Come on. We’ve got a wagon right here. Wouldn’t you rather be in a nice warm bed than a stinking underpass?”

Kyle opened his eyes, blinking in the glare of the cop’s flashlight. “I...no, please...I can’t...” A scream of agony assaulted his inner ears. He doubled over, answering the pain tearing through his stomach. Only the cop’s grip kept him from collapsing onto the damp cement. Another pang knifed through his abdomen. The fire roared inside him.

“Are you sick?” Barely conscious, Kyle had a confused impression of the other man’s face—square jaw, sandy hair, warm blue eyes.

“They’re dying,” he moaned. Maybe he was dying himself. He retched and tasted blood. He was sinking into a rosy, fire-lit haze.

“Who? Who’s dying?” The policeman gripped his shoulders, shaking him, trying to bring him back. “What’s going on, boy?”

The address appeared out of nowhere, written in chalk on a wall of black stone. “Gardner Street,” Kyle whispered, slipping away. “29 Gardner Street.”

A recommended read! This is the first book I have read by Lisabet Sarai and if Necessary Madness is a taste of the caliber of her writing I can guarantee it won't be the last...Necessary Madness...

...this was an enjoyable, hot story involving some complicated characters who face many obstacles to find their happily-ever-after.

Share what you thought about Necessary Madness and earn reward points.