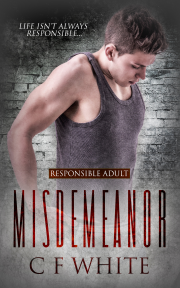 Publisher's Note: This book is the first in the Responsible Adult serial and is best read in order.

Misdemeanor is a dark, gritty piece of work... As for Flynn, well, I dare you to deny him entrance to your heart! With two outstanding main characters, plus a host of brilliant supporting characters, this...

Share what you thought about Misdemeanor and earn reward points.