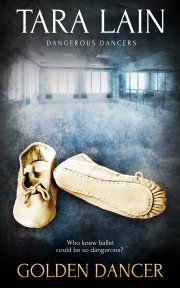 A reporter and the thief he’s investigating both fall for a golden dancer, forging a ménage of love and lies that could send one to prison and one to the morgue.

When the mysterious Terrebone ‘collects’ this beautiful dancer, too, Mac rushes to the rescue like a knight in shining cargo pants and plunges into a three-way passion that tears him between love and guilt. Can Mac keep investigating when his story could send one man to prison and another to the morgue? Will this reporter get his story or get his men?

Golden. Glowing. The sweeping grace of the statue took his breath. Capturing it had been no picnic. He didn’t much like some of the assholes he’d had to deal with, but play in the dirt, and you’re going to get some on you. It was worth it. Who wouldn’t want it, even if they had to steal it?

“What you working on, Mac Mac?”

MacKenzie Macallister started, then looked over his shoulder at his boss. Towering personality, tiny frame.

She tousled his hair so the curly mass fell into his eyes and he had to brush it back. “I think you’re working on your Terrebone-the-billionaire-is-a-big-fat-art-thief story.”

“And you would be one hundred percent right, boss lady. I know you don’t think a guy like that could be a thief—”

“You can say that again, big guy.”

He leaned back in his desk chair and looked not very far up into that damned-intelligent Chinese pixie face. “Yeah, but Terrebone tried to buy that statue from Von Berg last year. The old Nazi turned him down flat. Said it was some family heirloom. Yeah, well, I can’t find much record of that. Anyway, I heard Terrebone tried to buy it a couple more times through back channels. Clearly, the man would kill to get his hands on that statue. Theft should’ve been easy.”

“There’s a lot of art in the world, Mac Mac. Why would a billionaire collector have to go to big extremes like stealing? Seems unlikely to this lady.”

He rubbed a hand over his neck “Yeah, true. But you’ve trusted my instincts on other stories. There was desperation in the bid he made for the Golden Dancer. It’s worth a lot, but most experts agree he offered more than it was worth. Plus, the guy’s a player. Hell, he’s got the money and the technology to steal it. I think he’d just do it for fun. And to rip Von Berg a new one. There’s no love lost there, I’m told.”

She shrugged. “You keep believing, baby.” She patted his head, the little witch. “You want to take a break from fantasyland for a while?”

He gave her a look. Busting his butt getting stories no other online news source could get defined his job. Of course, he’d do it for free. Never tell her that. “Maybe. What you got?”

“Think I could turn you into an entertainment reporter for a day? Hirschfield is sick to death.”

She was so damned cute. “Sick to death of writing entertainment columns for the Daily Window?”

“And so how am I qualified to step into his patent leather shoes?”

“Debbie, she tells me your parents are ballet dancers, and you know everything about it, right?”

He glanced across the makeshift newsroom toward a bobbing redhead. Debbie the rat friend. See if he told her any more about his past. “Yeah, my parents are dancers. That doesn’t qualify me to write entertainment columns.” That was not entirely true. Hell, he could write anything.

She perched on the edge of his desk, squashing a few of his papers, short black bob swinging. She held an envelope. “I got this situation. The New York Ballet Theatre is doing their end-of-the-season tour in LA, and they gave just a few invites to press to see a special rehearsal of some new ballet show, you know? And Hirschfield got one, and now he can’t go ’cause he’s sick to death, and he’s freaking out that the Daily Window is going to miss this big scoop with some Russian ballet dancer or something. I mean he’s really freaking, Mac.”

She beamed. “There, you see, you know ballet like Debbie said, right? You can go and see this rehearsal and interview the guy, and Hirschfield will stop freaking out, and everything will be good, yes?”

“Yeah. With the Russian. Medv…what you say.”

Okay, he had goosebumps. Sixteen years backstage and in the rehearsal halls of ballet theaters kicked in. Jesus. He could actually meet the man considered to be the greatest dancer still performing. Also one of the most beautiful. Shit, he wasn’t sure why he’d thought of that. Medveyev. “He’s only half Russian. His mom’s English.”

“See. You’re the expert.” She bumped his shoulder. “The interview is tomorrow. Here’s the invite and the electronic press kit.” She plopped the envelope on his keyboard. “You know those ballet fans are crazy nuts, so impress the hell out of them, baby.”

“It’ll be good for you. Get you over your obsession with Terrebone for a day. Okay?”

“Okay. You got me. Tell Hirschfield not to weep into his lavender pocket square. I’m on the job.”

“Sure, Woo Woo.” She insisted that MacKenzie Macallister had to be shortened to Mac Mac. While he agreed the name was a bit aggressive in the Scottish department, he took his revenge with Woo Woo.

She did her roadrunner imitation over to another staffer’s desk in the crowded little room that served as an office when the reporters weren’t all at their home offices. That was one of the great things about online news reporting—working from home.

Maybe he’d head back to the home office, catch a cappuccino on the way and review the press kit. He could miss the worst of the LA traffic on the 405 if he left now, and be breathing ocean fumes in Laguna before dinner.

He looked over the other heads at Debbie, who was currently hiding behind her mane of red hair. Even her roots looked guilty. Threading between the desks, he approached his prey then stared down at her.

She held out for a minute, ignoring him, and finally looked up with a smile. Definitely sheepish. “Okay, don’t yell at me.”

“See if I ever tell you anything personal again.” He perched on the edge of her desk, and she made room.

She patted his thigh. “Oh, c’mon. I did you a favor. I’ve heard you talk about that dancer. You know you’re excited to be going.”

She had him there. “Okay, yeah, I actually am. Jesus, I should call my folks, but I’m afraid they’d jump on a red-eye and want to go with me.”

“Do they know the Russian?”

“Yeah, they’ve met him. But they can hold forth for a couple hours on his”—he raised his voice—“lyricism, athleticism and virtuosity.” 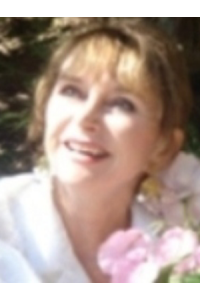 Tara Lain writes the Beautiful Boys of Romance in LGBT erotic romance novels that star her unique, charismatic heroes. Her first novel was published in January of 2011 and she’s now somewhere around book 32. Her best-selling novels have garnered awards for Best Series, Best Contemporary Romance, Best Paranormal Romance, Best Ménage, Best LGBT Romance, Best Gay Characters, and Tara has been named Best Writer of the Year in the LRC Awards. In her other job, Tara owns an advertising and public relations firm. She often does workshops on both author promotion and writing craft.  She lives with her soul-mate husband and her soul-mate dog near the sea in California where she sets a lot of her books.  Passionate about diversity, justice and new experiences, Tara says that on her tombstone it will say “Yes”!

This book was beautifully written. Tara Lain made this trio into such a beautiful love story.

As usual for Tara's stories, this one has a lot more going on than I can fit in a review, but the complex background stories will stretch your emotions to the limit. Mac, Daniel, and Trelain are all w...

Share what you thought about Golden Dancer and earn reward points.