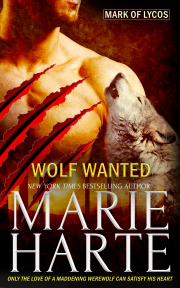 Book 2 in the Mark of Lycos series

Only a sacrifice can break his curse, and only the love of a maddening werewolf can satisfy his heart.

Trying to avoid an arranged marriage is easier said than done. But Anson seems to have accomplished the impossible. Now if he can put off fighting his twin to the death, he can avoid becoming alpha of his clan as well. The Wolf in the Forest hears and grants his unspoken wish, because one minute Anson’s in Alaska with his clan, and the next he’s in southern Germany surrounded by athmae—lust demons. One particular demon takes an interest in Anson, a very personal interest. Anson isn’t attracted to men, but around Liam, he can think of nothing but getting to know the demon in every way possible.

Liam cast a spell for a wolf, and Anson exceeds his expectations. He’s golden, he’s sexy and he’s a werewolf—a unique being in the world of shifters. After a hundred years of cursed living, Liam has a chance to finally break free from the spell holding his inner wolf at bay and embrace both his wolf and demon heritage. He never planned on falling in love with Anson, or of taking the maddening werewolf to mate. But his plans for a happily-ever-after come to a screeching halt when the evil sorceress who cursed him returns. She refuses to take no for an answer, and then she sets her sights on Anson…

Reader Advisory: This book contains scenes of group sex, and one scene of dubious consent.

“Put your name in the goddamn box,” Michael Barton said through gritted teeth, teeth that looked much longer and sharper than they had just moments before. “The Wolf in the Forest is waiting, and you know the spirit has a lot of clans to visit tonight, Anson.” When Anson continued to ignore him, his uncle lowered his voice. “Everyone else is doing it.”

Yeah, and everyone else looked downright miserable. Anson’s friends and cousins dragged their feet, forced into this stupid tradition because their elders had been forced into it. No escaping mandatory happiness, not for any of them.

Except maybe for Anson.

He pretended not to hear his uncle and edged closer to his escape. He now wished he’d listened to his brother’s warnings. A few more steps and he could scurry between the raised dais and the outer edge of the crowd into the surrounding forest. As long as he kept out of sight until the moon waned from its peak in the cycle, he could avoid the matrimonial noose for another ten years.

Everyone else is doing it. Please. He wanted very badly to answer, ‘If all my friends jumped off a bridge, should I do that, too?’ But poking a stick at an angry alpha in front of the pack didn’t make much sense, not since he wanted to live to see his twenty-sixth birthday. Hell, he’d only recently come into his full pelt. The pack barely recognized him as a voting member and wouldn’t have allowed him to attend the mating ceremony if he wasn’t directly descended from Lycos the Bold.

He tried to step away, to follow his twin who’d made it as far as the woods, when his uncle grabbed his arm and held him there. Anson watched from a distance as Fenris, his mirror image in every way, mouthed something at him, flipped him the finger and took off while he still could.

“Uh uh.” His uncle pulled him forward. “Don’t worry. Fenris isn’t as free as he likes to think he is.”

“Come on, Uncle Mike. You know this is bullshit. I’m too young to be tied down.” Once mated, a wolf couldn’t stray. And if the great Wolf in the Forest decided against him, he’d be stuck with a shrew for the rest of his life. Considering Uncle Mike was just shy of five hundred, Anson didn’t think his request to wait a while was all that unreasonable. Hell, most of the other matrimonial sacrifices were at least well into their second century. What the hell was Uncle Mike thinking?

He’s thinking the unmated females in this pack want Lycos’ kin. My damn birthmark is no blessing. It’s a curse.

He glared at his right forearm, at the star-shaped mark that glowed like the sun in the face of danger. A direct link to Lycos the Bold, beloved wolf, leader and harbinger of doom to his enemies. A thousand years ago, Lycos had beaten back the sorcerers and claimed the heart of the forest for those with animal blood. Years later, his descendant, Uncle Mike, had thrust the bears, foxes and the Red Clan beyond the border, where the rest of the magic-bent lived, among the humans.

“Boy, you will obey me in this. It’s time you passed on your legacy. Lycos lives on in you.”

Shit. As he’d suspected. He was no more than a wolf out to stud. How embarrassing. Anson pretended to falter on his feet and tugged at his arm.

His uncle tightened his grip and muttered under his breath, not impressed with Anson’s dramatics.

“I’ll shrivel into the worst kind of creature,” Anson complained loudly, staring at a cousin who’d recently mated. Poor Shane. “A henpecked shell of a man forced to obey his mate’s every insane whim.” His cousin’s wife didn’t particularly care for his comment, nor did her three ugly-ass sisters hoping to snag him tonight.

“Boy, pup or not, you’re going to obey me in this.” His uncle’s eyes glowed a bright green, a sure signal to back down.

Anson’s hackles rose as his uncle tried to put the fear of the Wolf into him—an alpha’s power, to instill fear and subservience in those he led. 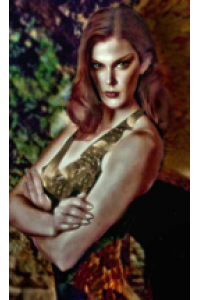 This book is full of mistrust, longing, confusion, love, except acne, and of course there has always got to be evil.

In my opinion this is a book about taking everything you was taught an...

This paranormal romance was a nice surprise and a quick read. I truly hope Jericho’s story is just as awesome as I love bear shifters!

Share what you thought about Wolf Wanted and earn reward points.