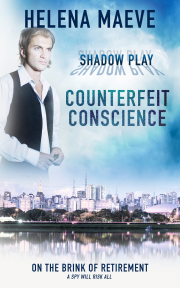 Book 3 in the Shadow Play series

On the brink of retirement, a spy will risk all.

The writing’s on the wall. Will Rowe has no illusions about retaining his post as the head of the largest Section field office in South America. Private contractors, some more lawful than others, already see to most of their interests. It’s only a matter of time before Will himself is made redundant. He’d like to think he’s made peace with the inevitable, but when a figure from his past offers one last chance to make a difference, Will can’t resist.

Caught between his duty to the agency and his commitment to protect his operatives, Will must persuade the man who nearly wrecked his career to give up the one and only constant in his world—revenge.

Ignacio was a low-grade runner for the infamous Macias cartel the last time he and Will spoke. Now he is the head of the family and a direct beneficiary of MI6 cost-cutting measures. Will knows that approaching such a man without his superiors’ knowledge or approval is a perilous undertaking, but he doesn’t expect his body and heart to become forfeit. As events spiral out of his control, Will finds himself at the mercy of an old lover intent on awakening desires he long thought suppressed.

Mistakes littered the apartment. They sat in ashtrays and swam in the amber dregs of red-rimmed glasses. They smelled of stale cigarettes and liquor sweat, hanging in the shut-in air like reproving ghosts of last night’s indulgences.

The wine bottle Will had peeled off before passing out in the small hours cracked underfoot as soon as he made to stand from the bed. Jagged shards sprayed the hardwood floors. He swore a string of long, polyglottal profanity and clutched the injured limb. The mattress dipped and sighed beneath him. Curses did no good. Taking time to pry out the splinters from his soles was a delay he could ill afford.

Naturally, he missed his train. And the next two after that.

Running up the stairs at the metro station two blocks from the office was out of the question with bandaged toes and a pounding hangover. Will settled for an awkward saunter, squinting behind dark shades at the silver ribbon of the road.

Sao Paolo was too damn bright in the morning. Worse, the ocean breeze had dispelled the cloud cover during the night, doing away with all hope of much-needed rainfall.

“Good morning, sir.” Luis, the night watchman, buzzed Will through the metal gate. “Looks like we’re in for another scorcher.” He was a reedy figure, in his twenties, and cleared for only the most basic tasks.

So far he’d been spared by the cuts that had befallen the rest of the office.

It might have been his wide, indefatigable grins. They seem to burn brightest in the early hours.

Will made a noncommittal sound. “Here I thought marveling at perfectly ordinary weather was a British pastime…”

“You’re rubbing off on us, sir,” Luis teased gamely. “Oh, your eight o’clock is here.”

“My what?” Will straightened with the news, aching shoulders drawing back of their own accord.

Luis nodded to the black sedan parked under the fig tree at the rear of the yard. It was a nondescript car with local plates. It didn’t even come with tinted windows. The interior probably smelled pine fresh, unused.

Will’s stomach sank. He trudged slowly up the crumbling stone steps, the echo of his footfalls ringing out against barren white-washed walls. On the first floor, Cleo was already clacking away at her desk. She had pinned up her hair today, but corkscrew curls still escaped the bun to dangle over the ruffled collar of a demure navy dress.

She looked up when he lingered on the threshold, but her gaze softened as she took in the shades. “You look terrible. Another bender?”

“Tell me something I don’t know.”

Will wrested off his jacket and tossed it to the empty desk opposite Cleo’s.

Six months ago, the office had teemed with life. They’d thought themselves lucky when they only lost five people last December. The first round of pink slips had been a challenge to accommodate, but not a fatal blow. The department had swapped tasks around, adopted a creative approach to cost-cutting. They made use of local talent whenever possible.

Then the second round came, guillotining what was left of their operation.

Even spies had to keep to a budget. And when that budget became sheer pittance, the writing on the wall no longer seemed scribbled in lemon juice.

Will tugged a hand through his hair, wishing he’d thought to comb it back before he left the house. Straw-pale strands drooped into his eyes despite his best efforts to look presentable.

The language in which it is couched adds greatly to the story for me. A woman is described as “a Winona Ryder of the favelas, with a knack for matchmaking” – Wi...

This is the fifth in the series – and I would recommend that you read them in order...even better, read them one after the other...Can I tell you how it ends up? Possibly not, because there is bo...

Share what you thought about Counterfeit Conscience and earn reward points.

Helena Maeve - Because Two Men Are Better Than One Feature

Thank you, Because Two Men, for hosting me today. It’s with a sigh of relief and a slight pang of regret that I watch book five of my six book series Shadow Play fly the nest for general release.

Hi, Divine Magazine, and thank you for having me. I’m Helena Maeve, your friendly neighborhood writer and self-confessed globetrotter. Stories have always come easy to me, the more unconventional the better, but as a queer lady it took me a good while to give the romance genre a shot.