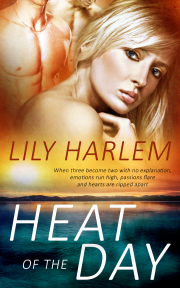 Heat of the Day

Everyone can remember a perfect summer—one with endless blue skies, a heart brimming with true love and nights full of hot, sweaty lust. Well, we’ve just had a summer like that, Piper and I, and it was spent in Spain with a man who had that certain je ne sais quoi that we couldn’t resist.

Seraphim came into our lives and blinded us with his beauty, his charisma and his exotic charm. His generosity with his mind, his affection and his body blew us away and the three of us became a joyously tangled trio who needed nothing more than to be together.

So when he left, when we had no way of tracing him, the despair was black, the pain raw and our only comfort was each other. But why did Sera leave? What would make a man walk away from his lovers? And if he showed up again on the doorstep, what the hell would happen after so much angst? One thing’s for sure, it would be an explosive reunion in many ways. Absence might make the heart grow fonder, but it can make the rest of the body highly volatile as need wars with hurt, and pain collides with desire.

Flynn tipped his head and studied Piper. The setting sun, hovering above a watery horizon, had cast orange and lilac shadows on her face, highlighting her pretty features.

“Do you in your heart of hearts think he’ll come back to us?” she asked, hope in her eyes but defeat in her expression.

“I really don’t know.” Flynn’s own heartstrings were being tugged by Sera’s absence, though he was trying to stay strong, for Piper’s sake. But the truth was, Seraphim was part of them both—the wind in their sails, the melody in their ears—and he had been for five glorious summer months. Being down one third of what made them feel whole was like losing a limb. “We’ll just have to wait and see if he returns from Portugal.” He shifted on the rock they were perched on and stared out to sea. His ass was starting to complain about the hard surface.

“Will you play for me tonight?” Piper asked, nodding at Flynn’s guitar leaning against an adjoining rock.

“Of course. What do you want to listen to?”

“Something that makes me think of him. I’m feeling melancholy. Do you mind?”

“No, of course not. Filling my head and ears up with his favorite songs makes me feel like I’ve spent time with him.”

“I know what you mean.” She paused. “It’s good to get on with things, not mope, but sometimes I can’t help it.”

“That’s fine. We miss him. If we didn’t it would mean we hadn’t cared and we did…we still do.”

“Yes, a lot.” There was so much to miss about Sera, from his long, dark hair that he was fond of twisting into a knot on the back of his head, to his lean, strong body and his intricate half-sleeve tattoo on his right arm. And damn, the guy knew how to use what he had, spectacularly, when things had gotten hot and carnal.

“Shall we head to the caravan?” Flynn said. “I’d rather play there. I’ve got a numb butt sitting here.”

Piper sighed. “Yes, I suppose so, though I hate that my day off is nearly over.”

Flynn wrapped his arm around her shoulders and pulled her close. He set a kiss on her head, enjoying the smell of her sweet hair and the way it tickled his face. “But at least we’ve had a day off together this week, and besides…” He lowered his voice. “It’s not over yet. There’s still more time to have fun.”

Piper looked up at him and a smile tugged her mouth. “Yes, you’re right.” She placed a firm kiss on his lips—a kiss that said she loved him, wanted him, needed him.

Lily Harlem lives in the UK with a workaholic hunk and a crazy cat. With a desk overlooking rolling hills her over active imagination has been allowed to run wild and free and she revels in using the written word as an outlet for her creativity. Lily's stories are made up of colourful characters exploring their sexuality and sensuality in a safe, consensual way. With the bedroom door left wide open the reader can hang on for the ride and Lily hopes by reading sensual romance people will be brave enough to try something new themselves? After all, life's too short to be anything other than fully satisfied.

Piper and Flynn are left broken hearted when their summer fling goes away for a weekend and never returns. They try to put Sera out of their minds and make plans for the future. Sera is worried about...

Sun, sea, sand and a broken-hearted couple. This is an emotional, beautifully written story with a great plot and characters that make you care.

Share what you thought about Heat of the Day and earn reward points.

Inspiration for characters comes to me from a variety of different places. For example in Dark Warrior (an MM novel set in Kenya) I’d seen a gorgeous picture of a man from behind who grew in my imagination to become Malik, a strong tribal man who is full of passion, very brave and modern thinking.

Thank you for inviting me to Fresh Fiction today it’s great to be here. I’ve brought with me my new novella HEAT OF THE DAY. It’s a ménage a trois story with M/F, M/M and M/F/M scenes in it and set in beautiful Southern Spain.

I’ve been lucky enough to spend quite a lot of time on the Costa Del Sol in and out of the holiday season. It’s a beautiful place, there’s always something going on and the people watching—if that’s something you enjoy doing, which I certainly do—is incredible.