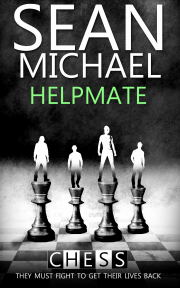 Book 4 in the Chess series

Knight is home from the hospital, so everything should be back to normal, right? Things are never that easy, though, and the men of Chess must fight to get their lives back.

Knight has returned home from the hospital, but is far from recovered. Things seem to be going well, but depression slowly winds its way around Knight, and he spends all his time in bed sleeping, slipping farther and farther away from his lovers and life.

Rook just wants everything to go back to normal now that their lover is home and Bishop is out of his depth when it comes to Knight's depression. Can Jason figure out what's wrong and take the steps needed to help Knight find himself again?

The struggle has just begun in Knight's recovery—are the men of Chess up to the task? Find out in this fourth instalment of the Chess series.

Jason stopped halfway up on his inverted sit-up, abs screaming. His legs were hooked over the bar, his thighs trembling as he fought to hold himself up.

He grunted and let go, head swinging toward the gym floor.

“Careful, baby boy.” Bishop came in, catching his shoulders. “You don’t want to bang up this pretty head.”

“Bish.” He was breathing hard, sweat pouring off him. “Ab. Ab work. Should have…” He should have waited for a spotter.

“You know better than that.” Bish put an arm under his shoulders and the other under his knees next to the bar, picking him up, then laying him flat on the ground.

“Sorry.” He’d just become engrossed in it and had forgotten his own rules about working out on one’s own.

Bish crouched next to him, big hand warm on his belly. “You got something you need to talk about?”

“Just got into the rhythm, you know?” Things had been so harsh, for months, after Knight had been hit by a snowplow. All that time with Knight out, then in the hospital. Jason didn’t think anything was going to be normal again. At least they were home now, right? All of them.

“Yeah?” Bishop didn’t look like he entirely believed him.

“Yeah. How’re you?” Jason had it easy compared to Bish and Rook, really.

Bishop shrugged and rubbed his face. “Glad I’m not at the hospital today.” They’d brought Knight home yesterday, which in and of itself felt like some kind of miracle.

“Me too.” Impulsively, he sat up, pushed into Bishop’s arms and took a hard hug. As tough and stoic as Bish was, he was the best friend Jason had.

Bishop hugged him right back, not hesitating for a moment, and they stayed right there, holding on for a long time. They just breathed together, clinging and supporting each other.

“Did he have a decent night?” Jason asked. Knight was in Bishop’s room, while Jason had moved his stuff in with Rook. It just made the most sense under the circumstances.

“Yeah.” Bishop let him go slowly and leaned back against the apparatus. “Knight did. I woke up every twenty minutes to check that he was still breathing.”

Jason nodded, chuckled. “I bet. Rook was up at least four times, just to go check on you two.”

“I know.” Bishop sighed and stretched, turned his head from side to side and rolled his head on his neck, clearly trying to work out kinks. “It’ll get easier, right?”

“Yes. We just have to find normal again. At least normal for now.” Jason sighed. In the time he’d been with the guys—how long had it been? Seven months? Eight?—they’d changed ‘normal’ a lot.

“Yeah.” Bishop snorted. “Like we were ever normal. You thought we were a bunch of pervs when you first met us.”

“You are a bunch of pervs.” He fought his grin.

Bishop chortled. “I’m not taking offence at that only because it’s true.”

“You want to work out?” he asked, knowing it was something he could give Bishop.

“Yeah, I could use a good hard workout.”

“Yeah, me not so much right now, huh?” At least not his abs.

“Anytime.” He stood on shaky legs, grabbed a towel and his water. Hydration, hydration.

Bishop shook his head. “Don’t force me to make a rule that says you can’t work out alone anymore.”

“A rule?” He blinked over, surprised. They were still doing that, even after…everything?

“I don’t want to, but you could have seriously hurt yourself today, Jason. We can’t lose you.”

“Then no more working out on your own, okay? If I’m not available, get Rookie to spot you.”

“I will.” At least the hard workouts.

“Good.” Bishop kissed him, hard. That wasn’t helping the weakness in his knees. “Maybe there’s better things to do than work out.” Oh, it was delicious, having Bishop’s attention turned on him.

Bishop wrapped an arm around him, hand on his ass, to pull Jason up against his hard body, and Bishop’s second kiss took no prisoners. It made him breathless, made him arch back over Bishop’s arm and moan. God, he was in good shape, but Bishop could make him feel, not dainty, but not big either.

Bishop slid his free hand along Jason’s chest and belly, leaving behind a trail of warmth. Jason’s prick jerked, pushing against his sweats. Bishop kept moving his hand downward, only stopping at Jason’s waistband to tease his fingers in beneath it.

Jason tried to suck in, to give those questing fingers more room, but his abs really were shot. Totally shot.

Bishop’s kiss got harder and the wandering hand slipped into his sweats to wrap around his prick.

What I loved most about this book, is we really see Jason develop in this one. Not just as a four in bed, but as an equal and at times a leader in which Bishop and Rook both defer to, during the most...

This fourth volume is another great installment of the series. If you like sexy men who don’t necessarily agree about what needs doing but learn to trust each others' strengths, if you love...

Share what you thought about Helpmate and earn reward points.