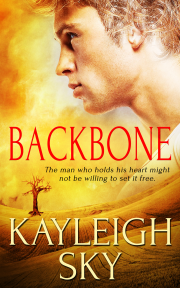 Struggling to survive in a deadly new world, Brey Jamieson soon discovers that the man who holds his heart might not be willing to set it free.

A universal vaccine eradicates all known viruses from the human population, but in the wake of this miracle, a deadly new virus suddenly surfaces. As the death toll rises, people riot in panic and civilization collapses.

Brey Jamieson, a convicted felon, is suddenly set loose in this violent new world. Desperate to reunite with his family, he sets out on a journey across the country but is captured by a brutal man who plans to sell him into slavery.

Hank Kresnak is a cop in the new world. It is his job to preserve the law. But when he sees Brey, his belief in everything he has built his new life on begins to crumble. Memories of a dark and terrible time reawaken. He was the cop who arrested Brey, and with one look into Brey’s eyes, he knew his life would never be the same. He was a married man with two daughters, but he couldn’t forget a man he barely even knew. Now his wife and daughters are gone, and he must struggle to save the man of his dreams from a nightmare fate.

Reader Advisory: This book contains scenes of violence and reference to rape.

The man was bent over inside the gas station. Naked. Tied down.

Hank gave a tug on Trixie’s reins and pushed on through scrubby brown hills. The sky was a high, flat blue and a dry, astringent smell filled the air. Hank breathed deeply, inhaling a faint tickle of dust. Below was a spit of a town—just a gas station and an unused diner.

His life now. But, fuck, he didn’t want to see this. He was a cop, for godsakes. He was supposed to break up fights and put bad guys away. In his old life, he knew the homeless man who rummaged in the alleyway behind the Thai Palace by name. He guarded a social worker named Joy who came to take a five-year-old in pink barrettes out of a crack house where her daddy had knifed her mommy to death for forgetting to put ice in his Pepsi. He dodged a TV somebody tried to drop on his head out of a fifth floor window. He took complaints and made reports. He hauled in pimps, drug dealers and drunk and disorderlies. He went after bad guys.

Guys like Thom—who bounced and wobbled in the too-hot sun. Animated. A friendly salesman.

Laughter floated in the air.

Christ, he wanted to go get that naked man. Wanted to grab him and run off with him.

He wanted his old life back. The life with the dance recitals, soccer, movies with Beth, game night with the girls, work, bills.

He liked that life. It was a good life.

Then a company called Bio-Gen Tech had come out with a vaccine called Pox Vac and for only pennies a shot, almost all viruses—flu, colds, HIV—had disappeared. Conspiracy theorists claimed that Pox Vac was really nanotechnology funded by corporations to control the purchasing habits of consumers. To them, that was the only way Pox Vac could make sense. Otherwise, it was un-American. There was no profit in cures. Hank scoffed at that. The girls had got their shots. Beth too, but he hadn’t. Lazy, he guessed.

He didn’t like to think about that, but it was a part of the end—like summer’s last barbecues and early twilights.

Then people had begun to die.

They’d called the new virus Eve. By spring, shell-shocked survivors had scattered out of almost-empty cities. Now, three years later, he lived in a half-dead world with people like Thom Donnell, the bulbous, waddling former insurance salesman, because that’s what Thom was before—a salesman. Still a salesman. Gesticulating avidly to his customers between slaps to the naked man’s ass.

It made Hank’s blood boil.

Brey didn’t know where he was anymore. He thought he used to know. But now he wasn’t sure. His face scrunched up, but he didn’t feel it. All he felt was that bar under his belly, and he wanted to get away from it, but he couldn’t. His position confused him. He didn’t like it. He couldn’t get a good breath in, and his legs shook. He was hot, too.

Lemonade, he thought. That would be good. Under the veranda by the pool. A ball game on TV.

Sweat stung his eyes, and he blinked grit away. There was concrete beneath him. A concrete floor. Oil stains. Oh yeah. A garage.

Nobody looked at him, though. His voice wouldn’t come out. Only a raspy breath that he couldn’t quite catch. Noise rang in his ears—booming, raucous, shrill.

He struggled, metal bit into his wrists, and the pressure on his belly made his head swim. He was tired. Too tired for this. He didn’t want to do it anymore. Shame flooded him like hot water—itching, burning and stinging. Surreal. Out of nowhere. His memories of getting here swirled with images of swimming pools, orange and yellow leaves, a cell with bars, a blue strobe light, bare dry hills and a fat man smiling brightly.

He couldn’t remember coming here, undressing or bending over the bar. Panic fluttered inside him, and he began to pant again. Please God, please. I don’t want this. I don’t. But he wasn’t really sure of that anymore.

One of the men grabbed onto him and slammed him against the bar. Pain burst inside, and his thoughts scattered again. He tried to grab on. Imagined a pool, lemonade, Goldy chasing tennis balls.

The drone of a TV.

But all that came out was a rasp, a whisper, “Help me.”

Followed by a voice that grunted in his ear, “Who’s gonna help you, pretty boy?”

Him, he thought, painlessly now, floating away again. Him.

Wobbling in the shimmers of hot air outside the garage, Thom swung a look at Hank as Trixie clomped out onto the pavement. He squinted in the sun, an arm up to shield his eyes. Hank squinted too. The shapes in the garage were a blur—two men inside, one standing outside. Then the man outside backed up and gave the person tied up a slap on the rump. His palm landed with a loud cracking sound. The man swayed, legs collapsing before he could lock his knees and struggle back up.

Hank closed his eyes. He felt almost lucky for a moment, almost glad that his wife and daughters weren’t here. Beth and Annabelle and Matilda… They broke his heart. They were gone, and he was here in this horrible place with Jack, Beth’s brother. After Beth and the girls and Lacy—Jack’s wife—had died, Hank and Jack had packed up and driven away through almost empty cities and towns. They hadn’t been going anywhere. They’d just driven. Saw skittish people who ran, armed people who stood guard, random car jams, empty stretches of interstate.

A small city with people walking on the streets, living in houses again, with farms and a cannery.

The people of Waterfall were happy to have Hank and Jack. Hank still wore his uniform and carried his service revolver. They wanted law and order, and once he’d seen this place, Hank hadn’t been able to leave. He couldn’t just walk away.

Opening his eyes again, he pulled in a deep breath and looked below. A man laughed, high-pitched, giggling. All three men were walking away now, leaving Thom behind in the sun outside the auto bay.

“C’mon back,” he yelled, throwing his hands into the air as they rounded the corner of the gas station and disappeared.

Hank swallowed bile. Waterfall men? Which didn’t matter because he couldn’t arrest them. Or Younger’s men? That wouldn’t matter either. The slaves came from Younger’s group. They started it. A loose mob of people that Younger took over. Doomsayers, Hank called them. They’d been ready for the Armageddon called Eve. They’d taken over an empty vacation resort. A lodge and cabins scattered throughout the pines—cooler, isolated. They’d taken slaves at the beginning of Eve. By the time anybody else had known about it, they hadn’t cared anymore. They just wanted to survive. It was Younger’s idea to rent the slaves to Waterfall. At the time, the population of Waterfall had been too small to work the farms and cannery. Now they were stuck with the devil’s bargain. But the slaves in Waterfall were better off, to be sure. They didn’t wear shock collars like Younger’s slaves. Dog collars, really. Modified for stronger shocks.

“Too easy to run up here,” Younger had once told him.

The slaves in Waterfall wore tracking collars. Bright orange posts surrounded the town and fields. A collar on anybody crossing the post-line sent a signal back to Hank’s police. No need to shock anybody in Waterfall because there was no way to run.

Before Eve, Younger had been an engineer for the Army—a puzzle to Hank. He’d probably had a home in the suburbs once, an Army pension he never got to use, a wife, children maybe. A man who’d barbecued in summer, mowed the lawn, washed the cars, lived a regular life.

Where people weren’t tied up and sold.

Kayleigh Sky is a writer of M/M erotica romance.

Kayleigh’s stories are tales of struggle and pain, loss and despair. Love is won in the battle to rise out of the depths of darkness. Victory is in the sweet bliss of happily ever after.

Once upon a time, Kayleigh hid out in a cold, dark garage reading a book her parents had just told her she wasn’t old enough to read. She was nine. The book? Giovanni’s Room by James Baldwin, a story of love between two men—well, actually the story was a little more complicated than that, but hey, she was nine

And then? A light, a passion, a sheer joy for love in all its manifestations awoke.

And love between two men—hot!

This story has a twist that will keep you on the edge of your seat. The characters were well-developed and had a lot of depth to them that has you falling in love with them. Their world was also well-...

Share what you thought about Backbone and earn reward points.

It took a couple of days after finishing the edits on Backbone and clicking on SEND before it really sank in that the book was done. At least the writing part of it. I wouldn’t be living in Brey and Hank’s world anymore. Surprisingly, that made me sad. I loved my guys. But, in another way, it was also somehow fitting for it to end as quietly as it had begun.

I know what it’s like to feel trapped in a life I absolutely ache to escape. A lot of you probably know what I mean. We get up, work, slog through our chores, close out the day, then start all over again. A lot of us are lucky to have a life like this though.