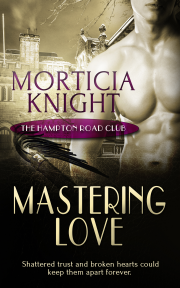 Evan sees a Master who could be his whole world and Ned sees a beautiful boy in need. But shattered trust and broken hearts could keep them apart forever.

Evan landed on his ex-Master’s doorstep after Master Gabriel dumped him for a virgin. He’d hoped Thomas would take him back, but he’s moved on with his new submissive, Linus. Evan has nowhere to go and barely a penny to his name. Fortunately, Master Aaron and his boy, Sam, invite him to stay at their guesthouse. Alone and abandoned, Evan aches for a Master who can give him more—if only he knew what ‘more’ meant.

Master Ned has finally decided to settle down in one place after traveling on the road for years. He’s always loved the Hampton Road Club—it’s a private sanctuary for men such as himself. The roaring twenties might be freer than ever, but the decadence of the sadomasochistic club could put its members in danger if they’re not discreet.

Ned’s on the lookout for an untried boy who’s ready to fully submit to him on a daily basis. In return, he plans to train and care for his submissive. If he can also find love, then his life will be perfect.

After Evan is introduced to Ned at the club, they have an intense encounter that catches them both by surprise. What should lead to a possible future for them as Master and submissive is destroyed when Ned mysteriously casts Evan aside. Evan wonders if he’ll ever be good enough to keep a Master, and Ned fears he may have lost the best thing that ever happened to him.

Shattered trust and broken hearts have to be repaired before Evan and Ned can find their way to each other—if it’s not already too late.

Reader Advisory: This book contains a scene of exhibitionism.

Evan glanced around the living area of the small, unfamiliar house that was to be his home until God only knew when. He swallowed down the emotion clogging his throat and turned to face the two men he’d only just met. They stood silently, undoubtedly waiting for his reaction. They’d been kind enough to offer him shelter when he had nowhere else to go, so he wanted to be sure that he conveyed to them how thankful he was.

I would’ve been on the streets in a strange town. No money. No friends.

“Th-thank you very much. I don’t what I would’ve done…” He couldn’t keep going, or he would embarrass himself by crying.

The older of the two, who’d been introduced to him as Aaron, stepped forward then placed a hand on his shoulder. Aaron was taller than both him and the younger man named Sam. On the drive over to the guesthouse with his ex-Master, Thomas, and Linus, Thomas’ new boy, Thomas had explained that Aaron and Sam were Master and submissive. He’d assured Evan they’d be more than happy to have him stay on the big property they owned. It included the structure where he’d be living, plus a grand home and a plant nursery. Located in the foothills of Altadena, it was in a suburb of Los Angeles, just over the hills from Hollywood. But his exact locale meant nothing to him for the time being. It was all a big unknown, everything too uncertain.

“Everything’s going to work out, Evan. We’ll all be looking out for you. Why don’t you have Sam show you around the grounds, get you acclimated? Then he can take you to the main house, and we can find some extra clothes for you to go with what Thomas already purchased.” Aaron seemingly pondered his words, glancing around the room as he did. “Some fresh towels too, and linens of course. As far as the clothing goes, you’re a bit taller than Sam, but I’m sure we can figure something out.” He let go of Evan then regarded his submissive. “Little Sam?”

Evan’s cheeks had heated at Aaron’s mention of Thomas buying him things. He hadn’t expected anything from his ex-Master—not after Evan had shown up at his door unannounced. It had been a crushing blow to discover that Thomas already had a boy, one who had come to live with him for good. That was when it had become all too clear that Thomas wouldn’t have any interest in Evan anymore. Not much longer after that, Evan found himself occupying what had been Linus’ old home only hours before.

Aaron had already strolled out onto the small landing. Sam motioned to Evan.

Evan chewed at his bottom lip. Sam furrowed his brow then leaned in as if he was sharing a dark secret.

“I get in trouble for that all the time from Aaron. When you get a new Master, he might not like it either.”

“Little Sam, are you and your new friend coming along then?”

“Yes, Master.” Sam leaned in again. “We’d better get going.” He snickered. “I wanna be allowed to come later.”

Evan followed Sam outside into the bright sunshine of the hot day, squinting against the assault of light. It was much warmer than he was used to from where he’d been living by the sea in Santa Barbara. As Sam prattled on happily about all his plants, flowers and trees, Evan tried to make sense of his explanations. He knew nothing about gardening or raising things. All he’d ever known was working in restaurants and diners. He’d grown up helping his parents with their diner then waited tables when he’d been with Thomas. He’d continued working at the same place with his last Master, Gabriel. Plants were a complete mystery.

He swallowed down tears again, his stomach queasy from the heat and the fear of what might become of him. Sam’s words fell into the background as he attempted to unravel how his entire world had disintegrated within a forty-eight-hour period of time.

“You have to understand, Evan. I’d keep you too, but Albert won’t agree to it.”

“But why do you have to have Albert at all? Aren’t I enough?”

Gabriel hadn’t been able to meet his eyes, but he’d made his intentions clear by the gruffness of his voice. Gabriel had used that tone a lot to make sure that Evan always agreed to whatever he proposed.

“If you were in my shoes, you wouldn’t even have to ask such a thing. Albert’s eighteen. He’s never been touched by another man. This is a rare opportunity for me, and I don’t want to… I won’t lose it. I can train him to my specifications. You have your charms, but you were already with a man for almost three years before I had you. You aren’t new. We had our fun, but it’s time to move on.”

Evan had never realized how words could have such a physical impact until that moment. It hadn’t felt any different to him than if someone had punched him in the gut. He’d never kidded himself that Gabriel was madly in love with him and truthfully, Evan hadn’t felt that way either. But Gabriel had worked so hard at denigrating Thomas to pry Evan away from him, he’d assumed that at least there’d been something there. And Evan had genuinely cared about Gabriel. He’d been a good lover and had taken care of him well. There had been times when Gabriel had been a bit brusque and wasn’t very affectionate, but overall, it had been a decent arrangement.

For men such as themselves, love wasn’t always readily available. They had to meet in secret, had to be careful they didn’t reveal their darker passions to the wrong man and risk discovery. The specter of institutionalization, even castration, loomed over them. For the sadists, prison was a very real fear. It was difficult enough finding another lover of men without adding the need to either dominate or submit into the equation. If they found someone who matched them in desires and they got on well, it was better to have that than nothing at all.

It had been Gabriel’s idea when he’d sent him back to Thomas on a bus from Santa Barbara. Evan had been so frightened over what would happen to him. Gabriel had controlled everything, even his money. All he’d left there with was the clothes on his back, bus fare and a few extra dollars for a meal or two.

“You won’t need anything once Thomas takes you back.”

Gabriel had laughed as if Evan’s well-being was of no importance. He’d already seemed irritated that he’d had to pony up the dough for the bus ticket.

“That sap mooned around the club here for months waiting for you to run back to him. He’ll take you back.” Then Gabriel had fixed him with an odd leer Evan had never seen before.

“And if he doesn’t? You’re still reasonably young, could pass for younger. You can always offer your favors for a price. Probably do pretty good too if you let men beat you.” He’d seemed conflicted, rubbing his chin.

“If I was sure Albert wouldn’t kick up a fuss, I’d keep you here. Make some extra cabbage on the side.”

The sweat poured off him, and the burger Thomas had been kind enough to buy him earlier was swimming around in his gut. He was doomed at twenty-three—of no use to any man unless they paid him for a quick fuck if no one else was around whom they really wanted. No one would ever fall in love with him. He would be alone forever, no one to take care of his needs. It was clear to him now that men only wanted a virgin. It was that way with women, so why would it be any different for men? He’d had his chance with Thomas when he’d been unspoiled, and he’d ruined it by believing Gabriel’s and the other club members’ lies about his ex-Master.

Reviewed by The TBR Pile

Share what you thought about Mastering Love and earn reward points.