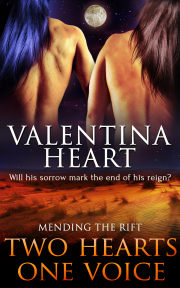 Book 3 in the Mending the Rift series

They are at war, fearing for each other, struggling with the upbringing of their children and the survival of their country. They are kings.

With the future of the throne secured, Rin and Merin still have little time to rejoice for their children or the unity of their kingdoms. Stuck in the middle of a battlefield, their lives prove to be once again at risk, and Rin heads out on a long journey home with his heirs, leaving Merin to lead their army.

Rin receives his rightful title of king from the Kari council and for once feels as if he belongs on the throne without Merin there to guide him. Missing his husband, he raises their children the best he can, but there’s no end to the war in sight and, after months of futile conflicts, Rin thinks he sees Merin cut down in battle.

Distraught and with no patience for his council, Rin threatens the Riki, making even his own men fear him. Can Rin cope alone without the love of his life and still win the war, or will his sorrow mark the end of his reign?

Customers also bought The Captain's Pet with this title

The Captain's Pet by Samantha Cayto

Add The Captain's Pet to your basket   Read More

Giving birth had been a terrifying experience. Honestly, no words could ever explain the terror and the pain, the premature doubts of not being as good of a parent as your children deserve. Just the impossibility of ensuring their survival was defeating enough. It was best not to speak of everything else that accompanied the trauma.

Still, while my every insecurity had a base in reality, the first sight of my babies, the very realization that I was the one to bring them all to life was marked with immense pride and gratitude. They were there because Merin and I had made sure of it, because I had protected them in my body and because the two of us were calm and composed enough to keep our wits about us and control our magic to the very end.

All the pain, from the very birth to that of our situation before, when every member of our kingdom had had a say in our happiness, and when too many had plotted against us despite not always acting on it, was worth it. I had brought life into this world and nothing could compare with the happiness tingling deep in my chest.

Merin was away from us most of the day, as was usual since we’d come to the battlefield. His wrappings were again bloody as he came to us at night tired and weary. But there was a kind of radiating happiness to him now, a certain dose of satisfaction that lit up his face as he saw us cocooned around each other, his sons cooing restlessly and his daughter fussing as she most often did. He was a content father but also a proud king.

Five days had passed. My wounds had healed and my chest had turned into one big sore. Tender to the touch, it made feeding even more difficult as I hissed each time my children’s heads pressed against me. The healers kept persuading me the little ones would be teething in a matter of days and my body would return to normal, but it seemed closer to an empty promise than reality.

“Rin.” Merin opened the tent flap and looked at me. “It’s time.”

I sighed, gazing at my children, who were finally sleeping, and made peace with my fate. Kneeling on the bedding, I motioned for Merin to come closer, picked up our daughter and placed her in the crook of his arm. She started squirming right away, her cute little face wrinkling in the beginning of a cry, something Merin was becoming familiar with. Right away, he started rocking her, humming softly under his breath, but his eyes were filled with pure panic. It was generally the rule, if one started crying, all of them had to have their say.

The king’s pet reacted, as spoiled as she already seemed to be, calming down and gripping at his wrappings with her iron fist. I should know, the last time she caught at my hair I was left without a whole lock and had barely untangled the rest from between her fingers. The situation came with a valuable lesson, teaching me to allow my helper to braid my hair and braid the braids until there was none left within reach.

Absentmindedly, I rubbed at the naked spot on my skull before reaching for our oldest son and placing him in Merin’s other arm. The one solid sleeper of the four didn’t even stir and, holding a breath, Merin stood waiting for me.

I picked up the twins, taking one of them in each arm, already skilled in the position since it was the only way they allowed themselves to be fed. There was always at least some part of the twins’ bodies touching, and the healers were again full of impressions and reasons for it, things I only skeptically believed.

None of the twins I’d ever heard of were connected on that level and it made me uneasy. They were excruciatingly hungry at the same time, filled their waste wrappings simultaneously and woke up with one synchronized cry. It left me stressing about their future, the judgment of the public, the court. I worried too much.

As we headed toward the entrance, the helpers moved the tent flaps out of the way, allowing us to exit our temporary quarters with no more than a slight bow of the head. The light blinded me for the first few moments and I stood still, waiting to adjust, holding my children tightly.

The crowd gathered in front of us was almost overwhelming. People I’d seen during the long months at the front lines, some that were stationed at the far ends of the borders had still managed to reach us for the ceremony. They all looked expectant, pleased and, in some cases, I would dare say, proud. Their future rulers had arrived and they would have the rare privilege of witnessing a naming ceremony, something usually held in court in front of a selected few.

Merin’s voice was surprisingly loud when he spoke. It carried over the gathered soldiers, and the children in my arms stirred before cuddling closer and continuing with their dreams.

Two Hearts One Voice grabs the reader and doesn’t let go.  A clever balance of desperate times and personal joy, the third book in the Mending the Rift series resonates with emotio...

The story is full on emotions, mostly love and adoration, and a fine dose of lust that keeps things interesting. But there is also quite a bit of angst, and despair, and anger, and intrigue. The story...

Share what you thought about Two Hearts One Voice and earn reward points.

One of the questions I get asked most often in interviews is where I get my inspiration. Maybe it’s strange to be so boggled by the same question each time but for me it’s hard to imagine functioning any other way. I can’t envision not seeing stories in everything when it’s rather my norm to come up with at least a couple of plots each day. Be it movies, songs, stories, or everyday events, I get caught up in an expression, a phrase or just the complicated feelings a certain medium pulled out in me and every bit of it that causes a reaction is a potential story.