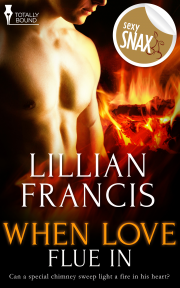 When Love Flue In

A soot-haired chimney sweep, an exploding flue and an uncooked turkey. It’s an unholy trinity that may make all of Dominic’s Christmas wishes come true.

Dominic is celebrating his first Christmas since his divorce, and although he’s spending it on his own, he’s determined to have a traditional Christmas morning, including a roaring fire. Unfortunately, Dominic’s chimney is blocked, which is why Reagan, a soot-haired chimney sweep, is head and shoulders up Dominic’s flue. Dominic is just lucky the man had a cancellation on Christmas Eve.

Unable to take his eyes off Reagan’s low-slung jeans and enticing arse while Reagan sets about the hearth with rods and brushes, Dominic knows five years is a long time to be obsessed with the man who sweeps his chimney every Christmas. This year there’s nothing to stop Dominic from acting on his desires—except his own insecurities.

An exploding flue provides the opportunity for more than just polite conversation and could be the catalyst for a perfect Christmas. But Dominic will need to stop hiding who he really is before a special sweep can light a fire in his heart.

In the end, it was surprise more than shock, really. For Dominic, it had been the sight of one skinny—bordering on bony—arse that had tipped the scales of realization and forever altered his world.

The arse in question wiggled enticingly, forcing Dominic to shift uncomfortably in the soft leather of his chair. He knew that the movement meant nothing. It was neither encouragement nor even flirtation. Reagan was obviously just jiggling his pole. And didn’t that statement bring all sorts of other images to mind that would do Dominic no good whatsoever in his current predicament.

Dominic should just leave the room and let the chimney sweep get on with his job without being subjected to his lustful gaze.

He never had before.

Of course, before, his wife Eleanor had always been present. A buffer to stem the immediacy of his thoughts—images and fantasies that he stored away until the darkness of those lonely nights when she was on spa retreats with her friends. Or, when those weekends were too far away and he was desperate and craving, he would ensure that the bathroom door was locked before he stepped into the shower and beat one off to his favorite fantasy.

Fantasies of stepping up behind the sweep, positioned just as he was now, arse high in the air while his head and shoulders were buried somewhere deep in the flue of Dominic’s chimney.

Not that there was any reason to hide Reagan’s head in the chimney. The sweep might not be handsome in the traditional sense that Dominic had often been told he was, but Reagan was interesting in a quirky, impish way that would have made him desirable even if he didn’t have a tall, lithe body. Even in Dominic’s fantasies, he found it hard to believe that Reagan would ever want him.

Who would crave the touch of a man who had injudiciously shackled himself to a woman for nearly a decade and pushed down that fledgling need to explore his own sexuality, just to please his father?

Why would Reagan, whose blue eyes twinkled with amusement when he spoke and who exuded a reserved self-confidence in his own sexuality, knowingly accept the hands of a weak fool on his skin?

So, Dominic banished thoughts of sucking up bruises on that pale column of lean flesh, which stretched from just below Reagan’s ear to the neck of his cotton T-shirt, or running his tongue over smiling lips to beg entrance. He refused to give headroom to burying his fingers in Reagan’s scruffy black hair, dark as the soot that fell in puffs and clouds from the chimney breast. He definitely didn’t imagine his fingers trailing down Reagan’s long face, exploring the rise of high cheekbones with just his fingertips while Reagan smiled at him fondly.

What he did allow himself to imagine was an anonymous fuck, no kissing or touching—no matter how much he wanted that—with Reagan not knowing who was giving him pleasure. In Dominic’s fantasy, Reagan’s arse would be bare, pale like the moon in the night sky. On his knees with his shoulders buried in the hearth, Reagan wouldn’t be able to see who stepped up behind him but he would be begging and eager, anonymity saving him from the disappointment of realizing it was Dominic. And despite never having experienced any part of this fantasy with anybody, Dominic would ease his way into Reagan’s willing body until he was buried balls deep in the sweep’s tight heat.

An avid reader, Lillian Francis was always determined that she wanted to write, but a 'proper' job and raising a family distracted her for over a decade. Over the years and thanks to the charms of the Internet, Lillian realized she’d been writing at least one of her characters in the wrong gender. Ever since, she’s been happily letting her ‘boys’ run her writing life.

Lillian now divides her time between family, a job and the numerous men in her head all clamouring for 'their' story to be told.

Lillian lives in an imposing castle on a wind-swept desolate moor or in an elaborate ‘shack’ on the edge of a beach somewhere, depending on her mood, with the heroes of her stories either chained up in the dungeon or wandering the shack serving drinks in nothing but skimpy barista aprons.

In reality, she would love to own a camper van and to live by the sea.

A true Christmas fairy tale. Reagan and Dominic are as sweet as Christmas fruit pies. Dominic's first time is funny, romantic, threaded with caring and so wonderfully hot. You have to read th...

Holy jingle balls, talk about some well written sexual tension. That's is one of the sweetest/hottest first time scenes that I've read and it was perfect for these two. It made me gooey inside and...

Share what you thought about When Love Flue In and earn reward points.

Despite garnering a mention in the mini blurb for When Love Flue In, nobody eats any turkey in this Christmas novella. In fact, although a variety of seasonal delights are mentioned, hardly any are consumed. However, our heroes do manage to bond over a mince pie or two.

To which I am referring to the title of a book. Although, the same could apply to character names, but that is a post for another day.
I have a love hate relationship with titles, and I think most authors would agree. Some come to you as an extension of the story, while others need to be dragged kicking and screaming into the world. Once in a while a manuscript remains obstinately nameless right up until the moment of submission. One of my beta readers had the honour of naming my last short story since my mind blanked every time I tried to come up with something. A cracking title it was too. Simple, perfect, and blatantly obvious with hindsight.