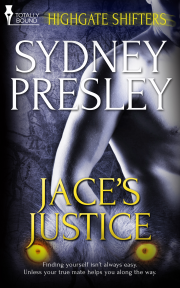 Book 1 in the Highgate Shifters series

Jace has always felt as though he doesn’t belong, that he’s surplus to requirements, alone and destined to stay that way for the rest of his life. His love for Louie, his true mate, is solid and real, but Louie has never shown Jace that they’re mates, has never given any indication that he wants them to be together. Jace is convinced that fate has got things wrong in pairing them—until a stranger arrives on pack land, throwing everything into chaos.

Louie has lived his whole life keeping his distance from Jace—and his emotions. He loves the man with a passion, but knowing Jace might be taken away from him at any moment means Louie has kept his mouth shut. Jace was found on the side of the road as a cub by their alpha, Sergeant, and Louie has always known that one day Jace’s true family will come back to claim him. To save Jace having to make a painful decision—leave Louie or join his family—Louie has remained in the shadows.

But life has a way of changing things, and with the stranger comes knowledge of some terrible things happening on another wolf compound. Things that the Highgate pack feel compelled to fix. The question is, will Jace and Louie mating also change things, or will they remain the same as they’ve always been, forever circling around their love and never admitting it through fear of being hurt?

The sound of the whip-poor-will gave Jace the willies. He could only hope that sometime in the future Louie would give him the willies too, but he didn’t think that was about to happen any time soon. To have Louie’s cock inside him—God, that was a dream. Louie hadn’t given him any indication he fancied him in that way, more was the pity.

Yeah, a massive pity. No use even thinking about it. Can’t change it. Well, I could, but if I tell Louie how I feel I’ll end up embarrassed when Louie tells me to fuck off. Because he will tell me to fuck off.

He shrugged off the thoughts, telling himself to buck the hell up. Pining wasn’t really Jace’s thing, but he was close to pining now. He usually dealt with issues internally, making out that nothing bothered him, although it was clear they did. His scowls and short answers let the rest of the pack know he wasn’t to be approached unless they wanted their heads bitten off.

He laughed, imagining biting their heads off literally. Sergeant, the alpha, would have something to say about that. And upsetting Sergeant wasn’t something Jace wanted to do. The man had been good to him—to everyone.

Jace sighed. The ache in his torso was almost too much to bear. It reminded him of Louie again, not that the man was ever far from his thoughts. Being near Louie so often on a daily basis, even though they didn’t talk much beyond hello or a casual sentence or two… Well, that was killing him.

Could a wolf shifter die from never uniting with his mate?

And Louie was Jace’s mate, no doubt about that. Jace felt it in his goddamn bones. It was just a shame Louie didn’t feel it too. Or if he did, he hadn’t shown it. Louie acted like any other pack member, nothing more. No ‘accidental’ touches, no secret looks across the room.

Jace stood on the rear porch of the main pack house and stared out at the compound. He ought to go for a run, really. Shift and streak around until he was out of breath. He had to do something to get this feeling of restlessness out of him. This feeling of loving someone who didn’t return the emotions. How long should he wait? That was the question—the very big question that loomed over him each and every day. How long would it be before Louie got that smack of emotion in his chest where he realised they were meant to be together? That they were mates? Intended for one another since birth?

It seemed Jace had been waiting forever, that he’d loved Louie forever—and he had. The longing inside him had grown to massive proportions, threatening to swallow him whole.

He wished Louie would swallow him whole.

“Enough with that crap,” he muttered.

To stop himself thinking of innuendoes, Jace stripped out of his clothes then put them in one of the clothes bins on the porch. He stood with no care that someone might see him naked. It was commonplace on pack lands for men and women to stroll nude before or after a shift, completely at ease with their bodies and who they were—what they were. What Jace had to be mindful of was getting a hard-on when Louie stripped in front of him. And Louie not getting hard was surely an indication he didn’t fancy Jace. Jace had never seen Louie’s cock as anything but flaccid, so if Louie had feelings for Jace, he was damn good at controlling his emotions. Then again, Louie always got dressed quickly, with his back turned to anyone who was there. A few times Jace had hoped that was because Louie was hiding one hell of a hard-on, but there never was a bulge in his jeans when he turned round fully clothed.

If Jace and Louie were meant to be together, why hadn’t it happened yet? They were well into adulthood. Most wolves, as far as he’d seen growing up, had got together during puberty. Then again, there were a few who had mated later in life.

So there’s hope yet.

I liked this book. The writing was well done and fast paced. I enjoyed how the book was more emotionally driven than just about the sex. It does leave the end on a bit of cliffhanger to find out what...

The focus of this book was on Jace and Louie and how they could find a way to overcome their reservations about each other, their insecurities, and their mutual virgin status. The way that was written...

Share what you thought about Jace's Justice and earn reward points.